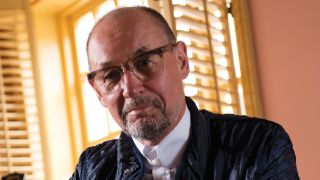 “I got interested in picking the guitar up after seeing The Rolling Stones in Cardiff, at Sophia Gardens on February 28, 1964. The impact of that first time set me off, as well as hearing records by Chuck Berry and Otis Redding. By 1965 I was in my first band and Kenny the drummer put on a blues record at his house, an early Chess record, but the next one was Booker T and I immediately just stocked up on stuff like that from Spillers Records in town. “Cardiff’s a port area so lots of clubs, music and new things were brought into our world, just like in Liverpool. It was the black community around Tiger Bay that drove the change in culture. They dominated the fashion, the music, and they dominated the social habits – I mean smoking dope. It was a pretty lively time. We got into that and listening to soul records. Blues came later.

“There was a particular moment when blues overtook my life and that was when I was working with Eric Clapton. In 1971, I was living in London and I got hold of the Robert Johnson early recordings. At that time I thought, ‘These all sound the same to me,’ and carried on listening to soul and a bit of Johnny Winter. I first met Eric when he was recording Slowhand in 1977. But it wasn’t until 1994 when I toured America with him that he played Jimmy Rogers to me in his car. It was a defining moment in discovering the blues. “I’m a learner; I’m not naturally gifted as a player. Eric’s depth and knowledge of all kinds of music, not just blues but early jazz, Bing Crosby, so much other stuff, he put that knowledge into a style of playing that’s like a vocabulary. I understand a lot of what he says.”

“I heard this in the 60s. From Shame Shame Shame to Big Boss Man, we’re talking about a guy who wrote relatively simple songs, and they’re the hardest ones to write. The riff Jimmy plays is just about as perfect and as simple as you can play, but it says so much. When you start playing guitar, if you get this Jimmy Reed thing down, it opens a door to playing thousands of songs, it lets you dream a little. All it is is a simple little three-chord trick, and it was influenced by Eddie Taylor. I’m still playing this now in my set, still working on getting it right. Jimmy’s got a real place in the jigsaw of blues when a lot of the rest of us don’t even get into the box.“

“I got to meet a lot of people through working with Eric, but I never met Albert King and apparently that was a good thing! This is from a live album I must have picked up in the 70s and this song, when he hits the notes after his spoken intro, I’ve never heard anything as powerful. Keeping in mind he does a lot of it on the one string, this thing is like a bullet and it will kill you. I find it frightening to hear. I can understand most music playing, and I can imitate a bit of BB cheaply, but I can’t do Albert – he’s completely out there. It’s the most powerful statement of a guitar after vocals I’ve ever heard.”

“This song is big in my world as from about 1984 to 2007 I had a job as a touring and session guitar player – that’s when I finished working with Roger Waters. I was a rhythm guitar player, playing specific parts. The first time I heard this I was travelling in a car with Eric Clapton in Dallas in 1994. He hit me with this on the stereo, then gave me the cassette. Jimmy Rogers was the king of the turnaround, the licks to back somebody in a combo. I’ve got a bag full of things that I learned from Jimmy – I only wish I could play them when I want to!“

“Blind Blake is a virtuoso player from the 20s – there weren’t many at that time but there was him and Lonnie Johnson. Ry Cooder did Police Dog Blues and Ditty Wah Diddy – these were Blind Blake songs, and he brought them into my world. I practise all the time, always looking for something new to try. I got the album and I focused in on Southern Rag. It’s a man playing a guitar but he’s playing it like a piano – rolling, stride piano playing. I’ve been working on perfecting this for years.”

From: Lightnin’ And The Blues [Herald Recordings, 1954]

“This is Lightnin’ gone electric. It’s from a double album and when I heard it, Volume 2 got me. Lightnin’ invented this style of playing but, again, who was he listening to? You can hear he’s so comfortable and he’s driving the bass player crazy, who’s trying to follow him but can’t. In the mid-60s we were told that blues had to be an eight or 12-bar. No it doesn’t. His motto was: “Lightnin’ change when he want to change.” I still watch video clips of him – he’s playing with his fingers, and I’m going, “What the hell is going on there?”

“Mississippi John has the most beautiful voice. You think to yourself, “What did they listen to? Who were their influences?” This really brings home that we’re the imitators and they were the originators. Mississippi John’s voice on Will The Circle Be Unbroken and* Since I’ve Laid My Burden Down* is untouchable, alongside such simple picking.”

“If I had been on just one of Eric’s albums, I’d like it to have been From The Cradle. Eric opened the door to the blues for me. *From The Cradle *was an all-live recording, no overdubs. But the solo on Five Long Years… talk about fire, talk about passion. When I mentioned the uniqueness of Albert King, there’s nobody else out there that could have done what Eric did. I’m a bit biased, of course [laughs], but Eric’s a great singer as well as a guitarist. Contemporary guitarists have to be able to play but they’ve also gotta be able to sing, that’s the icing on the cake. That’s where Robert Johnson had every apple in the bag. And Eric’s got it too.”

Andy Fairweather Low’s Live From The New Theatre is out soon on DVD/CD: see www.andyfairweatherlow.com for details.