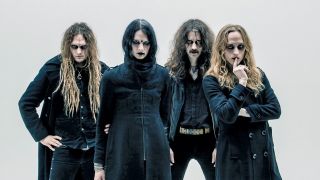 It was a brief but fertile moment: in the mid-00s a bunch of Swedish lunatics barely out of their teens formed a coterie of bands – Eviscerated, Degial, Necrovation, Graveless and Katalysator to name a few – all determined to bring back xeroxed black and white covers, demo cassettes, proto-death metal references like Nihilist and Master and that classic lo-fi sound.

It was all gone in a flash. Many didn’t even get to record an album, but when they did, the results were often unexpected. While Degial stayed true to their early Morbid Angel and Sarcófago fixation, Katalysator morphed into Invidious before its alter-ego In Solitude took over. Morbus Chron stopped defiling the graves of Autopsy and early Death, only to go behind the wall of sleep with tons of hallucinogenic drugs as fuel.

Instead of running into a retro cul-de-sac, the scene’s early orthodoxy had instilled a confidence that allowed them to reach something far richer and more personal. And as personified today by their grand and ambitious new album, The Children Of The Night, it’s never been truer than in the case of Tribulation.

Not many saw this development coming, however, and rightfully so; both the confusion around their name (Tribulation was also the moniker of a cult crossover Swedish band from the late 80s) and the naivety of their demo and 2006 debut EP, Putrid Rebirth, didn’t suggest longevity. At best, some viewed Tribulation as ‘the old-school death metal plaything from that bloke in Enforcer’.

Guitarist Adam Zaars feels the need to put those early days in perspective: “I can see why it happened and why we sounded the way we did in the beginning. You’ve got to remember that although it had been four years since Jonathan [Hultén, second guitar] and I started playing together, I was barely 16 when we started Tribulation. We were dedicated from day one but just didn’t know anything, like what a booking agent was and so on. Then other things happened, like me joining Enforcer for instance. Overall, 11 years went by in between our first rehearsal and The Children Of The Night. That’s a lot of time and during that interval, many things have changed, including in our personal lives. Still, my very first band was with Joseph [Tholl] from Enforcer and it was a weird mixture between the Misfits, punk rock and heavy metal and somehow, I feel those elements are still present now.”

By the time they entered Enforcer’s Olof Wikstrand’s studio to record their 2009 debut album, The Horror, Tribulation’s sound was already shifting. It wasn’t just the music that owed as much to Swedish thrash/death pioneers Merciless as to the more melodic side of Watain (“We knew we wanted to do a death metal album but we also had this weird fantasy of performing instrumental, original soundtrack-like music and, eventually, we merged those two”) but it was the whole package.

Friends since their early teens, Adam and Jonathan bonded over their love for music and drawing, becoming full-time graphic designers, and The Horror’s title and elaborate packaging was an explicit nod to their sources of inspiration, the track Spawn Of The Jackal’s clear references to The Omen proving that the fascination went beyond the superficial. Things started to happen at a faster pace when Adam left Enforcer in 2011 after five years: “I had enough,” he explains. “It was great fun but this was never my band or my vision and I thought it was time to do my thing.” /o:p

With Tribulation as everybody’s main focus, the band switched drummers and, with members dispersed across Sweden, the whole lineup moved to Stockholm after the completion of their epic sophomore full-length, The Formulas Of Death. And now, there’s The Children Of The Night, following a two-track single purposely titled The Death & Rebirth Of… that included a demo version of a track that was re-recorded for The Children… and a song written during the Formulas… sessions “as a good way to link the two albums together”.

Recorded at former Entombed member Nicke Andersson’s brand new recording facility (“He wasn’t really involved aside from offering coffee, but he let us use some of his cool vintage Hellacopters gear”), the album ventures fearlessly down the new, shadowy avenues The Formulas Of Death opened up.

Relying once again on old silent movies for its cover (a drawing inspired by Irma Vep, a femme fatale in the French dark thriller Les Vampires, shot exactly a century ago) its title is directly stolen from one of Dracula’s most famous punchlines (“Listen to them, the children of the night, what sweet music they make”). By summoning the spirits of 1920s expressionist German movies such as Faust and The Cabinet Of Doctor Caligari as well as French artist Gustave Doré while recalling the most recent works of Polish artist Zbigniew Bielak, Tribulation have embodied what an album is, according to them, “a true artform in itself.”

So when he’s asked to describe what the band were then trying to achieve with The Children Of The Night, it’s no wonder that Adam comes up with a striking cinematic reference: “Do you know both 1922’s Nosferatu and its weird 1979 remake by Werner Herzog? They’re beautiful yet so ghastly at the same time and that’s what we wanted our music to sound like.”

Taking the term ‘gothic’ back from its modern, soft-edged incarnation to its darkly romantic roots, the four frail individuals who comprise Tribulation bring forth a dandyish yet dusty edge to their stage presence, as if Pornography-era The Cure had decided to crank it up (incidentally, the deluxe edition of their new album includes a cover of One Hundred Years). In a world where macho poses and ‘tough guys’ are the norm, this embrace of their feminine side has caused quite a stir.

“We didn’t set out to be provocative,” states Adam. “We do have this kind of androgynous look onstage but it all comes down to paying attention to every detail. We’re really happy when, after a gig, somebody tells us we did a great show, not necessarily that we played a great concert. And besides, sex and death are two topics that go well together, aren’t they?”/o:p

For Adam, The Children Of The Night feels like the beginning of a whole new chapter. Like the vampire who still plays a central role in their concept, Tribulation love the idea of one’s form dying, only to be reborn again under another one. And when asked why to express this idea they hadn’t chosen the figure of the phoenix, Adam simply answers, “it’s because it’s too shiny, too bright. We relate much more to those enigmatic and dark characters, vampires. And besides, they look much cooler, don’t they?”

THE CHILDREN OF THE NIGHT IS OUT NOW VIA CENTURY MEDIA/o:p