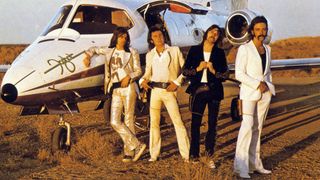 “Of course Slow Ride is about sex,” he says. “All rock’n’roll songs are about sex, aren’t they? It’s either ‘I’ve just done it’ or ‘I’m thinking about doing it’ or ‘Thank you for letting me do it.’ It was inspired by women. We were very popular back then. It was the middle of the 70s, the band was doing really well and we had more money than sense.”

Having relocated to the US East Coast, the British rockers’ blissful existence of rutting and royalties was interrupted in 1975 by the departure of burnt-out bassist Tony Stevens. “We were kind of like a three-wheeled Cadillac,” Earl recalls. “But our long-time producer, Nick Jameson, had played bass in his first band, so I said: ‘You want to join a band?’ We drove down to the house that I shared with [guitarist] Rod Price on Long Island, and Slow Ride came from a jam in the basement.

“We played for five or six hours that day,” he continues. “Dave is the only one who’s credited [as the song’s writer], because the rest of us didn’t really care about money at the time, but actually it was a bone of contention from time to time. Everybody wrote Slow Ride. If anybody should get something, Nick should, because he wrote the middle-eight and all the bass parts, and said: ‘Go bang at the start, Rog.’ He’s a talented bastard.

“The rhythm was a John Lee Hooker riff that we sort of straightened out. It wasn’t copied, it was inspired. You only get in trouble if you steal people’s melodies and words, as Led Zeppelin did. We all loved John Lee Hooker. Without people like him, Elmore James and Robert Johnson our repertoire would be pretty lean.”

This basic arrangement of Slow Ride was recorded first to cassette, and the band tapped the Bearsville record label for funds to perfect it. “We decided we needed to take some time off and get serious,” Earl recalls. “So Nick and I rented a station wagon, threw in drums, guitars, amps and keyboards, and found this studio [Suntreader] in Sharon, Vermont, right on the top of a mountain in the middle of nowhere. We were up there for a month.

“We got halfway through recording Slow Ride when the power went out, as it often did up there, when the locals would drive into a power line or a bear ran into them. So we stopped until about three weeks later. When the power came back, we turned on the machines, I sat down in the drum room and got the tempo and Nick punched me in. We had a three-week break before finishing the song. It’s great to play live, but the studio version is my favourite because there’s a few little odds and ends, like the old telephone dial tone you can hear in the middle.”

As it turned out, grizzly bears were a more benign obstacle than record label executives. “We mixed Slow Ride and Save Your Loving [the eventual B-side] and brought them back down to play for Paul Fishkin, who was the head of Bearsville Records,” says Earl. “He said: ‘I like ’em, but you can’t have an eight-minute single.’ Nick and I said: ‘Fuck off. Yes we can.’ He said: ‘But it’s a rock’n’roll song, people want ballads.’ And we said: ‘Fuck off. It’s gonna be the single.’ That was the only song that Foghat ever insisted was a single. So we won, but the trouble was the radio stations edited it down anyway.”

Released late in 1975, Slow Ride was a trajectory-changing event for the band, even if its US chart placing of No.20 (Foghat never made the UK chart) seemed counter- intuitive among the disco movement. “The disco years were the best years for Foghat,” Peverett told Goldmine in 1995. “It was almost like a counter-movement… the whole ‘disco sucks’ thing.”

“I still have a recollection of the first time I heard it,” Earls says. “We were down south in Louisiana somewhere, and I was out with one of the Warner Brothers promotion men. We were walking down the road and, oddly enough, there was a fish and chip store. As we walked in, Slow Ride was playing on the radio.”

With the proceeds from Slow Ride Earl bought himself a 1971 Lamborghini Miura SV. Life was good.

“It was terrific being well-known,” he says. “We weren’t like some bands, where you can’t go out and have dinner or get drunk and be stupid. Success with music is what we all strive for. Rod found it difficult with the fame and fortune. I didn’t, I loved it. It’s much better to be rich than to be poor. I’ve been both.”

Slow Ride is still remembered and known today, due in no small part to it getting a second wind from various uses in marketing. “Honda used it in a commercial, Guitar Hero brought in a whole new audience, various hamburger joints have used it,” says Earl. “And I don’t think Dave would’ve been all that happy about that, because he was a vegetarian.”

“Oddly enough, Slow Ride is as popular today as it was back then, probably more so. Even now, when there are 10,000 people out there screaming their heads off, it’s difficult not to get chills. I find that really gratifying, because it means that maybe the music we wrote back in the 70s actually means something and has stood the test of time. Hey, rock’n’roll is here to stay. Somebody else wrote that, didn’t they?”

The 70s Rock Quiz: how well do you know rock’s golden decade?