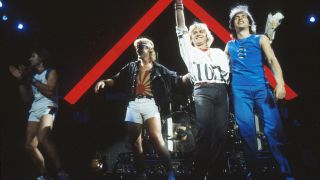 Given that they continue to perform the song three decades after it was born, Asia’s hopes of presenting Heat Of The Moment as a bold, contemporary statement are now perhaps mildly amusing. Producer Mike Stone had spent countless hours polishing its compact three minutes and 50 seconds into a shiny, pop-friendly anthem that they believed might break past connections with the lumpen extremities of progressive rock. Meanwhile, an expensive video presented the four band members in split-screen format, with a blow-dried John Wetton taking exceptional care to mention the year of the song’s release: ‘And now you find yourself in 82 / The disco hot spots hold no charm for you.’

Asia had been carefully pieced together around bass player/singer Wetton by John Kalodner, the Geffen Records exec who had a hunch that, despite past membership of groups like King Crimson, Roxy Music and UK, the full extent of Wetton’s writing talents remained untapped.

Yes were still 18 months away from a chart crossover with Owner Of A Lonely Heart, so it speaks volumes for his belief in Wetton’s game plan that somebody as perceptive as Kalodner would sanction the inclusion of two members of Yes – guitarist Steve Howe and keyboard maestro Geoffrey Downes [the latter having tasted pop stardom with The Buggles] – and Emerson, Lake & Palmer drummer Carl Palmer in Asia’s line-up.

“It was the early 1980s and Emerson, Lake & Palmer could not have carried on as we were,” Carl Palmer explains of his joining Asia. “We were not being played on the radio. America had gone very, very corporate. So it was a case of repainting the armour. Asia’s music was pop music, but with an edge.”

“Prog still lived deeply inside the four of us, but with Asia we sliced away the fat,” John Wetton says of the new group’s outlook. “We took our 12-minute songs and removed the 10 minutes of noodling around. The ingredients that we’d grown up with were kept, but we transposed them into a more succinct setting.” In fact, before being merged with an idea from Geoffrey Downes, Asia’s other leading writer, Wetton had composed the chorus of Heat Of The Moment in the style of a country and western ballad. “It was in 6/8 time and would have made a very good country song,” laughs Wetton now. “But, as happened so many times with that first Asia record, Geoff had a verse that dovetailed perfectly with my chorus, or vice versa.”

Downes now admits that his own segment was similar in meter to The Buggles’ Video Killed The Radio Star. “That’s frequently been pointed out to me,” he laughs, “but plagiarising yourself is okay. It wasn’t until we got into the studio that we thought of adding the power chord intro that makes the song so distinctive.”

Wetton is extremely proud of the lyrics, which begin with the line: ‘I never meant to be so bad to you/One thing I said that I would never do.’

“It’s the only song I’ve ever heard that begins with an apology,” he says. “It didn’t fare too badly for something thrown into the pot as a bit of an experiment right at the end of the session.”

However, he wasn’t seeking to make amends with one particular individual, more “an amalgamation of two or three people. That’s been a characteristic of my writing style. I’ve always written about several ex-girlfriends or enemies rolled into one.” The song’s final element, a complex middle-eight section, was born as the pair sat around the piano. “I still remember John Kalodner saying: ‘It would never have been a hit but for the guitar intro’, to which I replied: ‘But what about the chorus, the lyrics or the chord sequence? What about the unusual drumming?’.”

“I’m still amazed that the song never actually gathers momentum,” comments Carl Palmer. “It stops and starts and stops and starts, but it really connected with people. I wish that John and Geoff could write another one like it.” The one person who remained flatly unconvinced of the song’s merits was the man to whom it would fall to play said opening guitar motif. “Yes, once the song was written all we had to do was persuade Steve [Howe] to play it,” Wetton chuckles.

“In fairness to Steve,” adds Downes, with a thin smile of triumph, “it was a very, very un-Steve part. He definitely felt it was too poppy for his taste, and it was a bit of a struggle, but eventually he stepped up to the plate. And, of course, it became our biggest hit.”

Palmer’s recollection is that the band recorded Heat Of The Moment "at 2am, really late in the morning”, perhaps subconsciously attempting to undervalue its importance for the benefit of Howe. “It didn’t fare too badly for something thrown into the pot as a bit of an experiment right at the end of the session,” observes the drummer.

With the US still enraptured by MTV, the release of Asia’s self-titled debut in May 1982 could not have been more fortuitously timed. Asia topped the US chart for nine weeks. At its peak, 80,000 copies of the album were being bought every day. Heat Of The Moment reached No.4 in the US before the band had even played a gig.

“John and I were in the States and our song came onto the car radio,” Downes remembers. “We twizzled the dial and it was also being played on another station. It was crazy. And very exciting.”

For obvious reasons, Asia have never attempted to drop Heat Of The Moment from their live set.