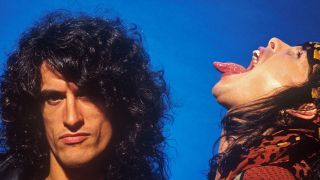 It may be easy to gloss over today thanks to their subsequent decades of superstardom, but go back to early 1987 and Aerosmith were staring down the barrel.

They had overcome the barren years in which they limped on without Joe Perry and Brad Whitford, but what should have been their triumphant return, 1985’s Done With Mirrors (on which Perry and Whitford reunited with Steven Tyler, Tom Hamilton and Joey Kramer) was poorly received – even by the band.

“Done With Mirrors was not exactly a resounding success as far as we were concerned,” Perry tells Classic Rock 30-plus years on from the album’s release. “Some people like that record and some people don’t. I don’t like it so much.”

But while Aerosmith’s eighth album flopped critically, it set them on the path to becoming the biggest rock band on the planet. Again. The tours that sandwiched the record’s release showed Tyler and Perry that they could still tour the world without tearing strips off each other, for starters. Their dissatisfaction with Done With Mirrors also taught them that they needed to rip up their own rule book when it came time to work up their next record. That was 1987’s Permanent Vacation, which resurrected Aerosmith’s career and sold by the boatload.

“When it came to Permanent Vacation we knew we needed to step it up,” Perry says. “MTV had come around by then, and videos were important and the whole thing had changed. We knew we needed to change and open up the way we did things. It was a new era. We put everything we had into that record and we didn’t stop working on those songs until we really nailed them. Fortunately it went down well and it was the start of a whole new era for us.”

The album’s success was given a big leg-up by second single Dude (Looks Like A Lady). The song itself is a bombastic slice of pop rock perfection that finds Aerosmith at their cartoonish best, underpinned by a hip-swinging horn section. As a song surprisingly inspired by early electronica and honed by outside songwriter Desmond Child, it encapsulated perfectly the band’s new anything-goes approach.

“Computers were starting to come in at that time,” Perry says of the track’s genesis. “Synthesisers were getting used more in music, and somebody brought in this sampler. It was very crude, early-days electronics. We sampled a guitar chord and messed around with it, and that started the basic rhythm for Dude. Then Steven got started writing lyrics.”

The old story goes that the song’s trademark lyrical line was switched from ‘Cruisin’ for a lady’ to ‘Dude looks like a lady’ after Tyler saw a pouting Vince Neil prowling the Sunset Strip. It’s a tale so fantastic that it must be apocryphal, right?

“There’s definitely some truth to that story,” Perry confirms, almost with a laugh. “I know that Steven saw Mötley Crüe and that lyric came into being afterwards. Steven used that as a jumping-off place. It wasn’t like they were the total inspiration for the song but it definitely moved the lyrics along. Put it this way: the lyrics would have been a lot different if he hadn’t seen Mötley Crüe looking that way.”

Even with smirks at the Strip’s most androgynous bunch of make-up-caked whisky swillers, Dude still lacked something lyrically. In 1987, for Aerosmith the thought of bringing in an outside songwriter was heresy, but Bon Jovi hitmaker Desmond Child was ushered in. You can’t argue with the results, but Perry admits that there were doubts.

“Steven had lyrics but they just weren’t quite right, they didn’t quite fit. Desmond came in and tweaked the lyrics a little bit with Steven. There was a lot of reluctance [to working with Child] at the start. But we knew that we had to change something up. We fought it all the way, but once we got to know Desmond it worked. That song was done except for literally just a couple of lines, and the changes just gave it a different vibe.”

With the lyrics finally nailed down, Slippery When Wet producer Bruce Fairbairn was brought in. It turned out to be a master stroke. With Fairbairn’s painstaking pre-production methods, they knew the song inside out before the red light went on.

The single hit the Top 20 in the US and gave the band their first UK Top 50 entry. It also clocked up hours of MTV airtime, thanks in part to its cheeky video which featured a red-hot band performance and plenty of bare female flesh. Today, Perry admits that the video stemmed from their new outlook of sharing the load.

“The first video we did for Draw The Line, we tried to direct it ourselves and it really wasn’t that good. So by Dude we thought: ‘Let’s find someone that does this for a living.’ So we called Marty Callner. Marty loved trying to push MTV’s buttons. He loved seeing how much he could get away with. That helped the videos like Dude do as well as they did and helped get all of the airplay. He’d go: ‘Wow! They let that through but we’re going to have to take this one out.’ He was a lot of fun to work with. That was when music videos were at their peak.”

And so it was mission accomplished. Dude (Looks Like A Lady) helped Permanent Vacation become a huge success, setting up the band for the monster smash album Pump that followed in 1989. And almost 30 years on, Dude continues to pass the ultimate test of time.

“As it turns out it’s one of those songs that did really well, ” Perry says. Everything on that record was definitely a step up from Done With Mirrors. But that particular song did well and people still love it today when we play live. It still makes the cut when we play live, and that says a lot.”

Number One hits? Dream on…

Dude (Looks Like A Lady) was the first time Aerosmith collaborated with outside songwriters, and it’s a method that has served them well since. It even delivered their biggest hit in 1998’s I Don’t Want To Miss A Thing, the signature tune for the Bruce Willis blockbuster Armageddon.

“As time has gone on we’ve used outside songwriters more and more,” says Perry. “Up to the point where we did that Diane Warren song which was our first number one single.”