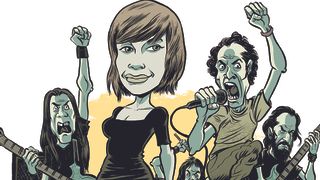 The way I support the DIY scene personally is simply by going to the shows.

I’ve lived in Brighton for few years now and I try and go to as many local shows put on by independent promoters as possible. The first thing you notice is how amazing a community there is at these gigs. We’ve been very lucky in Rolo Tomassi to play with lots of different types of bands over the years, but I have a couple of friends who are promoters in Brighton and if they are putting a show on, I am more likely to go down and see it, purely because even if you haven’t heard of the bands playing, I know there will be at least one band that I will love because I trust what those guys are doing. I trust the intentions that they have for putting on music. So, first and foremost, exploring your underground scene is one of the best chances you’ll get to discover music that you may never have heard before and fall in love with it.

While it would be a disservice to some of the great bands that exist totally within the DIY aesthetic to call Rolo Tomassi a DIY band – we have a booking agent and people that we work alongside these days to help us out – we actually put on the first shows we ever played ourselves. We put on shows in Sheffield when we first started out, because we were playing such unusual music. We didn’t really have much say in the situation, it was more about necessity. When you are doing something different then you have to make your own luck a little bit. It’s important that we took control of our careers, and that’s the most integral part of being a band in a DIY movement: feeling that you’ve taken back control. Because if you have a strong scene that exists outside of the network of bigger venues then those venues are less important.

I’m lucky that I live in an area of the country that does have a community of bands that can play smaller, more affordable and less corporate venues and fill them up. It makes for a better show, a better atmosphere and is more likely to inspire other people to form bands, rather than just being pushed into the local Academy-sized venue with all of the more mainstream trappings that go with it. We do play those venues ourselves, but we actually insist that when we go out on tour we have a main support with us and then ask the promoter to find a good local band to open the show up, potentially giving the opportunity to bands that we may never have listened to from those cities. So we actively try to keep away from the politics, rules and budgetary issues of those venues, because it’s becoming a problem for newer bands.

Finally, the joy for me is about finding that hidden gem that was right under your nose. I’m always on the lookout for new music, and finding bands that we could potentially tour with. There are fantastic bands up and down the UK, and, if you’re a real fan of music, you want to find them. You could fall in love with a band that haven’t even released anything yet, and that’s really exciting. It ignites a passion in discovering more and more music, and who knows where these bands will end up?

When I was 14 I went to see Bring Me The Horizon in Leeds in a 60-capacity venue, and Enter Shikari were supporting them. I’d never heard Enter Shikari before, and you think where both of those bands are now, and the type of venues that they can play, and then imagine just 60 people going crazy for them in this little room. So, not only do you get the excitement from first discovering them, you also get it magnified when you see just how well they end up doing further down the line. I have a lot more respect for bands when you see just where they’ve been and where they arrive. It’s very gratifying.

Rolo Tomassi tour the UK in April. Grievances is out now via Holy Roar