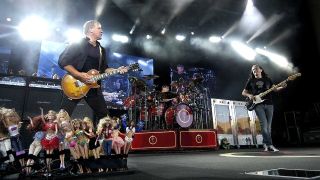 On August 14, 1974, the final piece of the Rush jigsaw fell into place. In front of 11,000 Manfred Mann's Earth Band fans at the Civic Arena in Pittsburgh, drummer Neil Peart stepped behind the band's kit for the first time, bringing with him the kind of technical brilliance the band's performances would become synonymous with.

Over the next four decades, until Rush's final live show at the Forum in Los Angeles, the trio of Peart, Geddy Lee and Alex Lifeson would perform thousands of shows, and release a number of live albums.

From 1976's All The World's A Stage to 2015's R40 collection, Rush were a force onstage, a bewildering combination of ambition, skill, showmanship and humour. These are 15 of the band's best live performances.

Rush are the cover stars of the current issue of Classic Rock.

Rush really mixed up their set for their shows in support of 2012’s Clockwork Angels album. While the latter half of the set saw the trio joined by a string section, the first half of the show saw Rush wheel out some Power Windows magic. While they did occasionally dust off Grand Designs, it was hearing Middletown Dreams live for the first time in decades that was the real thrill.

When Geddy Lee, Alex Lifeson and Neil Peart headed out on the road to celebrate their 30th anniversary in 2005, they recognised that cramming 30 years of classics in to a single, albeit, lengthy set would be a tall order. The solution? A seven-minute medley of some of their best-loved early material. The R30 Overture kickstarted the set and featured Finding My Way, Bastille Day, Anthem, A Passage To Bangkok, Cygnus X1 and Hemispheres. Now that’s how you start a show.

Recorded in San Diego, California, as Rush toured in support of Hold Your Fire, this is perhaps the definitive version of Mission. Rush are on fire throughout, but the highlight is Alex Lifeson’s spell-binding guitar outro which was largely cut from the album version. Here, Lerxst lets loose and gives us 32 seconds of pure bliss.

This performance was first released on VHS back in 1986, and reappeared as a bonus CD on the Rush Replay box set in 2006. It’s a scintillating set, with the The Weapon introduced by Count Floyd, who urges the crowd to put on their 3D glasses to get the full experience. It’s a brilliant performance and features one of the greatest Alex Lifeson solos of all time.

Remarkably, Rush had never played Losing It live until what turned out to be the band’s final tour. Violinist Ben Mink – who played on the original Signals track – joined the band onstage and gave a spine-tingling and emotionally-charged performance.

This song from 1984's controversial Grace Under Pressure studio album remains in Rush's live repertoire to the present day, proving that it's still loved – even by those who believe that Rush overstepped the mark during their synthesiser years. Its futuristic strains are awash with keyboards, but Lifeson’s guitar still roars.

A track from Hammersmith 1978, and originally on the A Farewell To Kings album. Still firmly entrenched in Rush’s sci-fi years, it captures the band at their hard-rocking best, showcasing some of Peart's deepest lyrics to date (try ‘Scheming demons dressed in kingly guise/Beating down the multitude and scoffing at the wise’).

From the Rush In Rio triple set. A riff-heavy song from Rush's eponymous 1974 debut album, that studio version Working Man features original drummer (and Neil Peart’s predecessor) John Rutsey. It has become so popular that the street-cred Audioslave actually played an abbreviated version of it on the US leg of their 2003 tour.

Rush clearly had their tongues in their cheeks when recording this lengthy instrumental and subtitling it 'An Exercise Of Self-Indulgence'. But that didn't stop the closing track of the Hemispheres album from becoming a perennial live favourite. As well as giving Lifeson room to breathe, it made increased use of synthesiser, ushering in a new direction.

The opening number of the first live record. For many, the introduction of "Oh won't you please welcome home… Rush!", the typically fiddly riff and banshee-like wail of Geddy Lee was a first exposure to this enduring Canadian three-piece. Compared to future works, Bastille Day is deceptively simple, but among the very best concert openers of all time.

With its spiralling yet radio-friendly guitar motif, this deceptively chirpy track (‘All this machinery/Making modern music… It's really just a question of your honesty’) from 1980's Permanent Waves became Rush's biggest hit single in North America. As you'll gauge from the 60,000 roaring fans on this recording, it's also quite big in Brazil.

Who could forget this story of the forest brought to musical life, originally told on 1978's Hemispheres? Introduced by Lifeson's acoustic guitar intro Broon's Bane, we learn of the maples that ‘want more sunlight’ and the oaks that ‘ignore their pleas’. Switching to an electric rumble, what to do but keep the trees equal, ‘by hatchet, axe and saw’?

Subdivided into four parts, this mighty beast debuted on 1975's Fly By Night album. According to the sleeve, 'Snow Dog' was the nickname of Alex Lifeson, who used the song as a squalling guitar showcase; 'By-Tor' refers to bassist Geddy Lee. With silly monickers abounding, newly arrived drummer Neil Peart wisely kept his head down.

Brought out of the vaults a full decade after the show at which it was recorded took place, this version of the epic Xanadu (which first appeared on 1977's A Farewell To Kings) was performed in front of an excited audience at London's Hammersmith Odeon in February 1978, and is around minute longer than the studio take.

The big daddy of all Rush live tracks. Though sadly not played in its entirety (Part V, 'Oracle: The Dream was curiously overlooked), this version was recorded in the trio's home town of Toronto, Canada, and captures them with real fire in their bellies, not long after the release of the conceptual milestone album of the same name.