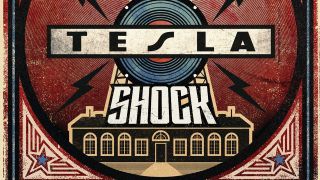 It’s been five years since Tesla released a new album, and guitarist Frank Hannon admits that the veteran hard rockers weren’t in any rush to get back into the studio. “Making records is really, really hard,” he says. “If we didn’t hook up with Phil Collen to produce us, I don’t know if we would have done a new record at all.”

Collen promoted himself for the producer’s job when Def Leppard and Tesla toured together in 2016. Once pre-production was underway, he became something of a sixth member of the band.

“Phil was part of the songwriting, and he was with us every step of the way,” Hannon explains. “He had a lot of excitement about what we were doing, and that got us excited about recording again. Shock is as much his as it is ours.”

Below, Hannon walks through Shock track-by-track.

You Won't Take Me Alive

“You need a killer track to open an album, and this song is killer. It sounds aggressive because it’s about aggression – not giving up the fight, no matter what that struggle is. In this business and world, you’ve got to fight all the time for what you want.

"That’s the whole message in the lyrics. Musically, this was an example of Phil Collen asking me if I had any riffs that had a good groove. I came up with something kind of Joe Perry-like. That’s always a good place to start."

“Phil had an idea for a fun rock‘n’roll song. I don’t quite know the meaning of it because I wasn’t involved in the writing. I think it’s about getting some action – at least that’s what I take from it.

"But I still sparked to the music. I did an awesome slide guitar solo and played some other cool parts on it. But I give all the credit for the riff to Phil and [guitarist] Dave Rude. It’s pretty much their song.”

We Can Rule The World

“I really like this one. [Bassist] Brian [Wheat] and Phil Collen set the lyrical tone to it. If I remember correctly, Phil had just lost a close family member, so I think that incident had a big influence on the song.

"Usually, I pick out guitar parts as my favourite bits, but I think the best part of the track is Brian’s piano arrangement. It’s just beautiful."

"It’s got some of the most meticulous production that we’ve ever had on a song, and that’s all because of Phil. He was a real coach throughout the record-making process, very positive and encouraging. He alleviated a lot of pressure for us, and he helped end a lot of arguments of debates."

Love Is A Fire

“Originally, I had it slated for a different album, but it never made it. I always liked it, so I didn’t want to let it go. The lyrics are about the work that goes into keeping love alive. You have to stoke a fire so that it doesn’t go out.

"Musically, I thought of it as more of a hard pop song, but Phil had the idea that it should be dreamy and strange. It was a compromise, but that’s OK. I think it’s beautiful."

“This is another song that I had written years ago, only now the lyrics are totally new. Phil suggested that the song should be about how music can be the soundtrack of your life.

"Certain tracks do that: For me, it’s Dream On by Aerosmith. That song takes me back to being in the park when I was in elementary school and seeing this girl from stepping into a pool. That’s what I thought about in this song, not so much that image but about how a piece of music can always stay with you."

“The acoustic guitar melody is very pretty. I woke up one morning and felt inspired, so I started strumming these melancholy, jazzy chords. They were a little out of the ordinary for me, but I showed the chord pattern to Phil, and he loved it.

"[Singer] Jeff [Keith] incorporated some of the lyrics from ‘Love Song’ off our second album. I thought that was a great idea – it was tongue in cheek and fun. You can’t take songwriting too seriously.”

“Dave had the guitar riff for this one. There’s no hidden meaning to the title – the mission is to keep rocking, keep pushing forward.

"To me, the song sounds like old-school Tesla, kind of like something we would have written back in the days when we did stuff like Song & Emotion. Not that we’re repeating ourselves. We’re very different people now, a lot more mature."

Tied To The Tracks

“Everybody has different influences in this band. Brian is into the Beatles, the other guys are into their own things, and I’m really into Lynyrd Skynyrd and the Allman Brothers. I guess you could say that I come from more of a bluesy rock’n’roll jamming kind of background.

"This track is probably the most ‘me’ on the record. The guitar riff is super cool. That’s me on the slide guitar. I love tracks like this – they’re kind of down and dirty."

“We experimented a lot on this song. I was playing a guitar with a B-bender. It kind of gives whatever you’re playing a wistful and melancholy feel; everything sounds a little sad and weird.

"The B-bender inspired the riff, but it also had an impact on the lyrics, which concerned the passing of a family member and keeping somebody’s spirit alive. That kind of theme was throughout a lot of the record."

“I wasn’t personally involved in this song, although I did play some guitar on it. I think the general concept speaks about the younger generation and how they're constantly searching for instant gratification.

"Not that we want to sound like old men or anything, because we were accused of the same shit. But we didn’t have cell phones and instant everything. Things just are what they are, you know?"

“This is another one that I wasn’t too involved in, but I do recall that Brian's bass riff started things in motion. Lyrically, it talks about how you have to step outside yourself if you want to go somewhere new. You can take that and apply it anywhere in your life, but for us as a band, we took that to heart when we made this record.

"I think that’s why it’s one of our best efforts yet. If you don’t take a chance, you’re just standing in place, and that’s not good for any band – or person."