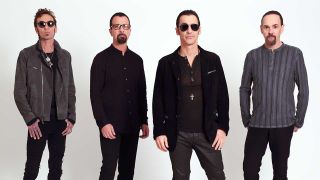 "We may even lose some people along the way," says Sully Erna. "But my theory was that is that if we lose one, we gain ten. Do the math."

The Godsmack frontman is in ebullient mood. His band's sixth album When Legends Rise is in the shops, and although it's a collection of songs that document a period of great personal upheaval, he's come out the other side and is full of fighting talk.

"I went out and started working with other writers," he says. "Just to see what their perception of what Godsmack could be in this day and age. It was really interesting to see if this approach would work with such a well-oiled machine, because we have an approach that already works.

"It happened somewhat painlessly. I really believe we found something unique on this record, not too far detached from what we do and what we've been, but just enough to raise the eyebrows of the core audience, and draw in a new audience and perhaps a younger audience."

"My biggest challenge sometimes isn't writing out the lyrics, or coming up with the melodies... it's finding out what the content is about and where I'm going, conceptually. In the end, it's a reflection of what I've been through in the last couple of years, where I've made a life decision to eliminate a lot of negative people and negative things in my life. I'm in a good place now, and I have some great things surrounding me. I have a great band. I have a beautiful daughter. I have a good career. My health is good the band's health is good.

"It's metaphorical, it's hopefully inspirational, and hopefully people won't look at it and think it's egotistical. Because I'm certainly not saying that we're the legends!"

"Awakening from a break-up made me open my eyes to a much bigger picture with the negative people around me who were there for the wrong reasons. That needed to be corrected, whether they were there for a paycheck or whether they were just there to constantly bleed you dry because of all their problems. You're always trying to help them and carry their crosses. It woke me up to a lot of things around me that I wasn't seeing clearly. It became one of the best decisions I've made in my life and really set me on this course."

"The last song written for the record. It was one of those songs where I think the universe kind of zapped me, because it was very quick. We built it and wrote it in one or two days and it was done. If you're a musician or songwriter you know what I mean, but sometimes you're just sitting there watching TV or reading a book and this gorgeous melody comes into your head, and you immediately have to pick up a guitar or it will go away fast.

"It was one of those moments where this really big riff came into my head, and I'm thinking, 'is this something we already do, or is this something new just knocking on my brain?' I worked it out, and the melodies and everything just came very quickly. What I love about this song is that it has this really great chorus (we used 20 elementary school kids to sing it). I love that dynamic. It's unique. It's a little bit different, but it's super catchy."

Every Part Of Me

"It's about the other side of the experiences I had been through, about regressing back to a time when you find someone who does make you happy. Sometimes the thing that has affected my relationships has been distance. You think back later, and wonder if you'd put in the time in and made enough of a commitment to make things work.

"Distance plays a big role in relationships when you're a musician, because everything you do when you're a musician is from the road, including – in my case – watching my daughter be raised. It's a song about reaching out to someone you think you're compatible with, but it might not work out because you're never physically able to be together."

Take It To The Edge

"This was written with the guy I got to produce the record, Eric Ron. He's got a great head for melody – and a really good songwriter – but more importantly he's a really good producer when it comes to sonically making the album sound good. That was one of the things I picked up when I demoed two songs. So I wanted to test the waters and go back and work with him a second time. It developed really quickly, and that's when I became convinced that this guy should produce the record with me."

"Probably the most important song on this record where comes to expanding, because it's the first time we've really put a legitimate ballad on a Godsmack record. It was the first time we introduced piano to the brand. It was taking a little bit of what I've done over the years with my solo stuff, and hybriding it to come up with a more classic ballad, like the Dream Ons and the Stairway To Heavens and the November Rains. I can't say it competes with those songs – obviously it's too new, and those songs are legendary – but I feel like it kind of has those elements of an epic ballad.

"It starts off very slow and keeps on growing and growing and growing into this big epic finale, and it has some of the deepest lyrics on the record. I think the biggest craving a human being needs to satisfy is the need to be loved, and as corny as that sounds we all carry these scars. What's important is that the connection is strong, and as long as you understand that you're willing to live with these scars, then you don't have to run away when something scares you."

"It's the acknowledgement that there is light at the end of the tunnel, that there will be a better life ahead. And whether you understand my decisions or not is not as relevant as me understanding why I've made these decisions, and knowing that it's for a bigger and better picture."

"This was co-written with Clint Lowery from Sevendust. He presented the music to me, and we worked on the arrangement together. The song has a little bit of an ego to it, in that it made be realised that it's not always the other person that creates the situations that I find myself becoming a victim of.

I see my own habits sometimes – and the things I do to pull people in – and then my attitude changes and I kind of push them away, just when they become loving and caring and attentive. It's this game of push and pull. So it's about the bullshit that I need to stop and correct. It's a great piece, and I love singing the chorus of the song. It's got a great big aggressive edge to it."

"This one's a little cocky too. But it comes from a place of satisfaction and completion. When you come to a point in your life where you know you're going to have to eliminate some people – some of the dearest friends for more than a quarter of a century, some of them being family members – it's a tough decision to make. You almost have to go into it fearlessly once you know that it's the right thing to do.

"It's about me getting to that place where I had to make myself OK with it, and almost get mad at the other side to a certain degree, to poke my chest out little bit. Because I'm going to be fine, and maybe more successful than I've ever been. Even though my name might be taboo in your home right now – because maybe you feel like I fucked this up – maybe one day you'll say my name again. Of course I care what you think, but I will not tolerate the excuses anymore. People have to accept responsibility for their actions."

"Honestly not my favourite song on the record. It's the weakest song on the record for me. I don't love it anymore, but I don't care. It's my fucking record, and hey, listen: if you like 10 out of 11 I win! It's a cool song. It's slinky, it crawls up on you, it's got a really cool chorus, it has more of a Nirvana thing, and for that I love it. It's about having a voice, and standing up for yourself, and not beating yourself up and not sticking to your true instincts. It's about beating your chest and knowing it's OK to vent these emotions, and be confident about the decisions you make."

Eye Of The Storm

"Certainly in the top three favourites on this record, maybe even the top two. Co-written again – musically – with Clint Lowery. He come up with the opening riff, which is probably my favourite riff on the record. I tore the song apart and rebuilt it maybe five times before I found the body of music the worked around that riff.

"I love the song. I love the groove. It's so pretty and strong. I think the chorus blows up into a big beautiful melodic chorus, and I love the lyrical content because I felt it was the most artistic and creative lyrics I came up with on the record.

"The theme that runs through this record is about rebirth, about acknowledging and being aware of your surroundings and making a change yourself. This song is about standing in the eye of the storm. It's about understand that sometimes you help create this. You're the one that wants to help. You're the ones who thinks they can fix everyone's problems.

"You put yourself in those situations and then you wonder why later it becomes a bit too much, like I'm standing in the middle of the shit that's spinning around me and I have to make a stand: I have to stand make a decision, and embrace whatever the consequences are. I really love that song."

When Legends Rise is out now.