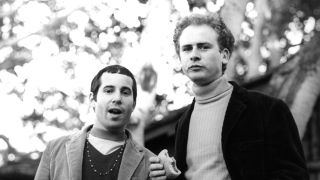 Spring 1969: Bobby Kennedy and Martin Luther King were gone – assassinated. Racial tensions were erupting across the US. The war

What was a sensitive singer-songwriter like Paul Simon to do but dig deep for some words of solace? As he gazed out across the East River from the window of his New York apartment, he sang the opening lines he’d had for over a week. ‘When you’re weary/Feeling small/When tears are in your eyes/I will dry them all.’ He especially liked how the melody to the second couplet echoed one of his favourite Bach chorales.

After that promising start, however, there was only the sound of silence.

“I was stuck for a while,” Simon admits. “Everywhere I went led to somewhere I didn’t want to be.”

What ultimately inspired him to finish his “humble little gospel song” was an album by southern gospel group the Swan Silvertones: “Every time I came home, I put that record on, so it was in my mind. I started to go to gospel chord changes, and took the melody further. Then there was one song where the lead singer was scatting, and he shouted out: ‘I’ll be your bridge over deep water/If you trust in my name.’ And, well, I guess I stole it.” Simon couldn’t wait to play his new song for Art Garfunkel. With its sweeping melody and sustained high notes, it would be perfect for his partner’s choirboy-pure voice. Or so he thought.

“He didn’t want to sing it,” Simon told Rolling Stone in 1973. “He couldn’t hear it for himself. He felt I should have done it. And many times I’m sorry I didn’t do it.”

Today Garfunkel remembers it differently: “When Paul showed me Bridge Over Troubled Water, he did say it was for me. And I loved the song immediately. My way of saying thank you was: ‘Are you sure? Because you sound lovely singing it, and it’s almost like you could do it…’

“Now, the famous story is that he took offence and that became a thorn between us, as if I was rejecting the song. That’s nonsense. I don’t remember him having a hard time with my grace. He said: ‘No, I wrote it for you.’ I said: ‘Thank you, man,’ and got into singing it.”

Within a week the duo were in CBS Studios in Hollywood, huddled around a piano with session ace Larry Knechtel, chiselling out the finer points of the arrangement. But it soon became apparent that Simon’s two-verse song wasn’t quite finished.

“It was supposed to end with the second verse,” Garfunkel recalls, “but there seemed to be a promise of what could be if Paul were to extend the song: the whole production could open up, and we could make a record with real size.

“We modelled it after the Righteous Brothers’ Ol’ Man River, where Phil Spector holds back his production until the last line. What a neat thing, to save it, save it, save it, then give ’em the kitchen sink.” Simon wrote a third verse (“You could clearly see it was written afterwards,” he says), making room for a kitchen sink that included two bass parts, vibraphone, a string arrangement (“A bit stock, but it does the job,” Garfunkel says), and a thundering beat, courtesy of Wrecking Crew drummer Hal Blaine.

Blaine recalls: “The image I got when I heard the song was a black man in a chain gang. So I went out to my car, got my chains from my snow tyres, and overdubbed the ending section. I was on my knees in front of the snare, pulling the tyre chains across the head, and slapping them down on two and four. It created a cool after-beat.”

With the instrumental track done, Garfunkel spent a week perfecting his vocal. “The last verse I nailed because of the thrill of pole-vaulting over the high notes. Getting the middle verse was pretty easy too. But the first verse, in its delicacy, was the Devil’s business. That took a lot of sessions.”

Two weeks in the making, Bridge… was a dynamic tour de force, swelling from a cathedral hush to a deeply moving finale that left all who heard it teary-eyed. It was also five minutes long, which guaranteed no radio play. But Columbia Records head honcho Clive Davis declared: “It’s the first single, first track and title of the album.”

The duo’s biggest hit, Bridge Over Troubled Water spent six weeks at No.1 in the US (three weeks in the UK). It swept the Grammys in 1971. claiming six awards including Song Of The Year and Record Of The Year. The song has been translated into many languages, it’s been covered by hundreds of artists, including Johnny Cash, Annie Lennox and Bonnie Tyler.

Ironically, this song of fellowship contributed to Simon And Garfunkel’s break-up in 1971. As Simon said: “Many times on stage, when I’d be sitting off to the side… and Artie would be singing it, people would stomp and cheer when it was over, and I would think: ‘That’s my song, man. Thank you very much. I wrote that.’ In the earlier days, when things were smoother, I never would have thought that, but towards the end when things were strained, I did.”

Garfunkel says: “We’re strong in our musical opinions, and we’ve had lots of differences, but we’ve remained pretty damned gentlemanly all the way.”

“I’ve sung it 6,400 times,” he adds. “And every time, I get a little visitation of the power of a great song. To say: ‘Whoever you are, if you need some solace, I will try to be a moment of sweetness for you,’ this kills me. To be the lucky one to express that, it moves me every damned time.”