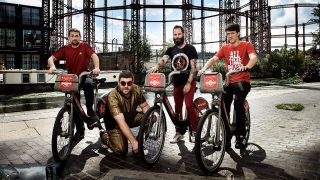 The video for Lionize’s new track Blindness To Danger features frontman Nate Bergman being mercilessly destroyed by a professional wrestler. It’s just the kind of daring you’d expect from a man who performs in head-to-toe gold.

“It’s a metaphor for clawing your way to the top,” Bergman tells us, “and it’s not always about winning the fight, but living it the next day.”

There’s certainly a lot of fight in this Maryland four-piece, and it was displayed in their recent London show. An almighty blast of fiery grooves, Deep Purple-infused organ and Bergman’s soul-charged vocals (informed by the likes of Sam Cooke, OV Wright and Joe Cocker), their live set has won over a lot of naysayers and finds the band on tremendous form.

Where their previous albums have surfed fantastical worlds (drawing lyrically from the likes of Philip K Dick and Star Wars), their sixth is more centred on current events. Not that they’ve lost their sense of the science-fictional.

“We’ve arrived at this dystopian world that we were fantasising about for years,” Bergman reasons. “Donald Trump is president. We’re here, it’s now. This is Back To The Future. These are really emotionally raw stories that we’re telling about ourselves experiencing this stuff, but through the scope of a sci-fi world.”

As a freshman in high school, Bergman was listening to bands such as Clutch, Led Zeppelin and ZZ Top. Soon after a friend played him a tape of go-go music – a DC-born hybrid of funk, Latin and hip-hop –he went to an all-ages go-go show at a nearby school.

“I’ll never forget seeing the rickety stage, where a high-school marching band might perform,” he remembers, “and these guys from inner-city DC playing to what was seemingly a predominantly African-American crowd. I was mesmerised, thinking: ‘This is cooler than punk rock’, because no one was trying to hurt me. It was this real organic natural energy.”

‘Reggae-rock’ is part of their story…

A similarly natural energy was integral to Lionize when they formed in 2004, having collectively ingested go-go, classic rock, reggae, punk and blues. Over the years their reggae credentials especially grew strong; they’ve toured with Steel Pulse and Bad Brains, and recorded in the Bob Marley-famed Harry J Studios in Jamaica. At one point they were the backing band for reggae/dub legend Lee Scratch Perry.

…but not the whole story

Ultimately, however, Lionize are far less niche than their history might suggest – and they hope that Nuclear Soul, with its bigger, broader rock scope, will change things.

“Labels are good in one sense, but if you don’t like reggae, that automatically discounts us,” Bergman says. “And we’re so much more than that, we’re constantly evolving. At this point we’ve said what we want to say with reggae. It’ll come back, maybe, but right now we’re really exciting about moving forward.”

They’re not afraid to think big.

Having premiered Nuclear Soul on tour with their friends Clutch last year, the band have seen that the new material thrives in huge venues, as well as the more intimate ones.

“The priority is writing great songs. But our band is very interested in success, in terms of reaching as many people as possible. I don’t think there’s a doubt in my mind that we want to be one of the biggest bands in the UK, in America. Any band that tells you they don’t think about broader success is lying.”

They sound tough, but they wouldn’t trash a dressing room.

“We kick down the door with a smile,” grins Bergman. “We’ve been through the shittiest parts of a band’s career; we’ve been dropped from labels, we’ve have tours fall out from under us, we’ve been in the middle of nowhere, Wyoming with a hundred and forty dollars in our account; we’ve slept in vans, on floors, outside, under the van… We realise what it’s like to be treated like shit. It wouldn’t feel right if we showed up two hours late and trashed the dressing room. At the end of the day we’re musicians, we get to travel and play music, and that’s a privilege.”

Nuclear Soul is released on September 8 via The End Records.

How do Lionize feel about making their Bloodstock debut?