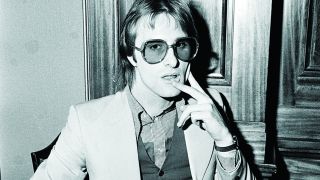 Now 64 years old, Steve Harley co-founded Cockney Rebel in London in 1972 when he was 21. After the original line-up ran aground two years later, the singer took control of the band until a split in ’77. A Harley-led version has existed since 1988, and next month he and the band’s original drummer Stuart Elliott reunite for a lengthy UK tour with two former members – guitarist Jim Cregan and keyboard player Duncan Mackay – to celebrate the 40th anniversary of the album they made together, The Best Years Of Our Lives.

You recently said your new single, Ordinary People, is “a potential Radio 2 playlister… if only”. That doesn’t sound very confident.

The new single from Cliff [Richard] is on the A-list, and they play David Gilmour, but it’s tough. I’d love it if Radio 2 played my single – half the world and its grandmother thinks I only wrote one song [laughs]. If it had the right name stuck to it I think they would play it.

What’s the song about?

It’s a cri de coeur – I’m speaking for the little man, as it were. It’s not John Lennon, but as I get older I’m not ashamed to wear my heart on my sleeve.

Will you be making a new album?

Yeah. Not too many people are holding their breath waiting for it, but I’ve got four other tracks, and lots of lyrics. At the end of the day, what am I if not a writer? It’s what I am.

Rod Stewart certainly approves of your compositional skills, having reworked A Friend For Life, a song you wrote with Jim Cregan, for his new album Another Country.

Was I happy with that? Just a bit! Rod really nails it in his old soul voice. Good old Rod.

On this tour you’re revisiting The Best Years Of Our Lives by performing the album in its entirety in its 40th anniversary year.

Plus all of the B-sides, yeah. Our singles always had original tracks.

That album was recorded at a troubled time, after all of the band except drummer Stuart Elliott quit. How does it feel, looking back?

Well, Cregan’s mad [laughs]. What can I say? C’mon, it was the seventies and all of us were single. They were hedonistic times: cognac and drugs, up all night smoking. But that’s not me any more. I’ve got to sing the following day.

Could any of the deeper tracks on the album potentially cause problems?

Yeah, maybe so. Christ, some of that album is plain crackers; 49th Parallel and Back To The Farm, with those time signatures. That album dates back to a time when my head was still swimming with crazy ideas. Luckily Alan Parsons [co-producer] was a genius and he didn’t try to rein me in.

How did the current reunion come about?

Nine months ago I wrote Jim, Duncan and Stuart an email, very informally, reminding them about the 40th anniversary and sounding out their interest. And everybody replied: “Damn straight.”

The audiences hand-picked the remainder of the set. Did any of their choices surprise you?

No, not at all – and there was only a few hundred that participated. We’re not The Osmonds. We’re not even Robbie Williams, know what I mean?

Our fans are, without being disrespectful, of an age. Some of them ‘do’ the internet. On this tour we’re going to play to around twenty thousand people, and maybe five hundred of them would ever dream of writing to my website. They’ll read it, but unless they’re children of my original fans – and there are few of those – they’re not twenty-five any more.

Where’s the weirdest public place you’ve heard Make Me Smile (Come Up And See Me)?

Dorothy [Harley’s wife] and I were in a taxi in Rome – and the song wasn’t a huge hit in Italy – and it came on the radio. The driver was thumping away at the steering wheel. And as we got out, I thought: “If only I could tell you [that was my song],” but it would have been pointless.

It’s a bitter song directed at bandmates that you felt had deserted you, isn’t it?

Yeah, it’s a bit of a finger-pointer. When those three guys [Jean-Paul Crocker, Milton Reame-James and Paul Jeffreys] walked out on me two weeks before I was going to be second beneath the headliner at the Reading Festival… What they did was crazy. We were on the verge of something very big.

Cockney Rebel have existed on and off for forty-three years. If you could go back in time, what would you change?

Oh gosh, I’m a bit too much of a fatalist. Life’s been good to me. It might sound trivial, but I wish I hadn’t sold one of my hand-built Zemaitis guitars to a Hollywood actor. They’re very rare, because Tony Zemaitis, who made them, is now dead. I’ve still got two, but in the eighties I sold the third and I wish I still had it.

With hindsight, were you a little too big for your boots during Cockney Rebel’s heyday?

Yeah, I probably was. I used to bridle when the NME beat me up, which was often.

In mitigation, some of those reviews were very personal in their criticism, but you did develop a reputation as a bit of a motormouth.

Did I? Motormouth? That’s not fair. Chrissie Hynde and Bob Geldof say they were journalists, and they wrote some reviews, but I was a qualified one. I had covered stories about the Krays in Whitechapel and as a young reporter I put myself in some unsavoury situations. Maybe that’s why some of those insecure writers had such a problem with me: I’d done things they hadn’t, and to top it all I’d gone on to become a successful musician. That won’t look too good in print – I don’t want to sound like a braggart.

As a former journalist, is there an autobiography in you?

I suppose so. But to be honest, it sounds like a lot of hard work for very little return. I don’t want my wife and kids reading much about what happened in the seventies. And despite what you just said, I’m not a motormouth at all. I’m really quite modest. [Much laughter] Oh God, I cannot believe I just said that!

You’re now sixty-four years of age. How feasible is it for Cockney Rebel to reach the next significant milestone, the big five-0, in seven years’ time?

Oh, just waking up for another day and still having a voice is enough. I take things as they come. I’m not madly ambitious – writing, playing and singing is all I’m about. Don’t ask about retirement – there’s no such thing.