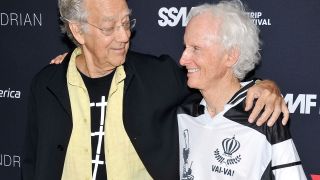 It’s been more than 35 years since Jim Morrison casually announced: “I’m off to Paris,” leaving his stunned bandmates – guitarist Robby Krieger, drummer John Densmore and keyboard player Ray Manzarek – to finish off the recording of The Doors’ sixth studio album, L.A. Woman, without their charismatic singer.

It seemed like a good idea. It seemed like the right time. The opportunity came around when Harley Davidson called Robby and asked us to play for their 100th anniversary. I said: “Sounds good to me. Let’s do it, and let’s get Ian.” All three of us had played together on a VH1 special called Storytellers.

What was it about Ian?

In your book Light My Fire you express some guilt over Morrison’s death. Do you think you could have prevented it?

Now, looking back on it, no. I would have done everything, had I known he was going to Paris to die. I wouldn’t have let him go, but I don’t know how I could have stopped him. I didn’t know anything at the time about alcoholism. I didn’t think Jim Morrison would go from being a psychedelic acid head to an alcoholic, but that was the path he took.

Do you think he went to Paris to die?

No, not premeditated. It was the end of the line. The end of the era. Psychically he was being drawn into the madness that Paris swirls around itself. Certainly in that early-70s era there were far too many bad intoxicating drugs going around in Paris.

As a poet, do you think it played into some sort of romantic notion of his to go to Paris and die?

Well, for him to go to Paris, yes, of course. Absolutely. That’s what I thought was so great about him going to Paris, and he was going to write his poetry and rejuvenate himself. He was going to be the next generation of Hemingway, F. Scott Fitzgerald, Henry Miller: Americans in Paris. I thought, that’s perfect, get away from rock’n’roll, get away from the groupies, get away from the sycophants, get away from those so-called ‘friends’ of his who would just hang out with him at the bar. He had succumbed to fame, because fame allows you to be indulged. And Jim, being the wild man, the madman, went for everything that was proffered to him [laughs]. Grace Slick tells the story about Jim and her and Paul Kantner [Jefferson Airplane] in Amsterdam when we played together, and people were just handing them drugs. Grace puts the drugs in her pocket and says: “I’ll save these for a later day”; Jim consumed them all. It was impossible for Jim Morrison to say no.

Jim Morrison’s death has always been shrouded in mystery. Do you still have any doubts that he’s buried at Père Lachaise cemetery?

None. I never did.

**In your book, you mention the casket being sealed before the band’s roadie, Bill Siddons, had a chance to view the body. **

What a mistake that guy made, huh? I mean, the idea that a sealed coffin was buried in Père Lachaise was obviously going to give flame to an insane rumour that Jim Morrison was still alive. And that’s exactly what happened. Of course, wouldn’t it be wonderful if he was alive? Wouldn’t it be wonderful if he was in fact out in the Seychelles and had found a little brown-skinned girl and had married her and had a couple of kids and was living the life of a recluse on the beach in the Seychelles? That’s my wish for Jim Morrison.

How big a part did drugs play in The Doors?

Drugs played a huge part in the individuals in The Doors, not in The Doors themselves. We hardly ever played on drugs. A hit of grass and a beer, maybe a shot of whiskey, and you’re flying.

Following Morrison’s death you considered bringing in another singer. I understand Paul McCartney was one of the names mentioned?

Yes. Paul was going to play bass. That would have worked out great. Who knows what direction we would have gone off into had that actually happened.

Yes. That would have been great.

Why do you think Densmore filed a lawsuit preventing you and the re-formed band from using the name The Doors?

What do you think they are?

I’m not going to tell you. There’ll be more trouble. I’m in enough trouble with that guy.

What was it about Oliver Stone’s movie The Doors that you hated so vehemently?

The portrayal of Morrison. I think he really did a disservice to Morrison. There were a couple of things he got right: he got the name of the band, and the music was terrific. I really liked the songs those guys have. But he didn’t get Morrison’s wit, his humour. Morrison was very intelligent, very well-read, very witty, very charming; he was not this kind of bizzaro person.

What do you imagine Jim would think of the re-formed Doors?

He’d love it. That’s the irony. He’d love it because he’s a poet, and a poet would say: “Read my words aloud.” There’s nothing a poet likes better than having someone speak those words out to an audience.

In 2002 – much to most rock fans’ surprise – original members Ray Manzarek and guitarist Robby Krieger reunited and re-formed The Doors, using the name The Doors Of The 21st Century, with bassist Angelo Barbera (from Krieger’s band), ex-Cult singer Ian Astbury and ex- Police drummer Stewart Copeland.

When Copeland broke his arm and was replaced by Ty Dennis (also from Krieger’s band), the lawsuits flew in both directions.

After legal action by original drummer John Densmore, in 2005 the group were prevented from using the name The Doors Of The 21st Century. They initially switched to D21C, then to Riders On The Storm (the name of a Doors song – and, confusingly, of a Doors tribute band in the US).