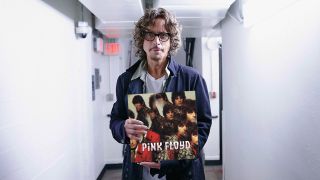 Soundgarden’s original bassist Hiro Yamamoto and I used to room together. One day I looked through the record collection of the guy that owned the house. I was already aware of Pink Floyd but I’d never seen The Piper At The Gates Of Dawn before. The artwork was so unusual.

I put it on and it sounded a little like they usually did – they made sombre music; the kind of records that people who smoked too much pot listened to – but this was different. It could almost have been a British indie-rock record of the era – which would’ve been the mid-1980s.

It includes some of Pink Floyd’s best-known songs, including Astronomy Domine and Interstellar Overdrive, and every song is fantastic. It connects with me in a way that I just can’t describe, creating a very special environment that no other record can achieve. It’s more capable of removing you from wherever you are when you hear it than any other record I know.

I’m also a big fan of the band’s follow-up album, A Saucer Full Of Secrets, but for different reasons. Syd Barrett wrote just one song, Jugland Blues, for that one. But save for Roger Waters’ Take Up Thy Stethoscope and Walk and the instrumental Interstellar Overdrive, The Piper At The Gates Of Dawn was mostly attributable to Syd. I like both of those albums more than the ones Pink Floyd made without Syd, as an arena rock band. I guess I was too afraid of crowds.

Even as an adolescent, I remember when The Dark Side Of The Moon came out in 1973. In America, Pink Floyd were really pushed into your face back then. I knew all of its songs even though I didn’t own the record.

For me, the joy of Pink Floyd was going backwards and discovering what they did before. And the important thing about The Piper At The Gates Of Dawn was the music’s strange juxtaposition – sometimes whimsical and pastoral, but simultaneously desperate and sad. I don’t think I ever found another record which that type of dichotomy worked so well. With Syd Barrett, it never felt like an invention.

After discovering the album that day in Seattle, I’ve bought it several times. The original pressing had See Emily Play but the American one didn’t. One of the editions had this silhouette photograph of the band’s heads and arms on the sleeve. I ended up painting that onto the back of my motorcycle jacket. The image reminded me so well of how the record made me feel.

The real Syd Barrett – by the people who knew him