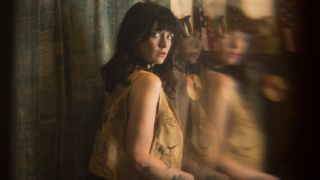 “All the stuff I love comes from rodeo queens,” says Nikki Lane. “It’s glamorous but it’s got humour in it.”

We’re sitting on the porch of Lane’s big, rambling red house in East Nashville, with her dogs, Clyde and Cash, nudging us for attention. One of Music City’s most captivating new artists, the 32-year-old singer is talking about her fashion sense, which rolls gabardine, fringe and sleek-fitted suits into a retro-glam kapow that’s a refreshing change from what Lane calls the “mall clothes” of many modern country artists. Serious about fashion, Lane even runs her own vintage western-wear shop, called High Class Hillbilly. “I like performers who have character, who are characters,” she says.

Lane’s look matches the sound of her latest album, Highway Queen. Powered by the singles Jackpot and 700,000 Rednecks, it’s a collection that is by turns rollicking and reflective, with echoes of the past meeting modern takes on love.

“I think of albums as making mix tapes,” she says. “I try to encompass everything that happens to me in the time period it takes to make the record. Music for me is a way to cope or shake something off. That’s what I hope I can give to people.”

Lane grew up in South Carolina, listening to everything from country to punk to Motown. In her early twenties she moved to Los Angeles to work at Fred Segal, a high-end jeans shop. “I was managing their denim bar, selling over a half a million dollars a year in denim,” she says. “It didn’t satiate the creative thing, but I learned how to market and sell.”

While stuck in the daily LA traffic, she started writing songs. That led her to New York, then Nashville. “When I realised I wanted to do this for a living, I had to come here,” she explains.

Her first two albums were manned – literally – by name producers: Dave Cobb and the Black Keys’ Dan Auerbach. “That was wonderful,” she says, “but the downside was that in most interviews it was always: ‘Wow, you worked with Dan Auerbach. What’s he like?’ Same with Dave. I started wondering: ‘Would my record be good if a famous rock star didn’t make it?’”

Still unsure of her abilities to self-produce, Lane made Highway Queen with Jonathan Wilson. Then scrapped it. “We started again, with me calling the shots. I just asked all the coolest people and best players I know to come in the studio. It’s my favourite of the three because the other albums don’t sound all the way like me.”

As she gears up for a spring tour, Lane is hoping for a return performance on weekly Nashville country concert the Grand Ole Opry. Of her first, in 2015, she says: “It was nerve-racking. But Little Jimmy Dickens watched my performance, and afterwards said: ‘You sing like a star, you dress like a star, you probably gonna be a star.’ I was like: ‘Oh, stop!’”

Highway Queen is out now via New West Records.

“I like the term ‘outlaw’,” Lane says, “because there are only about eleven words in the vocabulary describing anything close to what I do. Outlaw is more a state of mind than a sound.”