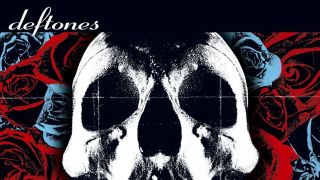 Nobody talks smack about Deftones. This comes with good reason as even people who don’t like the band (my wife and assorted other people who are mental) respect them for being a unique, free-spirit of a band whose creative boundaries have never known bounds and who have been able to ride out every trend for 20 years without really being part of any of them. Even in a cannon of some of the best albums put out by any band of any era, White Pony stands out. It is an album of such multi-layered brilliance that it has a sizeable claim to be the best album of the 21st century, if not all time. So how do you follow up an album that saw them headline arenas around the world and expand the musical horizons of a generation? With the most extreme and difficult yet rewarding album of their career.

Extreme is the word that comes to mind because this is an album that was created by a band that had become creatively disjointed while being at the peak of their powers. in 2002 Deftones were at loggerheads. Guitarist Steph Carpenter felt the need to play harder than ever after the more chilled vibes of White Pony and the natural feeling of being creatively threatened since Chino Moreno had begun writing guitar parts for the band. Moreno went the other way, embracing his voice as an instrument more than ever and drifting further into ambient soundscapes (He went on to do the first Team Sleep record straight after this album if you need the evidence.) There were fights with producers, and the awkwardness of a group of school friends recording the album while never being in the same room as one another.

As a listen, it’s volatile. It lures you in with the euphoric tones of Minerva, a song that includes a vocal from Chino Moreno that is so transcendent it’s enough to make you feel like you’re floating through time and space itself. Then there’s the wild, wide-eyed, totally unpredictable feel of When Girls Telephone Boys, a song that still stands out as one of the most unique and brilliant songs in the Deftones arsenal. Lucky You is all minimalist electronics and Chi Cheng’s fat and menacing bass with Moreno crooning out a vocal that has more in common with the seductive sensuality of Sade or Disintegration-era Robert Smith. Moana rode off-kilter rhythms while still being cohesive, focused and brilliant. Bloody Cape is one the heaviest singles the band have ever put out. You know all about Hexagram because every time you hear those opening chords, you’re ready to go on a journey that’s like taking in all of the facets of Deftones at once. The ability to maximise their heaviness by using it in controlled yet nihlistic bursts, Steph Carpenter’s switching up styles between math metal and a blanket of velvet, the effortless brilliance of beat master extrordinaire Abe Cunningham. It’s genius. Fuck people that overuse that word, this is the real thing.

This record captures the mindset of a band that have always followed their own path. Despite White Pony being the biggest critical and commercial success of their career, Deftones didn’t take the easy way out and ape the template of that triumph and risk upsetting the applecart. They set fire to the applecart and pissed on the ashes with the most difficult album they are likely to ever put their name on. It’s a headfuck to listen to, you’re flipped in every direction and spit out at the other end, but the joy in those impulses continue to give to this day. Viva one of the greatest bands of this or any generation.