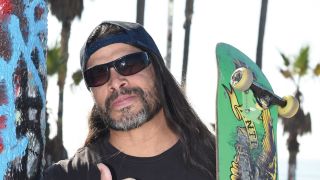 As Hammer finds out, that usually means grabbing his family, heading to the beach and tackling some half-pipes…

The freaks are emerging from the shadows and the show’s about to start. It’s barely 8am and the quixotic beach denizens have begun setting up for the day ahead. In only a couple of hours, a seething horde of tourists, street musicians, surfers and a jaw-dropping number of large men rollerskating in thongs will bombard this legendary strip of pavement known as the Venice Boardwalk.

Presently, it’s still relatively quiet, as the beach artists arrange cheap knick-knacks on folding tables beneath towering palm trees. Between the boardwalk and the ocean sits the fabled Venice Skate Park, where two dads lean against a railing and chat idly as their sons receive a skating lesson./o:p

You’d have to be specifically looking for him to notice that one of the two skate dads plays in the biggest metal band on the planet — it’s Metallica bassist Rob Trujillo, who has generously offered to meet us during some rare time off to show us around his old stomping ground. With a baseball cap pulled down and dark wraparounds shrouding his eyes, Rob blends in easily with our surroundings. As well he should – he’s as local as they get.

“I was born in Santa Monica,” he says, “and my dad lived about two blocks from where we are now, in Venice. When my parents separated, I was about five years old so I spent a chunk of time right here at the beach with my dad, which is how I was introduced to skateboarding.”

Much as one’s ancestral home is often linked to a football club or local monument, skateboarding is as much a part of Venice as the beach itself, particularly the rough-and- tumble area of North Venice known in the late-70s as ‘Dogtown’. It was here that a 13-year-old Rob Trujillo hopped on his first skateboard and, nearly three decades later, the passion still burns hot./o:p

“At a certain point, every kid on the west side usually embraced the surf/skate scene. I also used to boogie board here with my friends and some of those friends ended up becoming Dogtown skaters. It’s funny; I still see those guys around sometimes and we’re all older now; we have kids, we’re married and we have different gigs, but most of us are still connected to skating and surfing.”

Over on the other side of the park, we see Rob’s wife Chloe, his daughter Lula and their French bulldog, Riff, who we learn is the only Trujillo who doesn’t skate. Rob does admit, however, that he no longer skates as much as he used to. “I surf primarily now. In fact, I caught my first wave right over there, when I was 15,” he says, gesturing to the water. “I can’t afford to skate because if I hurt myself, I don’t have a job anymore. So I live vicariously through my son and his skating.”

By Rob’s estimate, his son Ty has already surpassed his own personal skateboarding heights, easily navigating deep drops into pool-sized concrete bowls or gliding along iron railings. Just then, Ty lands on his board just off-centre and crashes to the pavement. Rob quickly encourages him to get back up and try again. This time around, Ty nails it.

“We all have that fear,” Rob explains, “When you take a spill, you generally don’t want to do that manoeuvre again and I always say, ‘It’s OK to be afraid.’ You can apply that to anything in life. I have friends who are brilliant musicians and, believe it or not, I think they’re afraid of success. I think they’re afraid to leave their comfort zone, afraid to leave their bedroom. They’re just kind of content with being stoned at home and making incredible music that nobody will ever hear.”

Although Los Angeles will forever stand as the throne of glam metal, its history also boasts one of punk rock’s most incendiary chapters – West LA’s hardcore scene in the 80s, where the bellicose defiance of hardcore and riotous mentality of skate culture converged into a powerful movement in which Rob played a pivotal role.

“I was very fortunate that I played in a band where the core original followers were the skate community, and that was Suicidal Tendencies,” he recalls. “As a band, it seemed that all over the world – not just here in Los Angeles, but anywhere we went – there was this following of skateboarders who were really into the music and motivated by the music. It was almost like extreme sports enthusiasts were really driven by the sound of Suicidal Tendencies, and to a certain degree I think that even with Metallica. I’ve been fortunate that the different styles of music that I’ve chosen have attracted a strong contingent of extreme sports, whether pro, amateur, hobby, whatever, that have been motivated by the music.“

As we circle around the skate park, dodging the odd daredevil flying down stairs or dropping into one of the many bowls, it’s clear that many of the gathering number of skaters showing up know precisely who he his, but other than the odd dude who nods in passing, he’s left alone with his family.

We point out that in some corners, skateboarders are viewed with suspicion, if not overt revulsion, due to some of the perceived anti-social elements within that community.

“At least over here,” he says, “this is the only community where you get your sort of gangbanger cholos that are into the sport, your surfers, and you get a lot of different ethnic groups, ant that’s a really great thing about Venice Skate Park and a lot of the skate parks around LA.

“There’s a cultural diversity and I always find it amazing that you come here on the weekends and you see people rollerskating to retro music over here, you’ve got your skaters over here, the occasional brawl, you’ve got a contingent of homeless skaters and probably people who are realtors and lawyers who are still skating and they still understand the dynamic that goes with the sport. So it’s really a melting pot. Usually, on Saturdays, there’s a couple skaters who bring ghetto blasters and they pump old-school, straight-up punk rock, like Fear and Suicidal and old stuff like that. A lot of the early-80s LA punk bands. Then you hear some Sabbath too, so it’s really cool.” /o:p

They say there’s no rest for the wicked, and it seems the same holds true for skating heavy metal bassists. As Hammer chatted to Rob, 2015 was looking, and he will soon be charging hard with rehearsals, studio work and another international campaign that will bring Metallica back to the UK this summer at the Reading and Leeds festivals. Instead of devoting his free time to napping and surfing, Rob is busy preparing for the March release of a documentary he’s producing on the life of the legendary jazz bassist, Jaco Pastorius. As he explains, this is no knock-off music bio.

“The whole point is to share the story with the world because it’s a great human story,” he insists. “It’s not just about bass or jazz, per se, it’s beyond that. This person had a bipolar disorder, he was homeless, he did some incredible things in a short amount of time. But then, as happens to so many geniuses in the art world, things take over their lives and with him, there was alcohol and a chemical imbalance working against him, so it’s really an important story and I felt like I should be the one to try and get it to the world and get it to the fanbase.

“Unfortunately there are people who always discriminate against styles, saying, ‘Well, he plays for Metallica, he can’t tell this story!’” he continues. “To me that’s bullshit, because I saw the guy play four times. I’m 50 and I was able to see him play and these people didn’t see him play. It’s funny, because all of the older musicians that we’ve interviewed, like Wayne Shorter, who’s in [NYC jazz-fusion band] Weather Report and Bootsy Collins, they all have full respect for me and for what I’ve done as a musician, whether it’s been with Infectious Grooves or Suicidal Tendencies or even Metallica.

“But it doesn’t have to do with Rob Trujillo, the bass player, or ‘the bass player of Metallica’, it’s deeper than that. I’m just so happy to see the finish line right in front of me, and I mean that more in the sense that it feels right. It’s an accomplishment, and everybody that’s been involved has put a lot of passion in it.”

Just now Lula rolls over on a skateboard with Riff trotting happily in tow. She announces that it’s time to go. Her dad smiles and promises that they can get breakfast soon. We remark how easily he appears to balance so many spinning plates.

“Between working with Metallica and finishing the film project, it’s been kind of crazy but at this age, it’s all about balance,” he reflects. “The biggest problem is just time. When you have a family, you’ve got to balance your life and your responsibilities.”

Of his day job, Rob is unsurprisingly cagey, but is at least happy to report that Metallica are “primarily in the process of writing right now. We’ve got some shows coming up. We’ve got a big show for Rock In Rio in Las Vegas, we’re gonna have some dates in Europe in the summer. We’re primarily writing. We’ve got a bunch of great ideas that we’re working on right now.”

This year he’ll travel the globe again like a proper rock star, with the fans, the festivals and all the outrageous fortune that life affords. But each day at some point, his thoughts will drift to coming home to Venice, where he can resume his peaceful life as just another dad taking his kids to the skate park.

METALLICA PLAY READING AND LEEDS FESTIVALS IN AUGUST. A NEW ALBUM IS EXPECTED LATER THIS YEAR