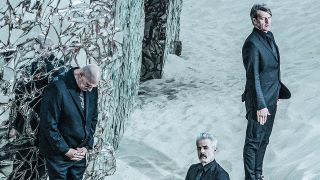 Imagine yourself at a rock festival and news circulates that the Foo Fighters won’t be playing tonight because Dave Grohl has taken a swan dive off the stage in Gothenburg. But not to worry, because their slot will filled by a bunch of greying Belgians called Triggerfinger. If that happened in the UK there would likely be a riot, or at least a flurry of requests for a refund. But it’s a measure of how loved Triggerfinger are in mainland Europe that just such a shuffle at Holland’s Pinkpop in 2015 was accepted, maybe even welcomed. “And it was a fantastic show, by the way,” Triggerfinger drummer Mario Goossens says with a grin.

Some bands are enormous, full stop. Others expand and contract, depending on the time zone. For example, it’s fair to say that the title of Triggerfinger’s fifth album, Colossus, is wholly fitting in Belgium or Holland, where notching up platinum sales (20,000 and 40,000 respectively) and playing 8,000-capacity venues are par for the course. Yet in Britain – despite a shop-window support at the Stones’ Hyde Park show in 2013 – they don’t mean much at all.

But then Triggerfinger never expected a lot. Goossens, frontman Ruben Block and bassist Paul Van Bruystegem set out in Antwerp circa 1998 with the modest ambition to simply “play music” of an alt.blues-rock persuasion that none of them seem keen to pin down today. Goossens throws out Howlin’ Wolf, Black Sabbath, Roxy Music, Nick Cave and, perhaps most pertinently, Queens Of The Stone Age. Block won’t give us a name. “It’s endless,” he says. “It ranges from folk to pop to rock, blues, soul, hip-hop, metal… you name it.”

And play music they did, in every grot-hole and ill-advised restaurant that would have them.

When they toured supporting symphonic metallers Within Temptation, the mismatch meant every night was a battle.

“We’d go on stage with our suits and people would be looking at us, like: ‘Who are these crazy old men?’ Because we’re all a bit grey,” Goossens says. “One gig in Norway, this girl had her middle finger up the whole time – ‘Fuck off!’ But I have to say, five minutes into the set they were all digging it. We went back two weeks later and she was there, same girl, stood in front of us, enjoying the whole set.”

“Luckily we’re in a band where we’re louder than the audience,” says Block. “We have enough amps, and we turn them up.”

A self-titled debut album in 2004 didn’t do much, and nor did 2008’s What Grabs Ya. But 2010’s All This Dancin’ Around achieved platinum sales, and two years later the fuse was lit by their cover of Lykke Li’s I Follow Rivers, which reached No.1 in six countries. That’s when the ‘pinch yourself’ moments began.

“When we supported the Stones,” says Goossens, “I remember seeing Keith Richards and Ronnie Wood, like, playing Pirates Of The Caribbean. They had these wooden swords, like, ‘Whoargh!’ Seventy years old and still kids, y’know?”

More surreal still was performing in the ring before the 2012 heavyweight boxing title fight between Wladimir Klitschko and Tony Thompson.

“After I Follow Rivers, Universal got us this gig playing for Klitschko when he came into the ring,” Goossens explains. “It was broadcast in a hundred and fifty countries or something.”

A combined 30 million streams of I Follow Rivers on Spotify and YouTube have played a part in helping Triggerfinger spread their wings.

“Tokyo was strange, in a wonderful way,” says Block. “It’s like you’re in a mad, twitching, flickering movie, and the fans hit it full-on. Some of them even had these little choreographies they were doing in front of the stage. They hadn’t seen us before – nobody had – but they were willing to dig in and join us. And our last big tour in Canada was amazing. We drove from Toronto to Vancouver and all the way back. That’s like driving from Antwerp to Afghanistan and back. Insane.”

All these things certainly opened doors, but it would be a shame if I Follow Rivers remained the only Triggerfinger track that most people know. There is far better on Colossus, from the fuzzy, stompy, Josh Homme-flavoured Upstairs Box to the creepy, Bowie-esque Afterglow.

As well as recording with producer Mitchell Froom and engineer Tchad Blake in Santa Monica and Wales, Block says the other key departure on this fifth album was relaxing the concept that every song had to be played live and simply following the muse.

“If you listen to Colossus, it’s really open,” he stresses. “We invited a lot of influences and vibes, and we didn’t limit ourselves. We said: ‘We have to make some cool shit. Let’s see what we can come up with. On Colossus, if we were thinking about hitting a kettle, we did.

“We actually ended up using a lot of demos on the final record. There are vocal takes that were done here in Belgium that sound a bit grainy, but the atmosphere was great and you could feel a real tension, so we used it.”

Could Colossus be the album that finally breaks Triggerfinger in the UK? With a new album that contains their strongest tunes to date, and the marketing muscle of their new label, Mascot, it’s certainly their best shot.

“There are downsides and upsides that we’re not as big in the UK,” explains Block. “I imagine for some bands it’s hard to go back to smaller clubs. But for us it’s a cool challenge to play for an audience that doesn’t know you, and win them over. It keeps you sharp.”

Colossus is out on August 25 via Mascot Label Group. Triggerfinger tour the UK in October