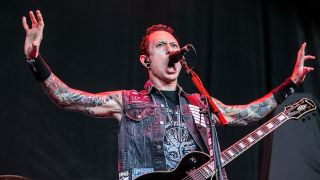 I will begin with saying that 2014 was an incredible year for new music. As you can see, my top 3 are all #1 – they are all tied for first place. It was quite difficult to not put 20-30 albums in this year’s top releases, it is also a feat to put things “in order”, but I shall attempt to!

Slipknot’s (sic) was the first song Trivium ever played live. We performed it in 2000 at The Lake Brantley High School’s Battle Of The Bands when I was 12⁄13 years old. Needless to say, Slipknot has been a favourite band of mine for ages. Having rotating favourites between the first and third albums, I had no idea what was to come of their fifth.

.5 for me, is the greatest Slipknot album yet. Override and Custer are my two new favourite Slipknot songs. The dimensions and depths and layers to this album are staggering. The brutality is as harsh as ever on the record, the melody is more passionate and infectious as ever. This album is the pinnacle of all things Slipknot. Mind-blowing.

The Satanist without question is the best in death metal, black metal, extreme metal, and metal of the year. Having always been a massive Behemoth fan, I feel with their newest opus, they have ventured into a darkness unlike anything previous. O Father O Satan O Sun! and The Satanist explore new tempos and territories uncharted before by Behemoth. These slower, more melodic, more menacing tracks are equally as heavy and destructive as anything they’ve done previously. The Satanist has so many layers and worlds within the music – it’s more like Mozart’s Requiem than simply black metal; although – this is the most black betal thing Behemoth has done yet – in the sense it’s revolutionised black metal all over again.

Outside of Japan, Maximum The Hormone isn’t quite a household name just yet. But to put it in perspective, I had the privilege to see MTH play in front of 20,000 people in Osaka a few years back and I easily put it in one of the greatest shows I’ve seen in my life. The entire crowd knew every word, hand motion; it was as if the crowd was part of the performance.

Yoshū captures everything I love about Maximum The Hormone. It’s melodic, spastic, heavy, insane, indescribable, bizarre, hilarious, passionate, manic, beautiful, serious… It’s all things Japan defined by a band. If I absolutely must compare MTH to bands or genres, think: Pantera, Faith No More, The Misfits, Rage Against The Machine, Black Flag and all the insanity that is Japanimation. Although… that still doesn’t quite define them.

Shelter can be simply described in one word: beautiful.

The evolution of this band is quite staggering when one looks back on the material previously (it was great in the past, but now – they’ve stumbled upon something truly unique). The melodies on Alcest’s new album feel optimistic and epic at the same time. Everything on this album feels genuine and emotive; the music moves as a film score underneath the narrative of the vocals. In allowing slower pacing and cleaner tones in the instruments, Alcest has delivered beauty in a genre starved for something revolutionary.

Soen’s first album delivers soaring vocal melodies painted over a progressive and technical backdrop of intricate musicality. The sombre tonality of the instruments blends perfectly with the passionate singing; truly a wonderful experience of an album.

Rodrigo Y Gabriela are the king and queen of the melding of classical Spanish-style guitar and metal. No, there is no distortion or screaming or even drums on this album; but it is metal nevertheless.

The technical proficiency of this duo can be heard in bursts of shred, in the deep note-laden chords, in the ability to transform one guitar into the driving percussion-force behind story-telling melodies that make you think of Paco Peña and Orion all at the same time. What these two can do with an acoustic guitar is fantastic.

The legends have returned. It has been far too long since the iconic, genre-defining album Slaughter Of The Soul, and now that they’re back – At The Gates are firing on all cylinders.

At The Gates picks up right where they left off, with their signature sound. ATG’s influence is ever-present in all contemporary metal bands, and it’s great to see the kings of the genre returning to reclaim their throne.

I’ve said it before, and I’ll say it again - without In Flames, Trivium wouldn’t exist. The Jester Race changed music for me, and when Reroute To Remain came out, In Flames changed music again for me.

What is so exciting about In Flames is that with every album, they can shift and develop and explore new sounds and realms. Siren Charms has flares of the classic In Flames, the newer generation, and something completely new. This new album is a look at past, present, and future In Flames all in one.

One of the many things I’ve always loved about Opeth is the way that their music makes me imagine storylines of forest-world, Tolkien-esque proportions. Another is their cunning and daring way of making the albums they want to make; that is a trait that ought to be respected.

Pale Communion takes the listener on a journey, it isn’t afraid to take its time, it isn’t afraid to shift and sway organically and melodically. This album has all the greatness of the stylistics of ‘60s and ‘70s prog, tinges and whispers of classical musical melody, and all that is Opeth.

**8. Winterfylleth – The Divination Of Antiquity **

Winterfylleth’s latest album showcases their unique blend of an old school black metal approach blended with their vivid, epic, melodious song-writing ability. Unafraid to venture into the mid-pace, and at times slower world of tempos in black metal, Winterfylleth have created their own place in the realm of the genre. Moments like the intro of A Careworn Heart really display the full scope of Winterfylleth’s ability to paint vivid imagery with their music, the return of the intro’s chanting vocals are fantastic.

Catch Trivium this August as they headline Bloodstock Festival!