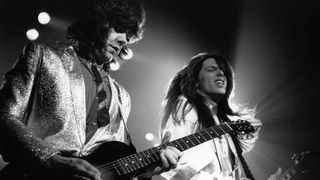 Though ‘Whispering’ Bob Harris was the second presenter to helm the Old Grey Whistle Test (taking over from Melody Maker’s Richard Williams in 1972), it was the softly-spoken broadcaster who came to help define the show’s then sometimes radical approach to booking guests for their shell of a studio. Quietly anarchic, though Bob’s occasional quizzical eyebrow was about as freaked out as the presenter ever got, the OGWT redefined music TV, its let-the-music-do-the -talking ethos still evident today in shows like the similarly ramshackle Later… With Jools Holand.

From the memorable harmonica theme, /Stone Fox Chase/, to the infamous, animated ‘Star Kicker’ man opening credits, it was anyone’s guess where that week’s episode would take you. Here then are six (four recorded under Bob Harris’ watchful eye) reasons why the Old Grey Whistle Tune rocked.

The opening track from his acclaimed Blueprint album, Gallagher and his band performs with the sort of electricity you think he’d reserve for a sold out theatre somewhere in Donegal. Charismatic and seemingly effortless in his playing, this a live Rory Gallagher jam worth reserving for the ages.

Though Harris might have looked out of step (and askance when this lot trooped into the studio, no doubt) when he referred to New York’s finest as ‘mock rock’, there’s no denying the impact the band’s debut performance on British TV had, giving a favourable knock on effect that helped kick start punk rock. And as for Johnny Thunders inimitable hair…

The OGWT was briefly transplanted to the Beeb’s Pebble Mill Studios in the Midlands for a night of music from the Black Country, not least this rare gem from Judas Priest’s debut album. American arenas, bullet belts and leather were a far off dream as Rob Halford swished about flicking the hair from his eyes and KK Downing dressed like he was just about to leave for the beach.

Another exclusive for the show with Heart debuting on UK TV with the title track from their first album. Sublime and understated with Nancy Wilson playing the OGWT game with a ‘Star Kicker’ logo badge affixed to her guitar strap. That said, while Ann offers a brief smile into the camera lens, Nancy gives it a look like she’s about punch the operator out.

A tour de force, a force of nature, call it what you like, but this live performance of the title track from Moore’s solo album was a stone cold kick to the head. Phil Lynott and Don Airey had both featured on the album, so it was no surprise to see them in the studio, but with Cozy Powell on drums and Scott Gorham racing Moore to the end of the song, this aural punch-up was destined to rattle TVs nationwide.

Though the band had featured on the show back in 1984 with a deft take on Resurrection Joe, by the time they returned three years later they were a different proposition entirely. For one, where had all those Marshall stacks come from and who was doing Billy Duffy’s hair now, Elvira? They were, you’ll excuse the pun, electrifying though. America and MTV may as well have surrendered there and then.