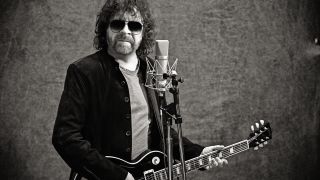 It’s September 2014 again. Please talk us through your thoughts before and after walking the gangway to the Hyde Park stage for ELO’s comeback… After twenty-eight years of not being up there I felt in a daze. I wondered: “Ooh ’eck – how many people will have stayed to watch us?” But there was fifty thousand and the welcome was so incredibly warm. And afterwards I was totally elated. I couldn’t believe the amount of love.

If you had feared the possibility of failure, why did you do the show?

I went on Chris Evans’s radio show, and off-mic he asked whether I would consider playing live again. I replied yeah… if enough people cared. I mean, I had disbanded ELO in 1986 for that very reason – nobody really did care any more. But when Chris put it to the listeners they replied in their thousands.

Fast-forward fifteen years from Zoom – an ELO album that flopped by the standards you were used to – and the tour includes four sold-out nights at the O2 Arena, plus equally popular regional shows. What does this teach you?

Well, that’s the thing – I wasn’t used to those standards [of my heyday] any more. And after such a long break I felt fresh again. My enthusiasm was back and I was really in the mood to do an ELO album. The moral is, I suppose, to never give up. Doing Hyde Park was risky, but I’m so glad that I agreed to it.

Did you feel in any way constrained working again within the ELO blueprint on the new album, Alone In The Universe, and doing it solo?

Not at all. And although I play every instrument on the album except the shaker and the tambourine, I’m not alone in the studio. But honestly, I don’t pay any attention to those expectations. I have to love it first. If others like what I’ve done, it really is a bonus. It’s not an audition.

You win the lottery and a fan poll demands the return of ELO’s spaceship prop from the 1970s. It won’t cost you a penny. Do you grant that wish?

The old one was made of fibreglass and made a right ol’ racket. It was dramatic in its day. But that’s easy to do now with projections and LEDs, so I think not.

Is the plan to make another album? Are ELO really reborn?

The tour begins in Liverpool on April 5.