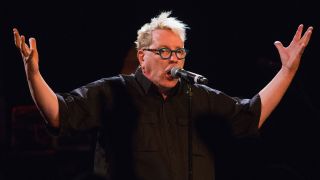 It’s no longer necessary to sign a record deal. I’ve had to break ties with large labels to make the music I want, so I can’t recommend any of them to anyone anymore. It’s a shame because there were many good aspects of being on a major, not least the safety and security of the net they could protect you with before putting you out on the chopping block, available for criticism.

The best advice I can give a young band starting out today is ignore the charts. If you’re aiming for that sort of success, you’ll need production managers, stage set organisers and be part of that load of tomfoolery.

For a lot of young people, X Factor or American Idol is the only thing they see, so they presume cruise ship music is the order of the day and it’s having an adverse effect, because none of these people are really what you would call live performers. They don’t earn their wings in nightclubs. It’s a couple of singing lessons, a smart frock and you’re off.

Live performances in small, dingy places are essential. It’s the making of any band or performer, that’s the real energy, but less of these events are reported and fewer people are aware of them. The biggest tragedy in modern music is the closing down of live venues. This’ll definitely kill music and it’ll all end up as karaoke-style, cruise ship nonsense. That’s what I’m seeing out there at the moment. Particularly on American awards programmes. The same ten faces every year. Very tedious. If there is a breakout artist included you can smell the money invested.

It’s no accident everybody loves this band; there’s millions pumped into their development and it’s ferociously ugly and anti-music.

But it’s not all hopeless. There are groundswells, all kinds of things coming out of working class neighbourhoods that don’t need the props of the top 30. I’m forever hopeful that there’ll be another cultural groundswell that’ll come from nothing and just happen. I see the seeds being sown every couple of years and then it tapers off, but maybe the tapering off is a good thing because punk found itself in a really ugly world of commerciality too quickly. Too quickly for any of us to realise what was going on and we got swallowed up by no end of imitators who just wanted to be rock stars using the term ‘punk’. Endless bands all looking and sounding the same, conforming to a manifesto written without our consent.

There are all manner of schemes on the internet where they want bands to sign up. Pyramid schemes basically where you’re all supposed to be helping each other, but you get lost in it. It’s a conveyor belt of drudgery, ultimately, where you become as faceless as everybody else they’re trying to wrap you up in.

At some point you have to admit that the masses are incredibly fucking stupid, and if you’re pandering to them you’ll find that they’ll change you and not the other way round. They’ll dominate you just by sheer numbers and you’ll end up bleating along with the flock. I’m quite happy to know that 90% of the people out there listen to shit because to be a diamond in a mud-pile, first you need a mud-pile.

John Lydon was speaking to Ian Fortnam. Limited edition box set reissues of the Public Image Ltd classics Album and Metal Box will be released on October 28. Public Image Ltd are on tour in November.