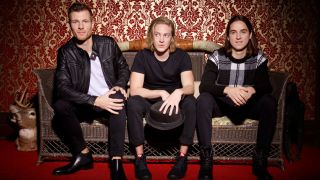 Bleeker look like pretty indie boys, but they play like veteran rockers – who’d probably crush said indie boys with one riff. Having started in 2003 as the grungy Bleeker Ridge (named after the streets they lived on), the Ontario four-piece became Bleeker only in January 2016 following some stylistic and line-up changes. In the process they’ve opened up their sound and embraced a varied, down-the-years diet that includes Billy Joel, The Beatles, Joe Walsh, Jimi Hendrix and more recent influences such as Soundgarden, Jet and Royal Blood. “In Bleeker we write whatever we want,” says vocalist Taylor Perkins, “and we’re not worried about pigeonholing ourselves into one category.”

It was their record label, Five Seven Music, who suggested that some of the band’s older, poppier material, previously discarded for not being heavy enough, was actually on the money. With the band free from the stylistic requirements under their former moniker, their new album, Erase You, is a bright-eyed, biting collection of classy rock’n’roll, vintage sensibilities mixed with teen idol energy.

The original line-up met as 12- and 13-year-olds in a local music shop. Later they met again at a blues jam, and the next day got together and wrote nine songs in six weeks. Through it all, Taylor and his brother Cole, the guitarist/vocalist in the band (which is completed by bassist Mike Vandyk. Currently they don’t have a full-time drummer), were supported by their very musical family.

“I still get together with my grandpa and we play guitars, and he still plays three or four gigs a week,” Perkins says. “My other grandpa was a trumpet player, my dad played us classical records…”

As under-18s, their gig circuit was restricted to more PG places like coffee shops and bluesy jam nights. Not that this proved very limiting.

“I remember playing four or five sets lasting about an hour each, and the bars would stay open past when they were supposed to close, which was two a.m. here,” Perkins recalls. “So we’d play till four in the morning, drive home for an hour and then we’d go to school.”

Small gigs turned into full tours, their name spread across Canada and beyond, and the band picked up support slots including with Iron Maiden and Aerosmith.

“All the bands our age have only been for touring for two or three years, so I think that sets us apart,” Perkins says. “I’ve been touring for thirteen years now.”

It all could have been very different, though. Having achieved top grades in high school, Perkins had the chance to pursue a ‘safer’, academic life.

“I had to choose between a record deal or university,” he remembers. “I’m really happy I chose music. I think I would’ve regretted not doing it for the rest of my life.”

Erase You is out now via Five Seven Music.

“I guess the closest [to our sound] would probably be [Aussie band] Jet,” says Taylor Perkins. It’s great straightforward blues rock’n’roll, and there’s always something so amazing about that. And they were really good songwriters, they had great songs. There’s something about straight-ahead rock’n’roll that’s just awesome.”