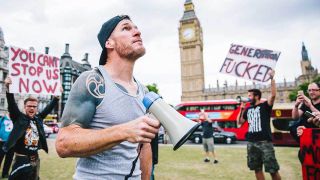 On Tuesday July 26, Rage Against The Machine bassist Tim Commerford brought his new band Wakrat to London to stage a protest. There’s a lot to be angry about in 2016 and London has seen a number of protests in the weeks following the Brexit vote, but Tim’s message is a simple one – we’re all fucked.

Leaving Piccadilly Circus on a bus plastered with #GenerationFucked, Wakrat took a number of friends and fans on a tour of The Capital while playing the band’s debut album at full blast, much to the confusion of passers by.

The destination of this well refreshed bus of revellers was Parliament Square, the finishing point of every major protest in London. Pouring out of the bus with their placards, flags and banners, the Wakrat Army was ready to march.

Lapping the square, chanting that everyone is indeed fucked, ringleader Tim Commerford led his band of merry men and women to the green outside parliament to deliver his speech and officially claim London for the Republic Of Wakrat. Of course, this wasn’t without controversy as the group was swiftly told to move on by the nearby security.

The whole event was filmed for the upcoming Generation Fucked video. We’re not sure when it’s coming out, but we reckon it will look something like this…

All photos by Derek Bremner.

Wakrat is out November 8, via Earache Records.