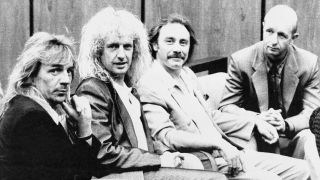 In 1990, metal faced a big crisis. One that could have changed the nature of the music as we know it now.

It all centred on a court case featuring Judas Priest, who were sued over the actions of two fans five years previously. On December 23, 1985, 20-year-old James Vance and 18-year-old Raymond Belknap, who lived in Sparks, Nevada, went to a playground in a local church and shot themselves at point blank range with a shotgun. Belknap died instantly, while Vance survived for a further three years, before dying from the complications brought on through his injuries.

Yes, it was tragic. But what had it to do with Priest? Well, the two teenagers were said to have been listening to Priest records earlier that day, while drinking heavily and smoking marijuana. And it was this combination that eventually led to their suicide pact.

The two families subsequently alleged that Priest had placed subliminal messages in several places on the 1978 Stained Class album, inciting fans – specifically this pair – to kill themselves. Some of these were inserted using backwards masking. This was said to have been most obvious in the song Better By You, Better Than Me, where hidden messages told fans ‘Let’s be dead’ and ‘Do it’. And these incitements, claimed the lawyers acting on behalf of the families, were directly responsible for the deaths.

Both the band and record label CBS were named in a civil case, which went to trial at the Washoe County District Court on July 16, 1990.

Eventually, the case against Priest and their label was dismissed. But had the verdict gone the other way, it could have opened the portals for a raft of such cases and would probably have led to the banning of a considerable number of metal albums and songs. This ban could even have reached the point where metal bands weren’t being signed, and might have faced problems in playing live. The ramifications may have been so far-reaching as to have driven the music almost to the point of extinction.

At the time, Priest guitarist Glenn Tipton said: “It’s a fact that if you play speech backwards, some of it will seem to make sense. So I asked permission to go into a studio and find some perfectly innocent phonetic flukes. The lawyers didn’t want to do it, but I insisted. We bought a copy of the Stained Class album in a local record shop, went into the studio, recorded it to tape, turned it over and played it backwards. Right away we found ‘Hey ma, my chair’s broken’ and ‘Give me a peppermint’ and ‘Help me keep a job’.”

“It was like Disneyworld,” Rob Halford commented on the trial. “We had no idea what a subliminal message was – it was just a combination of some weird guitar sounds, and the way I exhaled between lyrics. I had to sing Better By You, Better Than Me in court, a cappella. I think that was when the judge thought, ‘What am I doing here? No band goes out of its way to kill its fans’.”

“It tore us up emotionally hearing someone say to the judge and the cameras that this is a band that creates music that kills young people. We accept that some people don’t like heavy metal, but we can’t let them convince us that it’s negative and destructive. Heavy metal is a friend that gives people great pleasure and enjoyment and helps them through hard times.”

In the end, the judge actually did agree that there were subliminal messages, but these were “only discernible after their location had been identified and after the sounds were isolated and amplified. The sounds would not be consciously discernible to the ordinary listener under normal listening conditions”.

Now, all these years later, the whole area of subliminal and backwards messages gives a lot less concern when it comes to possible legal threats. But, for a short while in that Reno court house, things looked very troubled for our world.