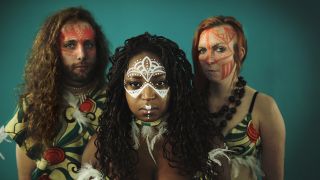 “We know it’s time to break down the barriers and release ourselves, so we give absolutely everything. For us it’s slightly synonymous with the rituals of being possessed. We just kind of let rip.”

Brown doesn’t take rock‘n’roll lightly. Vōdūn deliver a fierce fusion of Afro-psych, heavy soul and voodoo metal. Formed in 2012, they dedicate themselves to the cultural cosmology of Vōdūn itself, the West African religion with roots stretching back some 6,000 years. The band are a physical expression of this rich and complex history, each member adopting a traditional spirit name as a signifier. Brown is otherwise known as Oya, drummer Zel Baterista is Ogoun and guitarist Linz Eel is Marassa.

Brown and Baterista previously played together in London-based band Invasion. That band’s 2009 debut, The Master Alchemist, was a declamatory soul-metal holler that suggested a promising future, but the three-piece were unable to stay together.

Regrouping after a couple of years apart, during which time Zel played in hardcore riot grrrls Pettybone, the pair threw themselves into Vōdūn. “We decided to liberate ourselves and do something of real importance,” explains Brown. “We were already writing about things like animism, and when we looked into Vōdūn [the religion] it seemed to fit with everything we wanted to put across. Vōdūn has been completely demonised, and it was a revelation to realise that it isn’t a negative thing at all. It’s actually a really positive religion, so we decided to tap into some of its spirits. Here was this amazing practice that we could shine a beacon towards.”

The initial line-up, with guitarist Oli, released the EP Eat Up The Sun in 2013. Now, with his thunderous replacement Linz (aka Lindsay Hamilton), Vōdūn have released their debut album, Possession. A remarkable piece of work it is too, its heavy-duty riffs and rhythms offset by Brown’s rapturous soul voice. “I don’t think there’s enough crossing of genres in modern music,” she argues. “I’ve always been an eclectic person.”

Performing is in Brown’s blood. Her American parents are both musicians, her mother being noted session singer Debra Lewis-Brown. Brown’s aunt is the legendary singer PP Arnold. It follows that Brown’s musical education has been broad, absorbing R&B and soul as much as classic rock and heavy prog in a career that has included vocals for Do Me Bad Things and Chrome Hoof.

Vōdūn, she states, is the band she’s always wanted to be in: “I get to embody something that is of my culture and my people. And I get to dress up! Mix that in with the music, which has elements of highlife, Afrobeat, doom, stoner and soul, and it’s just fantastic. We have so much more to give.”

FOR FANS OF: Captain Beyond

“We all got into Captain Beyond on tour a couple of years ago,” says Chantal Brown. “Their debut album feels like one amazing, continuous piece of music. It was such a beautiful thing for them to accomplish, with all these songs weaving in and out of a main theme.”