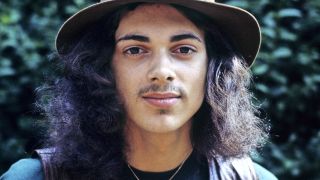 Andy Fraser was the musical lynchpin of Free. While all four original members were exceptional talents, it was Fraser, with his classical training and greater experience playing in clubs across London in the mid-60s, who gave the band its edge.

“Andy was the most amazing musician,” says Simon Kirke, speaking to Classic Rock in the days following Fraser’s death. “As a bass player he was up there with Jack Bruce. But as Andy would say, if he was around now, he wasn’t just a bass player, he was a great all-round musician. He had this amazing ability to listen to something and play it straight back.”

When Andy Fraser walked away from Free in 1972, having co-authored their two biggest hits in All Right Now and My Brother Jake, his future looked assured. He’d just formed his own band, Sharks, a Free-alike outfit also signed to Island Records, that featured Chris Spedding in the Kossoff role and gravelly voiced singer Snips (aka Steve Parsons) holding the mic. But following a car crash Fraser left the band and eventually fell into comparative obscurity.

Having relocating to California in the mid-70s, his name would still come up on credits for albums by Rod Stewart, Robert Palmer and others. Mainly, though, no one really heard from Fraser for years, decades. Not even his old Free bandmates Paul Rodgers and Simon Kirke.

“He was a very confident, amazing little guy,” says Kirke. “At the same time, he wasn’t the easiest bloke to get along with. I’m not going to sugar-coat it. He could be a royal pain the arse. I think growing up the son of a mixed-race couple it was very hard, and he developed this shell of toughness around him, even though he was quite a small guy. After we split up in 1972 we never really kept in touch. But he was a musical force. I was very much in awe of him, because he had this amazing ability to play music of whatever genre.”

After Free’s final split, in 1973, Rodgers and Kirke went on to huge success in America with Bad Company. I once asked the bassist if he was ever jealous of his former colleagues. “No, no, no, no, no,” he insisted. “No, never! Truly, I wouldn’t have wanted to be a part of that. And I’m very happy that they earn a shit-load of money. But no, that wasn’t me at all. I had new things I had to do. I had to start again from scratch.”

Fraser had once fancied himself a solo singer, but he gave up that ambition as the years sped by and he was first diagnosed with cancer, and then as HIV-positive. Yet still he never reached out to any of his former companions in Free.

“After Andy moved to LA I didn’t see him for years and years,” says Kirke. “Then I came through town when I was playing with Ringo Starr. We got in touch and he came to see the band, and Jack Bruce wanted to meet him. But the House Of Blues staff, where we were playing, wouldn’t let Andy in cos he was wearing shorts!

“Prior to the show, though, I’d met Andy in the hotel and he played me some songs he’d been working on that he played everything on. Then he casually let me know that he was HIV-positive, and I had no idea: a) that he was gay, and b) that he had contracted HIV. So we didn’t really talk about it. I wished him well, gave him a hug.

“When I heard he’s passed away I was so surprised. He was a health nut. He was into healthy living, exercising for hours every day. So even though I knew he’d been ill I was still really surprised to hear he had died. I really hadn’t known he was quite so ill. But that was Andy. He never let on about how much he might have been suffering. He was a tough little nut.”

Paul Rodgers’s relationship with Fraser was more complicated. While the pair made a formidable songwriting team, the difference in personality between the two was ultimately insurmountable. “There’s not much interaction between me and Paul these days,” Andy told me when we spoke in 2014. “We’re both on different pages, and whenever we talk we both have an uncomfortable time.” Rodgers has never denied that Fraser’s split from Free in 1972 was the culmination of a lengthy power struggle between the two of them for musical ownership of the group. Yet he admits that the bassist’s passing grieves him.

“You know, I feel I only knew Andy when we were kids, I never really knew the man,” Rodgers tells Classic Rock now. “I tried over the years to find common ground, but we couldn’t reconnect. He was a gifted songwriter and a gifted bass player who will live on forever musically. I will always think well of him. I hope he is at peace now.”

Fire And Water: The Making Of Free's Masterpiece

BACK TO NEWS & REGULARS