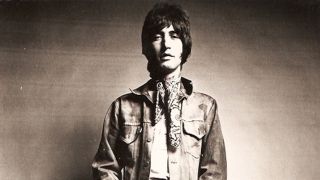 Leslie Cavendish was the hair stylist to The Beatles from 1967 onwards and ran the Apple hairdressing salon in the King’s Road. He accompanied them on the Magical Mystery Tour, at EMI during recording sessions and at the rooftop concert in 1969. East End-born Leslie first met The Beatles when Jane Asher, who was one of his clients at Vidal Sassoon, asked him to cut her boyfriend Paul’s hair.

What was it like the first time you cut a Beatle’s hair?

I was excited and nervous. When I arrived at Paul’s house, I had to get past the ‘Apple Scruffs’ girls first. The housekeeper answered the doorbell but Paul opened the door himself. I saw his Aston Martin and I thought, crikey, only James Bond’s got one of those. He offered me tea; he was very relaxed and put me at ease. The home was messy, lived-in. He had a piano, some guitars, but it wasn’t a pop star house. We went to the ensuite bedroom to cut his hair, which was looking a bit straggly. The only thing I was worried about was ‘don’t muck up his hair at the front’ because that fringe is part of the Beatle look. I washed his hair over the basin, with him leaning forward, and dried it with my fingers. When I showed it to him he said: ‘Great, it doesn’t look like I’ve had a haircut.’ That was the stamp of approval.

I couldn’t really say to Paul, by the way that’ll be two guineas [£80-£100]. At the time I would’ve paid him to cut his hair. The second time I went round Paul said ‘Send the invoice to Derek (Taylor, the Beatles’ press officer)’. I used to take the invoice into Apple and I always made sure I had my scissors with me, in case John Lennon was there and asked for a haircut. The ones I cut the most were Paul, George and John, in that order. Not so much Ringo, because his wife Maureen was a hairdresser.

Did you influence the way the band’s hair looked, or did they come in knowing exactly what they wanted?

They were their own bosses. The sign of a good haircut is for people not to notice you’ve had your hair cut. Although it was my idea to cut Paul’s hair short so that he could visit Jane Asher in South Africa without being recognised. The press called me ‘The barber who gave Paul a skinhead’.

How conscious were they of the way their hair was perceived by the public?

When any of The Beatles grew a beard, or John Lennon grew long sideburns, people copied it. The group were more concerned with their music and didn’t make money on the way they looked.

Was the long hair an attempt to distance themselves from the moptop thing? What did it mean when a Beatle changed their hair?

It’s just progression. Things changed after Epstein died. The longer hair is signalling the move towards them separating as they didn’t look the same any more. On the Let It Be album cover, you’ve got George with a moustache, Paul with a beard and Ringo with a different moustache. John had let his hair grow really long and wispy, to match Yoko’s. I used to say to him, ‘John, I’ve got to trim the ends, otherwise they’ll break off’. But then he went on his ‘hair peace’ thing and he just let it grow longer and longer. It was a form of rebellion.

Musicians tend to keep the same hairstyle as when they were first famous. Paul McCartney (72) looks like he’s wearing a Beatle wig. What do you think of this?

I don’t like it. I don’t think George Harrison would’ve dyed his hair. John in a million years wouldn’t. Ringo doesn’t. I think it happened when Paul met Heather Mills. His hair has gone reddish, which is very strange. When he’s on stage the lights shine on it and it looks red. I can’t understand why he’d do that, because he’s got a great head of hair. I used to say to Paul, ‘you and I will always have hair’, from the song When I’m 64, (‘When I get older, losing my hair’).

Were there any times you saw behind the public mask?

Ringo was very tetchy in the recording studio. Once I was asked to leave, because Paul was telling Ringo how to play the drums. Paul is an incredible drummer. And if it wasn’t right, he’d go up to Ringo… I can’t imagine Roger Daltrey or Pete Townshend going up to Keith Moon and saying play it like this – they’d probably get a whack round the head. I think they underestimated Ringo.

I once took Paul and our girlfriends to a nightclub in the King’s Road in the back of my Mini. I’m not putting a halo on the guy but he never played the big star and was always accommodating to fans asking for autographs. We used to call it ‘being Beatled’. He did go through a dark period after he split from Jane Asher (in July 1968) but when I saw him at home he was always engrossed in his music.

Who came into Apple Tailoring and the hairdressing salon?

George Harrison came in with Brian Jones and Jimi Hendrix one day. We had all these pieces of beautiful velvet, stacks of it, in about 50 colours. Hendrix said, ‘Oh that looks really good’, he picked a double-breasted velvet jacket in apple green, then said, ‘Just gimme all the colours’. They could order 40 or 50 jackets, money was no object.

Apple Tailoring at 161 Kings Road. Leslie Cavendish’s hair salon was in the basement.

Did they ever play you any songs?

We’d go down to EMI/Abbey Road at about 10pm, you made sure you zipped it, didn’t say a word. I had to take my hairdryer down there as well. They were rehearsing snippets of songs that I’d never heard before. Paul was on the piano, George came and they played In My Life and sang it together - that was incredible. John was in the corner having his hair stroked by Yoko. Paul was just playing around with this song, and said, what do you think of it? “Ob la di, ob la di, life goes on boy’, and I went home humming it. It’s not the greatest song in the world but it had a hook.

You were on the Magical Mystery Tour bus…

I got to Allsop Place, near Madame Tussauds at 8.30am and Paul was sitting on the pavement. The bus was two and a half hours late because they hadn’t finished painting it, so we all went in the London Transport Café and got a cup of tea. In my head it was like going on tour with the Beatles. They were filming but there was no ‘take one’, no script, although Paul was writing things down. He was the conductor, We drove to Weybridge to pick up the other three and there was a lot of singing and banter on the bus, Ringo’s ‘Aunt Jessie’ was a good laugh. It was fun but very disorganised and loose.

Leslie (circled) with the other Magical Mystery tourists.

I don’t think anyone knew it would be the last time they would perform. A little bird told me it was worth going over to Apple as there was something interesting going on. I could see wires and instruments being taken upstairs. I got onto the third floor and I saw The Beatles going up to the roof with Mal Evans, the road manager. The next thing you know, we could hear them playing Get Back. I looked out the window and you could see people walking down the street, it was lunchtime, they heard the music and looked up, and suddenly the whole road was completely blocked. It was brilliant.

What pressures came with being associated with The Beatles?

The News Of the World offered me £5000 to spill the beans. When the ‘Paul is dead’ rumour started, the newspapers phoned up and asked, how do you know it’s the real Paul McCartney? I said, ‘I know it’s the real Paul, because if you push your hair back, everyone has a break in their hair and I know where Paul’s hair parts.’ I never, ever asked for cuttings of their hair to give to people, except for my cousin, she thought Paul was God and he let her have a snippet. Another time, Disc music paper interviewed me, and that ended up in the headline ‘John Lennon likely to go bald’. I felt terrible. John rang me up and I started apologising and he said, ‘Hold on, son. I know what it’s like. I once gave an interview and said we’re more popular than Jesus.’ So he said, ‘If I’m going f**king bald, you better come over and fix it!’ With that, he was great.

**If your newsagent isn’t selling issue 202 of Classic Rock, you can order it online from MyFavouriteMagazines. **

**Also: for this month only, customers buying copies of Classic Rock in branches of Morrisons will save £1 off the normal retail price. **