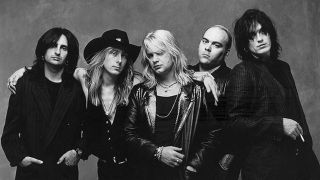 Hardcore punk sprang from the rot of mainstream rock in the late ‘70s, its spike-haired adherents so angry and frustrated that even first-wave punks like the Pistols and the Ramones sounded dated, pedestrian and safe in comparison. The initial batch of hardcore bands formed during the perfect storm of a downward economy and a trigger-happy new regime in the White House. They were broke, they hated Reagan and their parents, they just wanted to drink beer and skateboard in abandoned pools, graffiti the neighbourhood, commit petty crimes, spit in the eye of authority and promote general ill-will.

Hardcore was ferociously anti-mainstream, perhaps the last rock’n’roll sub-genre ever created with no commercial aspirations whatsoever. While it sparked in San Francisco as a reaction to the hippies who still roamed freely, it really caught fire in the early ‘80s in the gang-strewn wasteland of Los Angeles, with feral audio terrorists like Black Flag, the Germs and the Circle Jerks, bands who were all tooth and nail and rag and bone, gushing buckets of testosterone as they raged against the machine in brutal two-minute chunks of three-chord flail. At times, they barely passed for music at all, but this startling new noise spread like some kind of teenage rabies epidemic throughout the US, forming deep pockets of hardcore mania in cities like Boston, Detroit, New York City and Washington, DC. And soon after, the world.

Fast forward a few years and we are suddenly waist-deep in the flash metal era. Hardcore, naturally, could not care less about spandex and hairspray. That shit was strictly for bourgeois mainstream lame-os, and when punk bands attempted to dip their toes into the stuff, it was generally a disaster (hello Discharge). But many of the original hardcore bands had been at it for half a decade already, and let’s face it, hardcore punk is really only effective when it’s played by hormonal teenagers who have yet to master their instruments.

So what happens if you’re in a three-chord punk band and you learn a fourth chord? What then? For a lot of bands, the answer was “crossover”. They grew their hair out and switched to thrash metal. See DRI, Necros, Agnostic Front, GBH, FU’s/Strawdogs, COC, SSD, Raw Power, etc. And that worked out pretty well for everybody. Sure, they went “metal”, but it wasn’t, you know, glammy bullshit. It was still pretty hardcore.

But there was one band rooted in hardcore who managed, somehow, to infiltrate the hair-flipping world of flash metal while keeping their integrity intact. Junkyard arrived at the tail-end of the era, when glam had congealed into the post-Guns world of Sleaze/Biker metal, when bands like Circus of Power, Danzig, Four Horsemen, Warrior Soul, Little Caesar, Two Bit Thief, Zodiac Mindwarp and The Cult defined the sound and vision of the genre. For a band that bled motor oil and cited Motorhead and ZZ Top as chief influences, it was a good time to crash the party.

Junkyard formed in LA, but their roots were in Austin. It’s a long story, but the gist of it is that the band was littered with ex-punks, including members of seminal Austin hardcore band Big Boys (and the equally seminal Austin “blues-punk” pioneers Poison 13), even more seminal DC hardcore band Minor Threat, Ohio hardcore/thrashers Necros and LA hardcore-turned-glampunks Decry (lots of punks loved Hanoi Rocks as much as they did Venom and Motorhead, true story).

By 1989 flash metal was less about parties and more about biker rallies. A ropey sort of tattooed, hard-bitten masculinity had set in, a natural reaction to a decade’s worth of pop metal and power ballads and white fringed leather jackets and polka-dots. There was a palpable back-to-the-roots vibe to the music in 1989, and Junkyard’s decidedly hardcore past fit right in. Naturally they were snatched up by Geffen and their self-titled debut hit the bins in 1989. Produced by Tom Werman (Motley Crue, Cheap Trick, Blue Oyster Cult) in classic late ‘80s booming-cardboard-drums-everywhere fashion, Junkyard was state-of-the-art sleaze, oozing with back alley grit and reeking of used leather, cheap perfume, and even cheaper whiskey. It spawned two minor (but enduring) hits, the hard-charging Hollywood and the moonshine sippin’ southern rocker Simple Man. There was no “sell-out” backlash, since most of the people snatching up the debut had never heard of Minor Threat or the Big Boys, and the people who had gave ‘em the respect they deserved.

Life was good for Junkyard. They seemed like the kinda band that could keep this going for awhile. They toured with Black Crowes, which made sense, and later with The Almighty and Lynyrd Skynyrd, which made even more sense. Their second album, Sixes Sevens and Nines, was released in 1991. It’s solid, maybe even better than the first one, but 1991 was a watershed year for everything “alt-rock” and Junkyard, despite their punk pedigree, already seemed like old-fashioned establishment types. From snarly young punks to over-the-hill classic rockers in two years, man. That’s gotta be a bitch. Geffen dropped them a year later and they were lost in the mists of rock’n’roll history.

For a while, anyway. The band reformed, more or less, around 2000 and have been playing gigs and releasing music ever since. They released a single, Faded, just last year. It’s bad-ass. Middle-aged bad-ass, but bad-ass nonetheless.

Next week: Babysitters on Acid