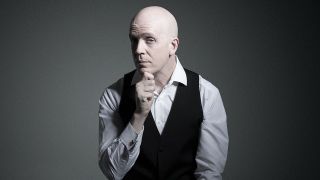 After an unusually quiet period (well, by his standards), unstoppable metal chameleon Devin Townsend is unleashed his multi-layered, multi-textured, multi-everything album Empath last year– an album that, even by his standards, challenged all but his most diehard of listeners.

Hevy Devy has come in peace to answer your most important questions on Ziltoid, disgusting hair and farts going horribly wrong. Just the serious stuff, basically.

When are you reforming Strapping Young Lad?

“My favourite part of that question is the word ‘when’, as if there’s been any indication it’ll happen. I’m not reforming Strapping, but the fact that people are so into that band and keep wanting me to do it is a huge honour for me, that’s the biggest possible comment anybody could give to me. I like to think I’ll keep making projects that people will pine for, so thank you so much for caring about it.”

What’s the most embarrassing thing to happen to you whilst on tour?

“There was a girl I used to work with when I was young and, as strange as it sounds, I would fart around her and she would think it was funny. I was on tour a couple of years later and I saw her outside a venue with her friends, I hadn’t seen her in a long time. I went up to her asking if she remembered me and I tried to blow a fart and I shit myself right in front of them.

“I felt more embarrassed for her that she knew somebody that thought on some level it would be appropriate to fart in front of her and her friends. To compound that, I told my mother that story at a restaurant and, while telling her, I shit myself again. That’s a double whammy of the sexy gallantry that defines most of my work.”

Is there any truth to the rumour that the hair on the Ziltoid puppet you used for ZTV is yours?

“There’s 100% truth! When I was in Strapping, I had shitty dreads because I’d never wash my hair. There’s images of me at Download Festival with snot in those dreads and I didn’t shower after that show, they were a petri dish of self-deprecation and biological horror.

“So when I cut my hair, I kept them all in a box and when I made Ziltoid, he clearly needed to have my hair. I remember telling my wife that I put my hair on him and she looked at me as if I was wearing her sweater, then we never spoke of it again.”

Which Strapping Young Lad album(s) do you feel more proud of and which are you least proud of?

“I’m least proud of the self-titled album. Even though I like it, I didn’t do with it what I could, I could’ve gone so much further but I was too busy doing Accelerated Evolution at the same time. City defines Strapping in my mind as it was the best one for me but I think Alien is the one I’m most proud of technically, because Gene [Hoglan] and I had a lot of fun making it. I’m not a huge fan of the final mix but I’m an imperfect perfectionist and nothing is ever right.”

Have you ever had moments where you questioned whether you could really deal with all the stress and excitement that comes with wide recognition in the music industry?

“This morning, yesterday, the day before, I’ve got that planned for tomorrow – I’m 46 years old living a life that was decided for me by 15-year-old me. Back then, I really liked the attention and validation from strangers was important to me. As I got older, I realised I’m an introvert but the more I was able to creatively articulate myself, the more attention I got and I’m not comfortable with that.

“I don’t like being recognised. My 15-year-old self would be really happy with things now because even this new Empath record isn’t something that the general population would call their favourite record. As I get older, I’m able to make un-compromised music which guarantees that my anonymous needs are met.”

Can you play the banjo?

“If I tune it and play it like a guitar, then on some level it’s technically playing the banjo but in terms of real bluegrass, I cannot. My dad played it so I have an affinity with it but he cut the tip of his finger off with a planer at work one day so the banjo sounds in my house promptly came to an end.”

If you could make a movie about Ziltoid, would you?

“Yes, but my role would be creative director so I could say what I wanted but not have to do the grind. I don’t enjoy making movies, acting or filming but I love seeing it. If anybody said they’d love to make a Ziltoid movie, I’d say, ‘Great, here are the ideas, let’s have a brainstorm about it and let me know when you’re shooting.’”

How does a musical god choose to spend his Sundays?

“If I knew a musical god, I’d let him know! Although a lot of the music I write is complicated, I’m not a complicated person at all and that’s why when I write something good, I wonder where it came from. I’m very simple. I like eating, watching documentaries, How It’s Made and Antiques Roadshow. I also like humping every now and then. Left to my own devices, I’d be a very slothful and boring person but life had other plans so I don’t get the opportunity very often.”

Is there a possibility we could see a Ziltoid and GWAR collab?

“I love GWAR but Dave Brockie was my buddy, we were really good friends and we stayed at each other’s houses. My connection to GWAR was Dave, and as much as I like the other guys, it was Dave I really related to. Ziltoid was basically, at least in part, influenced by that. Before he died, Dave handmade an amazing Ziltoid mask for me that looks like a GWAR prop. It’s displayed in my friend’s sushi restaurant in Vancouver.”

Do you think the skullet could ever make a reappearance?

“For those who are not familiar, the skullet is bald on top and dreads on the side – an ostrich egg wearing a hula skirt. When I started going bald, I had a friend that would get a kick out of from making fun of me losing my hair and he almost single-handedly gave me the decision to grow it and nearly frame it. I remember when Strapping ended, I went into the bank with that hairstyle and I felt like Krusty the Clown from The Simpsons.

“I realised my reason for having it wasn’t because I was comfortable with it, but more because I was being contrary. It smelt bad, it wasn’t good for me practically, it wasn’t the most attractive thing for my relationship. Long story long, I can’t wait to not have the skullet again.”

At what point does one have too many pedals?

“I have too many pedals! You can make your own vision on what is creatively important for you to work with. To me, an acoustic guitar is all you need, hence why I’m doing this acoustic tour because I think it’s important to bring it back to the basics.

“Any pedals might be too many depending on your point of view, so you should make up your own mind and not worry too much about what your mother tells you. My mother always used to say, ‘Another pedal, are you kidding me?’ Then again, I had six delays and 12 reverbs at the same time. I hoard echoes, I’m into it.”

Plus, the man himself will be headlining this year's Bloodstock Open Air festival alongside Behemoth, Judas Priest and many more at Catton Park, Derbyshire – check out Bloodstock's official site for more information and tickets.