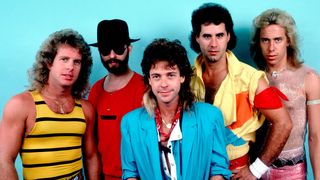 "Sing it,” says Night Ranger’s Kelly Keagy. It’s a tempting invitation, but as Classic Rock demures, the affable drummer/vocalist rips into it for us… “You see?” he says after chirping just the word ‘Motoring!’ “You just sing that one word and you feel good instantly. I think that’s why the song was such a hit.”

We’ve been talking about the enduring, and somewhat perplexing, appeal of Sister Christian, Night Ranger’s mammoth power ballad from 1984. It was a lighter-in-the-air anthem; a zeitgeist moment; the kind of song that can turn a B-level hard rock/hair metal San Francisco band into worldwide headliners. “Basically it’s one of those songs you just have to thank God for,” says bassist/singer Jack Blades. “It’s been used at weddings, proms… Every few years it seems to be discovered in some new way.”

The band had hits before it – driving rockers like Don’t Tell Me You Love Me and (You Can Still) Rock In America in the US – but Sister Christian proved an impossible act to follow. “And we didn’t want to have to Xerox it,” says guitarist Brad Gillis. “We weren’t against ballads – every album of ours has had them – but we didn’t want to become known as a ballad band. That’s how you become Air Supply.”

However, it was ballads – or at least songs that duplicated the same multi-format accessibility of Sister Christian – that Night Ranger’s record label clamoured for back then. But in 1989, rather than knocking their heads against the wall the band decided to pack it in. “It was depressing to let go of something that meant so much to us,” says Gillis. “But we didn’t want to start sucking and hating each other. It was right to just say: ‘Hey, we had a good run.’”

In the immortal words of John Lennon, the separation was a failure. In 1996 Night Ranger regrouped (Keagy, Blades, Gillis and guitarist Jeff Watson, along with former Great White keyboard player Michael Lardie) and began rebuilding their touring base. “Little by little, it’s worked,” says Keagy. “We’re hotter than wasabi in Japan; America and England, too. It’s taken us a little over 10 years but it’s been worth it.”

The band are circumspect when considering their present commercial prospects (“It’s anyone’s guess what we can sell these days,” Gillis says), but they’re happily anticipating hitting the road this summer. “The stage is where we’ve always done our best work,” Blades says. “We love making albums, but Night Ranger is all about playing live.” Jack Blades, Brad Gillis and Kelly Keagy sat down with Classic Rock recently to talk about the band’s history together.

Jay Jay French from Twisted Sister recently said that any band from the 80s, with the exception of U2, that continues to make records in this day and age is crazy. That you only sell 10 per cent of what you used to, the audiences have all moved on, etc.

Jack Blades: Perhaps that theory holds true in Twisted Sister’s case, I wouldn’t know. Hey, we love making records, and I’m not going to stop just because we might not sell as many copies as we did in our heyday. We’re not kidding ourselves, we don’t expect to have a No.1 album and sell 10 million copies. And yeah, we’re not as young as we used to be, so maybe we’re not as sexy to the kids as once upon a time. But we’re not fartin’ dust just yet. There’s still a healthy demand for our music, and we’ll continue making it.

Brad Gillis: If you can still get a record deal then you should go for it. Besides, records give you greater leverage when it comes to touring, which is where we really shine. Sometimes you get some action at radio, sometimes the magazines pick up on your new album – every little bit helps.

Kelly Keagy: The truth is, we got in the music business because we wanted to have fun. Maybe Jay Jay French doesn’t have fun playing music any more, and if that’s the case he should think about something else. But the guys in Night Ranger, we still have a blast. It’s all about creating. As long as we create something, I don’t care if we sell one record. Oh, come on. I can’t believe that. Keagy:Well, of course I want to sell records. I was just being dramatic. Let’s just say, I don’t focus on the selling aspect. We’re a band and we make records. Case closed.

What is a night ranger, anyway? A park ranger who works the graveyard shift?

Blades: [laughs] That’s an excellent question! You know, originally we were called Ranger.

Keagy: Yeah, but not like the goofy guy in a forest. We saw a ranger as a cool kind of protector, like a secret agent or superhero street guy. He’s always where the action is, he’s always in the clubs, he’s checkin’ everything out. Superhero Street Guys would have been better: you could have had action figures, lunch boxes – you name it.

Blades: It’s not bad… But we were called Ranger and just as we were set to release our debut album, Dawn Patrol – with something like 10,000 covers printed up with the name Ranger – I spotted an ad in Billboard for a country band called The Rangers. I looked at that and went: “Uh-oh.” So we changed the name to Night Ranger. Which was a song of ours anyway.

To our ears, with Sister Christian you guys invented the ‘power ballad’. You agree?

Keagy: [Laughs] The big drums, the big chorus… Sure, why not? But is it a genre of music? We don’t sit around going: “Okay, time to write the ‘power ballad’.”

Gillis: I don’t know if we invented the form, but we sure had one of the biggest hits.

Blades: I think Journey were doing songs like that before we were. But, hey, people love Sister Christian all over the world, so why not take credit for inventing the power ballad? We’ll take credit for everything.

Gillis: That song really did it for us, man. It took us from middle act to headliner. I’ll never forget driving up to a 7,000-seat arena in Wisconsin and seeing ‘Night Ranger – Sold Out’. And it was all because of Sister Christian.

So what does “motoring” mean?

Keagy: [laughs] That’s so funny. That phrase meant so much to me when I wrote that song. What had happened was, I had gone home to see my sister, who like, 16, and she was doing what was popular back then, which was driving up and down the streets, cruising around looking for guys. They called it “motoring.” It was like out of American Graffiti – driving around, hooking up with everybody. It’s that time in your life when you’re not a kid but you’re not fully an adult either. The band broke up in the early 90s but got back together fairly quickly. What’s your secret to staying together for so long?

Blades: I don’t know if there is a secret. We love what we do; we love playing together. There really isn’t anything else we can do [laughs].

Keagy: We enjoy playing together. Even if we’ve been butting heads and somebody’s mad at somebody else, as soon as we go on stage everything else goes out the window. Give us a stage and a house full of fans and we’re fine.

A couple of tracks on Hole In The Sun – Whatever Happened? and Rock Star – sound like 90s alternative rock.

Gillis: That’s just the way they were written. We didn’t try to make them sound any one way, we just tried to make them cool. But that’s the thing about Night Ranger: we’re always cool because we don’t try to be cool. The cool comes from within.

Keagy: Brad and I are big fans of early-90s music: Soundgarden, Alice in Chains, Nirvana, we love that stuff. I’m sure that’s what we were thinking when we tried to make the stuff more modern, you know?

Gillis: Were we thinking it? I’m not sure. Blades:Actually, I never even thought about it. We just play what we come up with, you know? To me, Night Ranger has always been a rock-pop band. I don’t think we were influenced by alternative rock. Or if we were if wasn’t talked about.

You have another giant power ballad with There is Life.

Keagy: Yeah, that’s me. It’s so funny, because on my solo records I try to do so many other things, but when I come back to Night Ranger I wind up doing the big ballads. I guess I’ve always been drawn to very dramatic songs. That’s not to say I’m not into the hard rock stuff, because I’m as into that as anybody.

Blades: Kelly rocks way hard, man, but he’s a natural when it comes to singing the ballads. He does them better than anybody.

Keagy: I make no claims to being better than anybody. I do what I do.

Brad: you and Jeff [Watson] are playing old-school twin-lead solos like it’s 1985.

Blades: Brad and Jeff are the best twin lead players on the face of the earth. They’re better than anybody at that kind of thing.

Gillis: Well, while the compliments are being tossed around, Jack’s a damned fine bassist, singer-songwriter… What else does he do? Lastly: ever been convicted of a felony?

What about those 80s hairdos the band had in the 80s? They were absolutely criminal.

Keagy: [Laughs] You’re right. We should have been convicted!

Gillis: Those haircuts were felonies. But at the time it was all good. I’ve had short hair since 1995, so I can’t remember what it was like to have long hair.

Blades: We had some poofiness going on back in the day. But you know what? I bet the guys in Korn are going to look at pictures of themselves in 20 years and go: “What were we thinking?!”