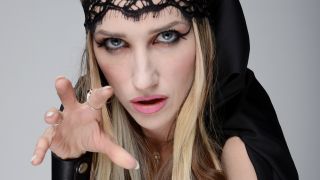 AS YOUR INSTAGRAM FOLLOWERS KNOW, YOU’RE A TRUE CANNABIS CONNOISSEUR. HOW OLD WERE YOU WHEN YOU HAD YOUR FIRST SMOKE?

“I was a teenage stoner witch and I started smoking right around the age of 13, mostly with skaters in the school parking lot or with my weirdo friends in the woods./o:p

DO YOU REMEMBER WHAT IT WAS LIKE THE FIRST TIME YOU GOT STONED?

WHAT’S YOUR LEAST FAVOURITE DRUG AND WHY?

“Cocaine, and that’s mostly because I’ve been surrounded by dumb coke whores for a really long time, having worked in nightlife for so many years as both a promoter and a DJ. It’s not cute when the lights come up at last call. It grosses me out from a social standpoint. I’d rather somebody get an eight-ball and sit alone and do that shit at home.”/o:p

WHAT FIRST DREW YOU TO PAGANISM?

“An overactive imagination. I grew up a farm girl and I’d always been surrounded by nature, so I was very open to nature worship and seeing all of these amazing aspects of paganism come into play in my daily life — mostly the power of visualisation — seeing it, believing it and obtaining it. It started from a very early age, I was probably 13, and it was really brought into my life by a coven that sought me out in upstate New York. From that I built a really strong relationship with my coven members – witches and warlocks – that really helped to guide me along the path. We always find each other.”/o:p

WORDS LIKE ‘COVEN’, ‘WITCHES’ AND ‘WARLOCKS’ CAN CONJURE SOME RATHER FRIGHTENING IMAGES. DID YOU HAVE ANY TREPIDATION ABOUT FIRST CONNECTING WITH YOUR COVEN?

“Not at all. I’ve always walked the path of light and black magick has never been an aspect of my path.”

HAVE YOU EVER RUN ACROSS BLACK MAGICK PERSONALLY?

“I’ve stood at the edge of black magick and I’ve seen the darkness envelop people, and it’s sad, really. You see negativity root within a person like an evil tree. There’s a lot of danger lurking within the corners of witchcraft, so you really have to be strong and truthful and you really have to protect yourself. I always imagine light around myself and those I love.”

CAN YOU RECALL THE FIRST TIME THAT YOU FELT LIKE A ROCKSTAR?

“Ha ha ha! I’m cognisant of many things regarding the rapid climb of Huntress, but I’m still not playing into the whole rockstar thing. Once I start believing the hype, I’ll become an asshole. I still don’t feel like a rockstar and I push that aspect of being in a band far away from me.”

WHAT’S BEEN YOUR WEIRDEST EXPERIENCE WITH A FAN?

“A fan gave me a dainty little box. I opened it, and inside was a little dried piece of flesh. I said, ‘What is this?’ and he said, ‘That’s my belly button from when I was an infant, and I want you to have it.’ Kind of creepy but endearing. So I gave him a hug and said, ‘Thank you for this gift.’ I still have it. I like weird shit, you know? Keep it weird.”

WHAT’S ONE BAD HABIT THAT YOU CAN’T SEEM TO BREAK?

“My inability to compromise. It’s always been a struggle to let go of control, especially in my vision for Huntress. You’re in a band with other individuals with their own ideas. But I can’t do this alone, so you do have to take into account what they want to include in the project and what they see as the ultimate vision. Fortunately I’ve had a band where we’ve all linked to the same vision and I think that’s one of the reasons why Huntress has been so successful so early in our journey. So that’s been challenging for me. Any creative person would really take issue with compromise and for me, that’s the one thing I have trouble getting over, but I’m pretty easygoing otherwise.”

DO YOU HAVE ANY PHOBIAS OR IRRATIONAL FEARS?

“I grew up in a very Polish family from the old country – I’m second generation – so my grandmother, who was born in 1919 and who came over here from Poland, brought all those superstitions with her. That shaped a lot of my early life with my grandmother. I’ve learned to shed most of those superstitions, but anytime a cat walks across my path, I spit three times to avoid bad luck. I don’t even believe in bad luck, but it’s so ingrained in me from my grandmother that when a cat walks in front of you, you have to spit three times.”

WHAT DO YOU WANT ON YOUR TOMBSTONE?

HUNTRESS’S STARBOUND BEAST IS OUT NOW VIA NAPALM/o:p