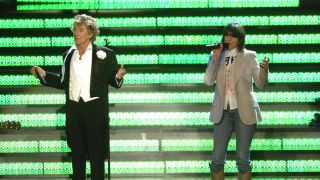 Classic Rock 199 finds Chrissie Hynde flying solo for the first time. Here, we pick 11 moments from the singer's history where she shared the spotlight with others.

Hynde was among the starry throng of admirers who queued up to pay tribute at Bob Dylan’s 30th Anniversary gig in Madison Square Garden in October 1992. Backed by surviving members of Booker T. and the MG’s (Booker T. Jones, Donald ‘Duck’ Dunn and Steve Cropper), she conjures a fine rendition of I Shall Be Released.

In 1995, Hynde appeared as jobbing songstress Stephanie in an episode of US TV comedy, Friends. After performing an acoustic version of Chip Taylor’s Angel Of The Morning at Central Perk, the epilogue found her struggling to come to terms with Smelly Cat, under the ‘tutelage’ of Lisa Kudrow’s Phoebe character.

John Cale and Nick Cave joined Hynde for BBC TV’s Songwriters’ Circle show in July 1999. Filmed at London’s Subterania Club in London, here they make a fine fist of Ship Of Fools. The trio also performed I’m Waiting For The Man. Eleven years later Hynde reunited with Cave on a cover of Screamin’ Jay Hawkins’ I Put A Spell On You, on an all-star benefit single for the Haiti disaster.

A priceless nugget from Da Ali G Show in April 2000. Hynde is greeted by Sacha Baron Cohen’s titular host, who prefaces her rendition of The Persuaders’ Thin Line Between Love And Hate by explaining that the main reason she’s on is for his Uncle Jamal, who’s always dreamt of a sandwich with Hynde and Suzi Quatro.

So much for debonair Rod. The Face-turned-easycore-crooner cocks up the opening bars of As Time Goes By, his duet with Hynde, because “I was just looking at you. You’re so gorgeous!” Joined by the BBC Concert Orchestra, this 2004 gig was issued on DVD as One Night Only! Rod Stewart Live at the Royal Albert Hall. Two years later he covered The Pretenders’ I’ll Stand By You on Still The Same…Great Rock Classics Of Our Time.

Black vests abound as Hynde introduces “the greatest human being in the world” before Iggy Pop takes aim at Candy with The Pretenders. Filmed in Atlantic City, New Jersey as part of US TV’s Decades Rock Live! series in August 2006, Hynde’s other guests were Incubus, Kings of Leon and Shirley Manson.

Given that she was born in Akron, Ohio, it was fitting that Hynde appear with fellow natives Devo and The Black Keys during a hometown benefit show for then-presidential candidate Barack Obama in October 2008. As a student at Kent State, Hynde had once been in a band with future Devo founder, Mark Mothersbaugh.

In 2009 Hynde, Bob Geldof and David Gilmour teamed up on a version of Graham Nash’s Chicago (We Can Change the World) in an appeal to Barack Obama to stop the extradition of Gary McKinnon to the US for trial. The autistic systems administrator had hacked into Pentagon computers looking for evidence of UFOs and free energy suppression.

For a time in the ‘80s, Hynde and The Kinks’ Ray Davies were an item. They never married (the story goes that they had a blazing row at the registry office), though they did produce a daughter, Natalie. This wistful video from Christmas 2009 finds the pair duetting on Davies’ Postcard From London.

Where better to finish than the mighty Classic Rock Awards? During a finale to celebrate Jeff Beck’s Living Legend Award in November 2011, Hynde joins him onstage at the Roundhouse for I’ll Stand By You. The pair had previously covered Mystery Train for Sun Records’ 2001 tribute LP, Good Rockin’ Tonight.

Chrissie Hynde is interviewed in Classic Rock 199, available as digital or print editions from MyFavouriteMagazines.