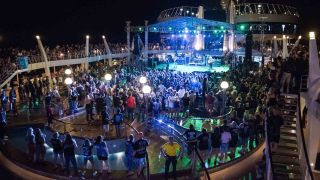 Photographer Oliver Halfin trod where brave men fear to tread, boarding the Monsters of Rock cruise in Miami to spend several days in the company of some legendary rock bands and several thousand fans. Here are his highlights.

Late at night, Tesla’s Brian Wheat spots his picture pinned high on a fans door. He knocks, only to be told, “Not now!” by the disgruntled fan.

The Boys Are Back In The Bahamas – Black Star Riders play the pool stage.

Europe’s Joey Tempest gives us some love at the final headline show of the MOR Cruise.

Tom Keifer and his band moments before hitting the stage and playing a fantastic show in the Theatre.

An exhausted Tom Keifer is joined on his dressing room floor by Frank Hannon after a storming show.

Y&T get in the pre-show zone before going on.

Brad Gillis, Y&T and Frank Hannon hang out in dressing room after Y&T play the very final show of the MOR Cruise.

Tesla get lost below deck on their way to the stage.

Eddie Trunk takes the official ‘Black Out At Sea’ photo with the crowd.

A triumphant Tesla after their first show of the Cruise, apart from Brian Wheat, who appears to have disappeared.

Billy Sheehan and Mike Portnoy warm up before the Winery Dogs first show of 2015.

Derek St. Holmes, a.k.a. ‘The Voice Of Ted Nugent’ plays Stranglehold with Whitesnake guitarist Joel Hoekstra on the pool stage.

The Cruise docks for a day trip – Van Halen cover band Atomic Punks play all the classics on an island in the Bahamas.

Queensryche play Empire to a full top deck of fans.

2 am: Mike Portnoy and Eddie Trunk holding court at the pool bar.

Captain Jeff Keith about to set Sail from Nassua in the Bahamas.

Tesla before hitting the stage in the theatre.

Europe just before their show, returning to conquer the states (and Caribbean) for the first time in years.