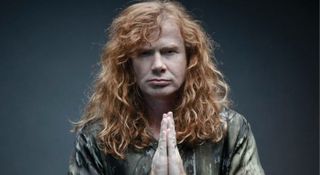 When I was in my teens I lived in Huntington Beach, California, and there was a girl called Cindy who worked at a record store. I used to sell pot, but I would trade her pot for records. She liked to come over to my house to smoke it and [makes a rude gesture], so that’s how I discovered AC/DC.

The first time I put on Let There Be Rock I was looking at the back cover and wondering ‘What the Hell’s up with that dude’s lip?’ But hearing the music, my life totally changed. To me it sounded like something was wrong, like it was too close to my face. Most records are all around you, but this one was right there [spreads his hand in front of his nose]. It was… unsettling. I remember everything, from that first millisecond, the little crackle before ‘ga-dun-GAR!’ in Go Down, to the last guitar noise at the end of Whole Lotta Rosie.

This album is in my Mercedes right now. Always is, always has been. It’s my ‘Let’s rock!’ album. Whenever I have to drive from my home in Arizona the 120 miles up to Los Angeles, this is the first thing I listen to. I’ve got radar and laser jammers on my car - hopefully no cop will read this and pull me over! – but when I can I like to drive at 100mph, and it’s always listening to this!

I remember the first time I heard the song Let There Be Rock. I couldn’t understand what ‘schmaltz’ was, and I thought this guy Bon Scott sounds like he’s got peanut butter stuck to the roof of his mouth. But I just started to really love this band: I started collecting everything I could get my hands on.

Bon was one of my heroes. His pants didn’t fit, but for me he remains one of the bad-assed-est – if ‘bad-assed-est’ is a word! – frontmen that there has ever been. I was really sad when he died. I remember exactly where I was when I heard – walking across a handball court in my school. I still respect and love AC/DC - Brian [Johnson] is an absolute star - but it’s never really been the same for me since then.

When we played with them a few years ago I gave Angus a hug, and he’s so tiny it was like hugging a little doll. Thank God for AC/DC. Great band!

The stories behind the songs on Megadeth – Dystopia

The 10 best Megadeth songs you may have overlooked