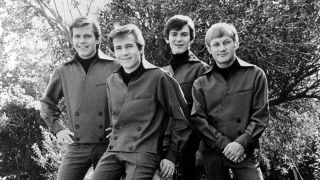 In the early 60s in El Paso, Texas, Bobby Fuller was a local hero, a renaissance man – or kid. He had his own club, Bobby Fuller’s Teen Rendezvous, led his own band, The Fanatics, ran a label, Exeter Records, and booked tours for his band and other artists. Fuller was an impresario in the making.

By 1965, burning ambition lured him to Los Angeles, where he got drawn into the Mob-tied music business. The Fanatics fell in with Bob Keane, a smooth operator with links to guys named ‘Handsome Johnny’ and ‘The Chin’, signing with his label Del-Fi Records and rechristening themselves The Bobby Fuller Four. But chasing the brass ring meant compromise, in the form of payola, favours, tie-ins and endless back-scratching.

Their second single, a cover of Sonny Curtis’s I Fought The Law – released at the end of 1965 but not making an impact until the start of 1966 – gave them a US Top 10 hit and made their name. Fuller described his style as “the border sound”. Indeed it had echoes of Texas, Mexico and California – lean rockabilly, Tejano rhythms and twangy surf guitars – but it was also a response to The Beatles. Fuller was proud that he never imitated the Merseybeat style, and even wore a surfer’s cross as a symbolic amulet against the British Invasion.

In summer 1966, the Fuller Four had just come off a gruelling three-month tour. They were exhausted and sick of each other. And Bobby was sick of how Keane was adding unwanted flourishes such as syrupy strings to his records without his consent, and grooming him as a solo pop singer. Bobby made it known that he was ready to pull the plug on everything and go back to his El Paso empire.

On July 16, the band and Keane were set for a big meeting to hash out the future. That afternoon, though, Fuller was found dead by his mother in her Oldsmobile, parked outside his apartment. There were smears of dried blood around his chin and mouth. His usually perfect clothes and hair were messed up and soaked with gasoline. His right hand was clutching a rubber siphoning tube. According to a dashed-off autopsy report, 23-year-old Fuller used that tube to commit suicide by swallowing half a gallon of petrol.

That explanation satisfied the local police, who closed the case without even dusting for fingerprints. But questions remained. The car hadn’t been in the parking lot 30 minutes before his mother found it, so why was Fuller’s body in a state of advanced rigor mortis? Why did Keane take out an $800,000 life insurance policy on Fuller a month before his death? How deep were Keane’s ties with the Mob? And how much did they know about Fuller’s plan to split? And wasn’t it worth exploring that Fuller was the third artist under Keane’s charge, after Richie Valens and Sam Cooke, to die in strange, disputed circumstances?

Of all the big ‘what ifs’ in rock history, there is none more tantalising than ‘What if Bobby Fuller had escaped that LA scene and gone back to Texas?’ Like his hero Buddy Holly, who also died criminally young, there was surely more amazing music to come. Maybe Bobby Fuller would have become a kind of Lone Star Sam Phillips and 1966 would now be famous for his American Invasion of Britain?