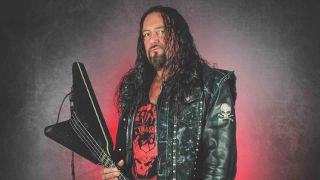 “You can’t predict the future. Most people have a contract or something at their jobs; you always fear what’s happening tomorrow.”

“As a singer, to keep my voice strong I drink at least three to four litres of water every day. I found that out 20 years ago and haven’t lost my voice once since!”

“It would be one of the festivals we played, back in the 80s. Dynamo Open Air in Holland was the first time we were just like, ‘Wow…’ Nowadays you’re used to festivals all over the world, but back then they were very special.”

What was your worst experience on drugs?

“Taking magic mushrooms in my youth, there was sone guy who was way bigger than the rest of us, so he’d have to take a double-dose. He made it into mashed potato and somehow I ended up with his portion. I was fucking tripping, man, I saw God and Satan in the same night.”

“My girlfriend loves romantic movies, so she is always trying to get me to cry! Maybe I do when I watch a really tragic movie, but I’m not a crying person; it doesn’t change anything – you need to change the fucking situation.”

Destruction are often credited with helping to refine extreme metal in the 80s. What do you see as your ties to the genre?

“We were one of the first extreme bands with evil lyrics – we wanted to piss people off and break away from normal society. We wore lots of bullets, leather and spikes – but it wasn’t for image, it was our lifestyle.”

Did you see the Lords Of Chaos movie and what were your thoughts?

“There were a lot of similarities to us! We were also from the countryside, isolating ourselves – nobody took us seriously. But we’d never go that far! The movie was surprisingly well done too; I really wasn’t expecting that.”

It’s been 35 years since your debut. Did you ever think Destruction would still be going after all that time?

“Never. We had difficult years where we were separate, but 35 years is half a lifetime; we were just hillbillies who wanted to make music. It was a window to jump out of, into a different life. Doing setlists gets more difficult with age. We have just done an album that fans really liked; it’s so hard to balance between those songs and the ones fans always want to hear!”

You left Destruction in 1990 but rejoined in 1999. What has been the best moment since you came back?

“Waking up somewhere like Tokyo after playing a great show… I have to pinch myself sometimes.”

“We did this festival called Rock El Parque – a free Colombian festival in Bogota. There were maybe 120,000 metalheads there and the moshpits looked like the eye of a hurricane. We’ve done festivals like Wacken, but the crowd was totally wild. It’s a bit like with football; in Europe we love football, in Latin America they kill for football – and kill for metal!”