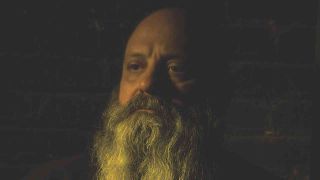 As frontman with Crowbar and a member of Down, Kirk Windstein is one of the godfathers of the New Orleans sludge scene. In 2020, he temporarily stepped away from both bands to release his first solo album, Dream In Motion. We cornered him for five minutes to get his thoughts on life, the universe and everything.

“The travelling because it gets harder on the body the older you get. Being away from home doesn’t bother me as much because my wife tours with me, which makes it a lot easier. I wouldn’t be able to do it without her!”

What’s the best advice you’ve ever been given?

“My mom told me, ‘If you wanna try and make it in the music business, keep one thing in mind – those who exalt themselves are humbled and those who humble themselves are exalted.’ If you’re a diva or an asshole, people are gonna humble you, but if you treat your fans with respect and appreciate you’re nothing without them, they’ll support you.”

When was the first time you felt like a rockstar?

“I can’t say I ever did or ever will, but the closest thing was the first time the All I Had (I Gave) video was shown on MTV back when Headbanger’s Ball was really something. I’m a humble person and I didn’t get into this to be a rockstar, but seeing yourself on MTV is surreal.”

“I don’t remember one particular experience but I did a lot of cocaine for a long time. When you can’t go out for a beer without calling the coke dealer, you’ve hit rock bottom. Luckily it wasn’t that difficult to put that out of my life; I erased all the coke dealer’s phone numbers and quit going to bars. If I wanted to drink, I’d pick up beer and sit at home listening to music. For any young kids out there – do your best to get away from [coke] as quick as possible because it’s a very dark place to be.”

“Not long ago. I’m a guy that wears my heart on my sleeve; I’m comfortable being an emotional person. I’m not boo-hooing all day, I’m an upbeat and positive person but I probably cry more often than most men like to admit. Thankfully I cry more often with tears of joy than for sad things or depression. My wife gives me a beautiful Christmas card and I’ll tear up!”

How has it taken you 30 years to go solo?

“I’ve wanted to do this for a long time but I just didn’t have the time. First and foremost, I’m a husband, father, step-father and grandfather, then I’m a full-time touring and recording musician with Crowbar. It took me years to decide to do it and then it took two years to complete because I had such little free time, it averaged out to a song every two months. It was a very long process but it was very relaxing working at my own pace.”

How does your solo material compare to Crowbar?

“I call it ‘light Crowbar’; it’s a lighter side of my writing personality with the same emotionally heavy and moody vibes, but it’s not sonically heavy or in-your-face aggressive like Crowbar. It’s much more laidback but it’s heavy in its own way.”

On that note: how’s the new Crowbar stuff sounding?

“It’s coming out amazing. We’ve been writing since the late summer and we’re already recording the music for track eight. In my opinion, it’s a mature Crowbar 30 years later but it still sounds old school. It reminds me more of Odd Fellows Rest than any record we’ve ever done because the tempos are slower, but it’s truly the most doomy record we’ve made; we’re known for mixing in a lot of hardcore beats and faster stuff but this one is a lot of dark, melodic doom.”

If you could have five minutes with another musician, past or present, who would you hang out with?

“Phil Lynott from Thin Lizzy. I would like to go to the pub with him, listen to tunes and talk music. He’s my favourite lyricist of all time and he’s a huge influence on me. He lived his life the way he wanted and his legacy is still strong, but to lose such a great talent at such a young age is a really sad thing.”