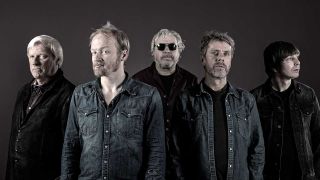 On May 4 this year, London's iconic Palladium venue will play host to The Analogues, a Dutch five-piece who've become known for their precision-tooled performances of Beatles albums.

In a world filled with tribute acts who might look the part but fail to deliver on the sonics, The Analogues are the method actors of the genre, leaving no stone unturned in an effort to make sure every single note is a precise replica of the original.  And at this show they're playing The White Album in full, exactly as it was meant to be heard.

“As someone once said 'if you want to see a Beatle go to McCartney, but if you want to hear The Beatles, go to The Analogues,'" says drummer Fred Gehring. "It's not something we would dare to suggest ourselves but deep down that is our mission: ignore the visual impact of wigs and costumes and focus completely on the sound."

And they've found support from within The Beatles camp, from the late Geoff Emerick, the band's engineer, who said of The Analogues, "I’ve witnessed something I never really thought I’d be able to witness again."

The Analogues play The White Album at London's Palladium on May 4. Tickets are on sale now.

1. The Analogues own a wide selection of vintage instruments that replicate those owned by The Beatles. The first instrument they acquired was a Lowrey Heritage Deluxe on eBay. Upon opening, they found two sets of mice nests inside the organ.

2. They also own a black-and-white Rickenbacker-guitar like John Lennon had, a light blue Fender Stratocaster like George Harrison's and a Höfner violin bass as used by Paul McCartney – and even a one metre long harmonica present in The Fool On The Hill.

3. The band now requires two full-size trucks to transport all their gear.

4. When The Beatles’ chief engineer Geoff Emerick first came across The Analogues online, he believed the band had stolen samples from original songs and played along to them.

6. The band spent months searching for the right harpsichord to use on The White Album, even though it only appears on one track, Piggies. They found it.

7. The Beatles themselves never toured with this material... but The Analogues do.

8. Whilst putting The White Album show together, a team was sent on the road to collect original, numbered white album sleeves to include in the show. The personalised, sometimes damaged sleeves, with coffee stains, small notes or drawings, make a lively backdrop and have the audience checking if they can recognise their copy.

9. They instigated a viral campaign to help locate the exact bell sound from Everybody's Got Something To Hide Except For Me And My Money, listening to every submission on the phone (they eventually found it in a Maritime store).

10. The biggest challenge around The White Album was bringing to life Lennon’s avant-garde sound collage Revolution #9. To do this, they re-created the entire eight plus minutes piece from scratch, and even had a film made to be show alongside it.