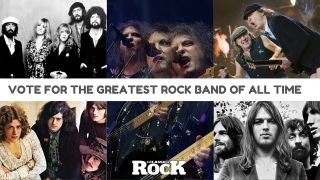 From the guitar pioneers of the electric blues, to the glam rock stompers of the 70s, all the way through to the Seattle grunge which tore through the 90s and beyond, rock'n'roll music has had an immeasurable impact on culture as we know it. But, ever since mankind first started coaxing solos out of electric guitars and thumping tubs with sticks of splintered wood, debate has raged about who the greatest rock band of all time really is.

Well, now we're on a mission to find out, and we need your help. We've assembled an (extremely long) long-list of bands and artists we believe to be worthy contenders, and now it's over to you to let us know who you think deserves to be crowned the mightiest of them all.

We've tried our best to include ample representatives from every corner of rock's sprawling globe, but of course, no list like this is ever going to be exhaustive. So, we've also included an option to add your own entry, and you can nominate anyone you think we've forgotten at the bottom of the form.

Each voter is given five votes, so think hard and make them count. We'll be publishing the results in the coming weeks, so make sure to check back for the final 50, as voted by you.