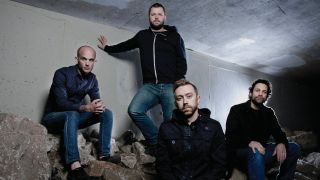 Rise Against were in Los Angeles on the Warped Tour when they heard that their fourth album, 2006’s The Sufferer And The Witness, had entered the US Top 10. It was a strange place for a politically charged, largely straight-edge punk rock band from Chicago to find themselves, especially one as anti-establishment as they were. But there it was, right in front of them: the result of a decade or so of manning the barricades.

“It was weird,” says vocalist Tim McIlrath. “But it never felt like overnight success. The numbers never doubled. Things just got steadily bigger. People followed us. Maybe they were thinking, ‘This band is getting bigger – let’s wait and see how they fuck it up.’”/o:p

Rise Against didn’t fuck it up. They became the first band since Rage Against The Machine to shout above the crowd and make their voice heard, tackling such topics as the War On Terror, environmental collapse and homophobia. /o:p

“From day one Rise Against had this inspirational, positive vibe that seemed to be missing from other bands at the time,” says bassist Joe Principe. “It was refreshing.”/o:p

The record that introduced Joe to punk was The Ramones’ Subterranean Jungle when he was in fourth grade. “My older sister recorded the movie Rock ‘N’ Roll High School off MTV,” he recalls. “I watched it over and over and eventually had my mom take me to a record store for a Ramones cassette.”/o:p

For Tim, it was Minor Threat’s Complete Discography, a posthumous compilation from the Washington DC straight-edge pioneers. /o:p

It was their political and puritanical zeal that grabbed young Tim’s attention. “A band like The Sex Pistols were this gnarly, nihilistic punk band; there wasn’t a clear message apart from one giant middle finger,” he says. “But Minor Threat had this message. There was something legitimate about their anger and angst.”/o:p

Punk had been a fringe concern in Chicago in the ’80s, but by the early ’90. it had gained a proper foothold. By the mid-’90s, both had their own bands. Tim fronted Baxter, who were the classic early doors opening band for any punk rock tour passing through Chicago. Joe was a member of 8. Fingers Louie, who had reached proper ‘local hero’ status on the Chi-Town scene and were being touted as The Band Most Likely To… But by 1999. 8. Fingers Louie had fallen apart. /o:p

“I was doing the classic ageing punk thing and moving into indie rock,” says Tim. “I saw a lot of those bands. Some were good, but most of them were poor. The stuff Joe was writing was the sort of the stuff that wasn’t cool to do in Chicago any more, the unrefined punk stuff. It was, like, ‘Let’s go scream in people’s faces.’”/o:p

Transistor Revolt found they were hitting a nerve with local punk fans. They released an EP, drawing the attention of out-of-town movers and shakers. One of these was Fat Mike, NOFX frontman and owner of punk rock label Fat Wreck Chords. Mike offered Transistor Revolt a deal on one condition: they change their name./o:p

“He > said, ‘Dude, that name sucks,’” says Tim. “None of us were dead set on it, so > changed it to Rise Against. But Mike had some terrible suggestions himself. One > of them was Jimmy Cracked Corn And The I Don’t Cares. I thought, ‘Wait, that > makes me Jimmy Cracked Corn – there’s no way I’m doing that…’”

In December 2000. the newly christened Rise Against recorded their debut album, The Unraveling, in Lafayette, Indiana with producer Mass Giorgini. With drummer Brandon Barnes on board, the band entered the studio with a real sense of purpose./o:p

“Things got a little grim in Chicago in the late ’90s,” says Joe. “Most of the bands we knew had broken up, leaving this hole in the scene for faster, more aggressive punk rock. I remember thinking how great it was to start something with a sense of hope.”/o:p

For Tim, it was an entirely new experience. “It was my first time in a professional studio,” he says. “I didn’t realise the singer only does stuff after the music is laid down, so I spent days in a dark room, watching movies. I wasn’t having a lot of input. Joe and Brandon were running the ship in terms of music and stuff. I was finding my scheme in the whole thing.”/o:p

The Unraveling was a world away from the jokey pop-punk that was Fat Wreck’s staple fare. It also proved to be the only Rise Against album with guitarist Dan Wleklinski; the band went through four more before hooking up with Zach Blair in 2007. “We kept losing them,” says Tim, laughing. “We must have been assholes.”/o:p

On September 11. 200. the world changed. For Rise Against, the attacks on the World Trade Center and the Pentagon made them recalibrate their worldview. “We grew up in the PC hardcore ’90. anyway, but 9⁄1. made us more politicised,” says Tim. “Nobody was talking about the other side of 9⁄11. which was, ‘Why were we attacked?’ America was caught up in this nationalistic fervour, and it was really controversial for us to be talking about the war in a negative way. People were pissed off. Even the punk crowd.”/o:p

The surprising reaction to Rise Against’s anti-war stance only made them dig their heels in. Their anger fuelled their second album, 2003’s Revolutions Per Minute – the sound of a band trying to keep a clear head in a chaotic world. It didn’t take long for the world to come around to Rise Against’s way of thinking. “We were seen as ‘That Political Band’ because we were the only ones talking about politics,” says Tim. “A year later, it became the cool thing to say, ‘Fuck George Bush’, and most bands were jumping on the political bandwagon.”/o:p

If RA’s decision to join the 200. Warped Tour, with its commercial punk lineup and barrage of corporate sponsorship, was surprising given their principled approach, then their decision to sign to major label Dreamworks at the end of that year was flat-out controversial. “There are people who stopped listening to us after we signed to a major label,” says Tim. “I’m sympathetic to that – I was a high school punk fan who was, like, ‘Fuck that!’ when Bad Religion signed to a major. But at that time a lot of our peers had signed – Taking Back Sunday, Thursday, Avenged Sevenfold. We were watching them and learning.”/o:p

When Rise Against did sign – initially with Dreamworks, and then, when that label folded, with Geffen – they insisted one key condition. “Our main focus was to maintain complete artistic control,” says Joe. “It’s by far the most important thing a band can get from a label. We didn’t want the most money, but the most fair deal.”/o:p

Rise Against found themselves way down the list of the label’s priorities. It turned out to be a blessing in disguise. “It felt like no one knew we existed,” says Tim. “It’s like when you turn up at work and someone gives you a cubicle in the basement. You’re there getting paid, but nobody knows you’re there.”/o:p

It took the pressure off when it came to recording their third album, Siren Song Of The Counter Culture. That record opened with State Of The Union, a furious blast of conscience-blasted punk rock that reassured anyone concerned that they hadn’t toned down their ire. But it also featured Swing Life Away, a bittersweet semi-acoustic ballad. It was a brave move, and a controversial one in the eyes of older fans, yet it helped its parent album become one of the sleeper hits of the year./o:p

The Sufferer And The Witness in 2006 gave them their first Top Ten record, 2008’s Appeal To Reason went Top Five and 2011’s Endgame entered the US charts at number two. Popularity wasn’t diluting their message – if anything, it was strengthening it. “I saw myself as a voice for where the punk scene stands on issues like the war,” says Tim. “I felt like nobody was talking about it.”/o:p

But for all their success, by the late noughties Rise Against found themselves in a strange position. “All the bands we were friends with, who had signed before us and got more press than we did, who were expected to do bigger things than us, were splitting up or getting dropped,” says Tim. “It felt like a lonely place.”/o:p

In 2013. Rise Against aren’t quite the last men standing, but they’re in a minority in terms of being a successful punk band and a group with both principles and a clear message. In many respects they’re a band out of time. /o:p

Tim and Joe disagree as to whether Rise Against ever crossed the line into preaching. “The music is the vehicle for the message,” says the bassist. “They go hand in hand.”/o:p

“Yes, we have crossed that line,” counters Tim. “When you fuse your musical ambitions and political endeavours, you always walk that fine line between making someone aware and preaching. We’ve certainly fucked up in the past.”/o:p

A new album, Long Forgotten Songs, compiles various EP tracks, B-sides and cover versions. It’s as much of a snapshot of the band’s growth as their studio albums, and it stirs strong emotions for the men who made it – not least a sense of pride./o:p

“Long Forgotten Songs is a reminder of where we came from and how much we progressed,” says Joe. “It gives me a real sense of accomplishment.”