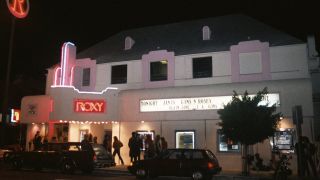 Never before has one and a half miles of pavement defined an era of rock quite like the Sunset Strip. A living cultural landmark — one that even has its own twitter account — has become as famous as the bands who played it.

The 60s and 70s had The Doors and Frank Zappa, but the 80s grabbed the zeitgeist by the scruff of the neck and gave it a firm shake and as It went from underground to overground. The streets were soon lined with record deals, as bands flocked on from all over America to get a piece of the action. /o:p

The bands were flashy, androgynous, visually compelling and musically engaging. They stumbled their way through the strip circuit doing their best to destroy the ozone layer - putting the hair in hair metal. /o:p

God may have given us Rock’n’Roll… but the strip gave us this lot.

Van Halen – Godfathers of the strip/o:p

Rewind 40 years ago this year and a band of Pasadena hopefuls known as Van Halen, played their first gig in Hollywood at Gazzarri’s club, having initially being turned down three times by the club. After three years of playing covers at Gazzarri’s they eventually landed a gig at the notorious Starwood – now they had to play original material. The Whisky soon followed, as did their world wide success and the accolade as the Godfathers of the Strip. /o:p

If Halen are the Godfathers, Crüe are its Princes and these unlikely poster boys of hair metal, with their music and image, became the blueprint for the scene; drugs, drinking, women and having a party. They chewed up the Strip’s rock’n’roll past and spat it out in their own little way making them the most notorious of its inhabitants. They were thinking of calling themselves Christmas, but thankfully they went for Mötley Crüe, which now sums up that whole generation.

They put the fun into the strip with their catchy pop metal anthems, committing every rock cliché - the fistfights, jail, smashing up sports cars and crazy debauchery with women. Their songwriting on tunes like Unskinny Bop and Every Rose Has Its Thorn (about a stripper that broke Bret Michaels’ heart) may have come second to the image, but their fame went well beyond the Strip. /o:p

When they played the infamous Whiskey A Go Go, legend has it that they threw real rats into the crowd. Ratt was one of the first glam metal bands on Sunset Strip to help shape its sound in the early 80s. Singles like Round And Round put them on the harder edge of the scale, with more leather than spandex. /o:p

They made Mötley Crüe look like choir boys with their wild antics both on and off the stage. During their short time they opened for bands such as W.A.S.P., Poison and White Lion but unfortunately they never quite scaled the giddy heights they should have. Check out their album The Hex Is On, it’s a classic from this period. /o:p

Guns N’ Roses may have acted as a catalyst for the grunge tsunami that was about to hit; their hair was smaller, their make up lighter and their music oozed a ‘don’t mess with me attitude’. They weren’t dubbed the most dangerous band in the world for nothing. Their first gig on the Strip was at The Troubadour, and just three people turned up. Oh, how things quickly changed. /o:p

Less showmanship and more musicianship is what Dokken offered. They enjoyed moderate success with Dream Warriors, which was effectively the title track for the 87 movie A Nightmare on Elm Street 3: Dream Warriors. It was internal wranglings that resulted in their early demise, not lack of talent. /o:p

They may have been late to the party — 1989 to be precise — but they were one of the best bands the Strip gave birth to. Their eponymous debut album was produced by Don Dokken. However, Dokken’s luck didn’t rub off on them and they’ve become lost in the fog of time. /o:p

Most Christian bands rise from the church scene, but Stryper came from the Sunset Strip. Originally called Roxx Regime, they lived by the rock’n’roll bible until their wayward ways got the better of them and they turned to god. Poison’s C.C DeVille almost joined the band./o:p