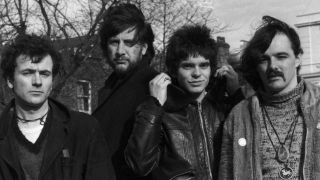 JJ Burnel and Jet Black have recalled the time The Stranglers decided to take heroin for a year – leading to bassist Burnel deciding to commit suicide.

JJ Burnel and Jet Black have recalled the time The Stranglers decided to take heroin for a year – leading to bassist Burnel deciding to commit suicide.

They began taking the drug on a daily basis while making fifth album The Gospel According To The Meninblack in 1980.

As the band mark their 40th anniversary, Burnel tells The Guardian: “It was an artistic decision to see what would happen. Jet and Dave Greenfield were sensible, and quit after a day – Hugh Cornwell and I didn’t. We headed into a surreal, dark, necromantic abyss.

“One night I was so blessed out I thought it would be wonderful to die. I wrote a lovely suicide note, took loads of heroin – and woke up three days later. The band hadn’t even noticed I hadn’t been in the studio.”

The Meninblack explored the concept of aliens visiting Earth – and drummer Black recalls a chain of mysterious happenings while they worked on the album.

He says: “It was based on this phenomenon, back then known only to a small coterie of UFO obsessives: that people who saw UFOs were visited by strange people wearing black to shut them up.

“As soon as we started making the album studios blew up, tour buses broke down and gigs became riots. People working for us dropped dead. We were convinced something occult was going on.”

After looking back on the band’s chequered history, Burnel notes: “You might well ask why we’re still here. The latest tour is our biggest-selling ever. We’ve done all the wrong things, but they turned out to be right.”

The Stranglers are on the road until the end of the month. An 11-disc retrospective box set, Giants And Gems, is released via Parlophone on March 24.