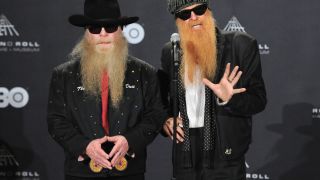 Twenty-five years ago, a funny thing happened to ZZ Top. Shortly after ‘that little ol’ band from Texas’, formed in Houston way back in 1969, released their eighth album, Eliminator, they became the unlikeliest of superstars.

ZZ Top have always proudly exhibited their Texan heritage; literally so on 1976’s Worldwide Texas Tour, when you had local livestock and rattlesnakes on stage. What does it mean to be a Texan band?

We’ve been trying to figure that one out for a long time… there’s something quite attractive in calling Texas a place to be from. It’s kind of challenging to try to nail it down, to define what is so valuable about Texas as a place. Musically it’s very diverse. And I guess one thing that makes it special is that there really isn’t a whole lot to do around here other than pick up a guitar and make music.

Is there a mind-set that’s unique to Texas?

Oh, sure. There’s still a little of that gunslinger mentality in the air. There’s a competitive attitude: I can play a guitar better than you. But there’s also a real robust camaraderie between musicians in Texas. It makes for a great atmosphere to work in. There’s a freedom of exchange between musicians. We share knowledge.

Did ZZ Top feel an affinity with southern rock bands such as Lynyrd Skynyrd and the Allman Brothers?

Yeah, we did. There was a big flow of groups that jumped out of that scene in the late 60s – the Allman Brothers, Marshall Tucker and Lynyrd Skynyrd – all from way down south. There was a good blend between those groups, and there was a certain identity from band to band, an identifiable quality within their work. We definitely related to that.

Were you friendly with those bands?

On an early tour we went out with the Allman Brothers and Lynyrd Skynyrd; you had Texans and southerner. That was pretty interesting! But we all got on pretty good. There was a common thread between all of us – a blues styling, blues phrasing in our music. We all had an admiration for a peculiar art form called the blues. And that was the key to an understanding between those bands.

They certainly were serious! And they also had the bonus of finding in Gregg Allman a great singing voice. He still possesses that today. In one sense, for a guitarist such as myself, it’s easy to play the blues: you put your fingers in the right place on your guitar and the instrument does the rest. But when you can sing the blues and sing it with real honesty… that’s something special right there.

There’s certainly some great, soulful singing on ZZ Top’s classic blues songs: A Fool For Your Stockings, Sure Got Cold After The Rain Fell, Blue Jean Blues…

Well, Dusty and myself we’ve shared the singing, and we’ve always felt that it’s the greatest challenge. Singing is strictly an individual thing and you gotta dig down real deep to get it.

One of the essential differences between ZZ Top and other southern rock bands is your sense of weirdness. Is this a legacy of the late 60s, when you led the influential psychedelic rock band the Moving Sidewalks?

Well, when ZZ Top got together we discovered pretty early on that we were not going to be able to succeed by trying to emulate the likes of Bob Dylan. We were different. There are some very strange things on ZZ Top records.

None stranger than Heaven, Hell Or Houston (from 1980’s El Loco album) – your vocal is one long and rather sinister phone call. Even Dusty Hill has admitted that nobody understands that song.

Heh heh heh! It’s certainly true that Heaven, Hell Or Houston comes out of a very strange place. Let me say this: you’ve definitely touched upon a resonant theme within this band – that element of ‘weird’. And it’s one of the things that keeps this band together, that keeps us going after so many years. Maintaining something of a sense of humour and a sense of ‘weird’ is one of the things we like the most.

After the madness of El Loco you went mainstream with Eliminator. Is it true to say that album changed your life?

Without a doubt! That record was certainly a different kind of offering from our end. We decided to concentrate on good tempo, good timing. And the big thing was that we had all these exotic new gizmos to make music with. Of course, the saving grace of going in that direction was that we decided to throw the manual out the window. We just tried whatever sounded good, what makes sense sonically.

The essence of ZZ Top was maintained: that record was still created with a guitar band in mind, with elements of the blues form. But the major difference was that this was ZZ Top doing pop music. And I must say it’s a pretty spiffing reissue.

Nice plug. And there’s the new Live In Texas DVD coming out too…

Yes. The wonderful people at our management company said: “How about filming a show for a DVD?” And we said: “Great. Next year?” And they said: “No, in 48 hours.” It’s like I said earlier, we like to do things a little differently.

One hot car, three hot girls and some funny hand signals turned ZZ Top into one of the biggest rock bands of the 80s. The videos for Eliminator’s Gimme All Your Lovin’, Sharp Dressed Man and Legs established the trio as the coolest stars of the MTV era. But, as Top bassist Dusty Hill admits, it all happened by accident.

“We didn’t know what we were doing with Gimme All Your Lovin’,” he reveals. “We just thought: ‘Let’s have a fine hot rod and some pretty girls in the video, with us going in and out.’ But after five takes we got kinda bored of watching the car go by, so we started goofing off. Frank [Beard] said to do that gesture with our hands, and that’s how it happened. And even now, everywhere I go people still do that to me!”