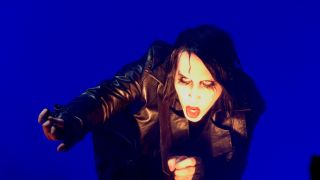 The air conditioned elevator takes us up to the heart of darkness. The curtains in the tastefully anonymous room are drawn and the lights are dimmed. Manson sits curled up in a chair, sunglasses on, sipping a glass of sickly green absinthe that actually looks a lot like that horrible chalky indigestion medicine. He has just recently risen. From bed, not the grave. Manson is nocturnal but because of the jet lag he has to create his own night in the hotel room. It is only mid-day.

Absinthe for breakfast. Of all things…

Of course it’s all theatre, a personal performance to be reported faithfully to you folks out there in record-buyer land. And reader, even if it was the case, you don’t really want to hear that he was wearing old Adidas trackies and a stained T-shirt and didn’t have a lick of make-up on his face? If you were ever in any doubt, Marilyn Manson is now Marilyn Manson 24 hours a day every day.

During a previous stint – almost in a previous life – when Hammer met Manson while he was struggling to promote 1994’s Portrait Of An American Family there were a few people in the band and the entourage who referred to him as Brian. Today there are none who would dare to address him as such. But given that his activities now encompass painting, film-making and writing, is there any possibility that some of this work may come with a Brian Warner signature rather than a Marilyn Manson one?

“I think that is all just a matter of semantics,” he says thoughtfully. “For a while there I had no sense of my own identity, or rather I felt that I had lost sight of who I actually was. That was a struggle but now I feel that I have a very clear idea of who I am and what I do.”

He sips the absinthe.

Brian Warner exists in the same way that our appendix still exists: as an unused and forgotten vestige of a less evolved past. Manson’s transformation is total.

We meet on the day after that Korean nut-job Cho has massacred a whole bunch of his fellow students at Virginia Tech. Maybe the Manson fan-base is now a bit older and goes to college and university rather than high school? We ask Manson how long he reckons it will be before the media hang the blame upon him.

“When I was watching the coverage of it I kept asking myself, ‘What is the agenda here?’. It’s always interesting to look at what else is happening in the world at the moment: a lot of people killed in Iraq today, a lot in Afghanistan, that hasn’t really made the news,” he muses. “I also kept thinking about that film – which I haven’t seen yet, but friends of mine are talking about a lot – 23. Y’know, he killed 32 people, he was 23 years old…”

Are you still regarded as a figure to be feared in the US, though?

“I don’t know,” he sighs. ”It’s not something that I can spend a whole lot of time thinking about one way or another, and even if it’s a good thing or not.”

Alas poor Manson. One minute you are being blamed for high school massacres, the Satanic moral degeneracy of ‘Generation X’ (remember them?) and the rising tide of black nail polish on the hands of lardy high school jocks. The next you are just another B-list tabloid horror show like Britney or Lindsey, or Jade Goody. Over the past year Manson has been all over the pages of Hello and Grazia and all those other dumb ‘sleb’ mags that are read by people who move their lips while they read, and that have never knowingly heard a note of his music. Manson almost slipped into that niche of being famous for being famous. There was his celeb marriage to burlesque queen and fashion designer Dita Von Teese followed by their high profile break-up, and his current relationship with 19=year-old actress Evan Rachel Wood, star of the underrated ‘weird’ 90s TV show American Gothic, as well as recent independent hits like the disturbing Thirteen.

Manson’s creative energies seemed to be going into his paintings and into a film project called Phantasmagoria that he was planning to direct, a look at the dark side of author Lewis Carroll and his Victorian bestseller Alice In Wonderland. There were hints and rumours that he was planning to quit music altogether, rumours that he now says were not entirely without foundation.

Manson told Rolling Stone magazine that he was going to make a bold move from music to filmmaking: “I just don’t think the world is worth putting music into right now. I no longer want to make art that other people – particularly record companies – are turning into a product.”

“I was very serious because, as I’ve said, I had lost sight of who I was,” he says, sounding languid. “As an artist or a performer I’m supposed to be able to make a lot of people feel a certain way. But the one person who was closest to me was the person I couldn’t seem to reach at all, and it made me wonder what I was doing it all for.”

The split was acrimonious. They aren’t ‘just good friends’ or any of that crap. He seems at once eager to put it behind him and to rake over the sordid details. After a period of reassessment and – frankly – some heavy drinking and partying, Manson reached some moment of clarity around the end of last year and started work on a new album. The resulting Eat Me, Drink Me may not be his best work ever, but the fact that it exists at all is certainly at least some cause for a bit of celebration.

“It’s the most straightforward album I’ve ever done,” he says, perhaps not for the first time today. “There wasn’t a lot of agonising over the concepts, because this time the songs were being written about me. When it starts off, ‘Christmas morning 6.30…’ that’s actually when the song was written.”

The title and some of the songs on the album allude to Alice In Wonderland [when Alice goes down the rabbit hole, she finds a cake labelled ‘Eat Me’ that makes her grow and a bottle labelled ‘Drink Me’ that makes her shrink]. Hammer asks him if this is in some way connected to the film project.

“No that wasn’t in any way intentional. It’s just that these were things that I was thinking about a lot at the time that I wrote the songs, and they had some resonances with my own life,” he says. “We’re going to start shooting the film in October but it is entirely unconnected to the album.”

He has also just made a video for Heart Shaped Glasses using Titanic and Terminator director James Cameron’s 3D software. It is an extract from a 3D horror movie which apparently Manson will continue filming with Cameron.

“It looks totally amazing. It was a lot of hard work, but I can honestly say that I have never seen anything quite like it,” he says. “It’s also I believe one of the most expensive promos ever made. Evan is in it and she got the highest fee ever for a promo.”

How much was it?

Was it… one million dollars?

Manson laughs at that: “Yeah, but I see that the dollar is way down against the pound so maybe that isn’t too impressive.”

“We’ve already been talking about one script [King Shot] that he has that he wants me to appear in as a 300-year-old pope,” says Manson, becoming animated, almost excited for the first time. “But he’s also written another script, a sequel to El Topo [his 1970 classic], that he wants me to star in.”

“I mean I have got to make this happen, we have got to get the money to do this” he says shaking his head. “For somebody like Jodorowsky who has meant so much to me and to find that he is enthusiastic about me… it’s really mind-blowing.”

If the album is a lot more basic and straightforward than your previous ones, does this mean that the stage shows will be toned down?

“No, the opposite,” he says. “We’e got the guy who designed the Diamond Dogs show for Bowie in the 70s doing the sets. It’s going to be spectacular. When I wrote the album I really had this stage show in mind. I had already decided that If I Was Your Vampire would be the opening song in the set.”

Interesting that Manson has written his first vampire song: that was one aspect of the whole goth package that he consciously seemed to steer clear of.

“I think I agonised too much over that, and yes I very much avoided that in the past,” he says.

He’s on record as saying that it’s the new Bela Lugosi’s Dead which may come as good news for the undemanding but bad news for those who see Manson as something more than just another goth cliché. It’s easily the strongest song on the album.

But as much as Eat Me, Drink Me was inspired by his break-up with Dita, it’s also about his relationship with Evan Rachel Wood.

“I used to wonder why my life couldn’t turn into one of those movies like True Romance or Bonnie And Clyde that I loved so much, why there wasn’t that massively romantic ending for me,” he says.

“I think what amazes me about her is the fact that she finds so many of the things that I do so cool. Like, we went to the London Dungeon last night. And for the cover shoot I covered a room in my house in blood and she loved it, so I’ve just kept the room that way.”

“No. If I used that much of my own blood I’d be dead,” he cracks a smile. “I’m looking forward to seeing headlines about me spraying my room with blood.”

“No, but the one thing that gets me… it’s all over the windows and you can see right in, yet none of the neighbours has actually said anything,” he says. “If I saw that in one of their houses, I would definitely have called the cops by now.”

This was published in Metal Hammer issue 167.