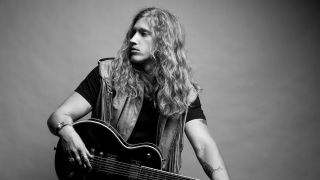 Various vintage acts, including Johnny Winter, Mountain, Skynyrd and Grand Funk are channelled on your debut album Old Glory And The Wild Revival, and yet you’re just twenty-five years old.

I was well-educated by my parents. I never understood why my friends liked bands that had no grit whatsoever.

Can we hear a little of Glenn Hughes’s early band Trapeze in there too?

Absolutely. I’ve listened to a ton of Trapeze. I’ve been told that Glenn loves my record and is looking forward to some jamming. If that’s not a good sign, I don’t know what is.

Yeah. I grew up near the Alpine Valley Music Theatre [the scene of SRV’s final show], and each year on the anniversary of his death, a friend and I would climb the fence with our guitars, stand centre-stage where Stevie had once been and play his songs all night.

Producer Eddie Kramer, who worked with Hendrix and Led Zep, worked on your record. That won’t do you any harm.

Man, what a trip. How lucky am I? I learned more about making music and being a performer with Eddie in two weeks than in all of my previous years.

After supporting Lynyrd Skynyrd in Germany, Gary Rossington invited you on stage to jam on Sweet Home Alabama.

One by one, those guys started arriving at the side of the stage. By the last song, all of the guys were standing there. No pressure! And getting to play with them, halfway through Gary said: “Take the solo, man.” I closed my eyes and went for it. What a great moment