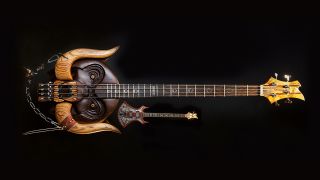 There have been countless tributes to Ian ‘Lemmy’ Kilmister since his untimely death last year, but probably none as spectacular than the two beauties pictured here. Commissioned by Bloodstock festival founder Paul Raymond Gregory and designed and built by American artist-cum-luthier Cynosure, the ‘Lemmy’ and ‘Motörhead’ basses are unique one-offs that capture at least part of what makes both Lemmy and his band so iconic.

The ‘Lemmy’ bass, depicting the Warpig that adorns zillions of T-shirts around the world, is simply superb. The body is fashioned from a single piece of wenge, an extremely dense variety of tonewood, and its dark brown hue contrasts perfectly with the lighter zebrawood tusks and teeth. There’s even a ring through the pig’s snout, and the irises of the eyes double as volume pots for the two Fender pickups. Fittingly spades adorn the fingerboard, and overall the bass is so cool it hurts.

Cynosure was given a freer rein when it came to the ‘Motörhead’ bass, and opted for this none-more-spiky design. With an elegantly contoured body constructed from a mahogany laminate veneered with Peruvian walnut, and capped with a custom textured steel plate, the theme is a nod to Lemmy’s fascination with the German military of WWII. Two custom-weathered Lace Alumitone pickups provide the power and, again, this is a real eye-popper. Yes, the Totenkopf emblem adorning the headstock is controversial, but that was Lemmy: take him or leave him.

“Both designs are one-of-a-kind and I will not reproduce either of them,” Cynosure exclusively tells Classic Rock. “I’m open to creating a custom instrument using the same shape as the Motörhead bass, but such an iconic design as the Warpig can only remain as a commemoration. Due to their complexity and exclusivity, and factoring in labour costs, I’d suggest a rough figure of £7,700 for each,” he says of a theoretical sale price.

That figure is irrelevant, though, as these unique basses are all about the vibe, which they possess in spades. Rest in noise, Lemmy.

LEMMY’S SONIC OVERKILL: A unique tone for a unique player

Lemmy used 4000 Series Rickenbacker basses almost exclusively, and all underwent some serious customisation along the way. The most notable additional to his original instrument was the inclusion of a pickup from a Gibson Thunderbird bass, which added some firepower to the Ricky’s notoriously ‘honky’ tone.

It’s likely to have been more by chance than design that, when plugged into Marshall Super Bass amps run pretty much flat out, the Motörhead sound was hatched. Lemmy would link two amp heads together, whack up the middle and dial out most of the treble, and each amp was subsequently fed into a pair of cabinets – a 4x12 and an outsized 4x15 – and that’d be it.

According to Lemmy, it’s easy: “Turn it up quite a bit and hit it really, really hard.” Good advice.