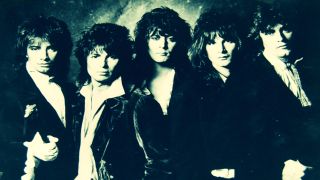 “Midnight sure looks better than daylight” - All Belongs to You

The Waysted story is such a mad tangle of bleary-eyed visionaries, wretched hangers-on, drug-wrecked animals and high falutin’ arena rock stars that it gives me a headache just thinking about it. So, in the interest of brevity and levity, here’s a truncated-but-thorough rundown of the events that led up to the rather brilliant sleaze metal classic, Vices.

Maybe you remember UFO, or maybe you’re too young to remember UFO, but your rock n’ roll reptile hind-brain surely tells you that you’re supposed to know who UFO was. Either way, they were a UK hard rock band - no other way to describe it, really - who were enormously popular back home, slightly-less enormously popular in Europe, the biggest band ever in Japan, and pretty close to a perpetual ‘cult act’ here in the US. There’s one million stories to tell about UFO, but let us not stray from the subject at hand. In ’82, UFO released the tepid Mechani, an out-of-touch arena rocker filled with simpering, lighter-baiting ballads like Terri and Back into My Life, but it sill managed to do good business here, there, and everywhere. Then again, Triumph and Uriah Heep were both flyin’ high in ’82 as well, and bands were still wearing tight white satin pants, so don’t take too much stock in who was selling tickets back then. Certainly, charismatic UFO bassist Pete Way knew the score, because he split his band of 13 years right after their US tour with Ozzy, determined to get a band together that actually rocked.

I guess it’s up to the listener to decide if Fastway, the band Pete formed with Motorhead’s Fast Eddie Clark and some frizzy-haired, skinny Irishman (Dave King, ex-Mama’s Boys) actually rocked or not. I’m sure you remember their semi-hit Easy Living, from their self-titled ’83 debut on CBS, so you can discuss it amongst yourselves. It hardly matters anyway, though, because Chrysalis, who had Way under lock and key in an ironclad contract, wouldn’t even let him be in his own band. So, Fastway continued on without one of their co-founders. It’s ok tho, Pete was busy anyway. The previous year, he had produced Twisted Sister’s seminal Under the Blade and the Cockney Rejects’ first foray into metal, Wild Ones, and shortly after his label rapped him on the knuckles, Pete joined up with Ozzy again, this time as his touring bassist. And, after the tour was over, he started a whole new band, the cleverly - and honestly - named Waysted.

Waysted’s initial line-up- the one that recorded Vices – consisted of Way, guitarist Ronnie Kayfield, drummer Frank Noon (ex-Def Leppard), keyboard player Paul Raymond (Way stole him from UFO) and iconic frontman Fin ( AKA Ian Muir, formerly of late 70’s hard rockers Flying Squad, and fulltime Scotsman). Pete still had one record left on his Chrysalis deal, so it wasn’t like he had to shop the new band around at all. The boys got together, had a few drinks, snorted a few lines, shot a few whatevers, and, in 1983, Vices was released.

The front cover of Vices looks like a still from a particularly kinky Hammer horror flick (and made it onto this site’s collection of misogynistic album covers). That was essentially their aesthetic, and the back cover band photo really nails their bodice-ripping image. Pete and the boys are all dressed up in frilly shirts and topcoats and eyeliner and white gloves, and they’ve got silver wolf-tipped canes, and with just about any other band in the world, this would look wildly absurd, but with these fuckers, it’s perfect. Waysted were the most dangerous kind of savages - noble ones. Gentlemen with blood in their teeth. Dandies in the underworld. You couldn’t have come up with a more apt image for this band, this wolfpack of seasoned, well-paid pros with a wild penchant for sin and diamond-hard sleazy rock.

Amazingly, the album lives up to the image. We don’t have the time or space to extol all of Vices’ virtues (ha!), but suffice to say, it gets the job done. It’s got Stones-y swagger rock, 70’s glam-pop, bizarre S&M themed experimental guitar-less nonsense (Women in Chains), epic, soaring flash metal, and so much more. The album ends with a masterful reworking of Jefferson Airplane’s Somebody to Love, full of power and pathos and honest-to-god urgency. At this point, you should be quite convinced that, at least in 1983, Waysted were one of the greatest rock bands ever.

Waysted toured Vices with Ozzy and Crue in ‘83, to mostly indifferent US audiences. I’m not sure why. Maybe it’s because they went back to the stripy spandex for stage wear. Regardless, that did not stop them from engaging, fully and shamelessly, in the stuff of their album title throughout the tour. As such, band members began dropping like flies, either getting fired by a (ahem) wasted Way, or just cracking under the pressure and headin’ for the hills. By ’84, almost everybody was gone. Pete recruited another back-up band of well-dressed barbarians. They recorded the meaty Waysted EP and hit the road with Dio on their legendary Holy Diver tour, which resulted in a spectacularly quick descent into bottom-of-the-barrel debauchery and drug-fueled mayhem by everyone involved (in Waysted, I mean. I’m sure Ronnie James was quite well behaved). By the time it was over, only Way and Fin were left standing. The boys managed to cobble together another band full of ex UFO and Fastway dudes and released the bluesy The Good, The Bad, and the Waysted. In 1985, Fin left the band, and Way soldiered on with the Tygers of Pan Tang dude (John Deverill) as the new Waysted vocalist, but they never got past the demo stage, and Waysted split in ’87.

Things have been up and down for Pete Way (and Waysted - who reformed in the 00s) ever since, but if anybody’s capable of a late-game rock n’ roll resurrection, it’s him. In the meantime, try Vices. And think about getting a frilly shirt and a top-coat. You’d look great in it.

A 30th Anniversary Expanded Edition of Vices is out now on Hear No Evil Recordings. An expanded edition of 1986’s Save Your Prayers is also available.