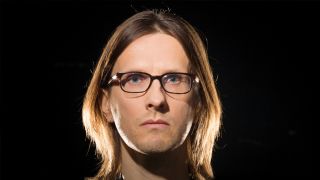 Steven Wilson has been one of rock’s most prolific and diverse artists for more than 20 years now, making music under a bewildering variety of guises. His longest-serving band, prog favourites Porcupine Tree, seemed poised to reap the rewards of their gradually growing stardom when their tenth album, The Incident, hit the US Top 60 in 2009. Wilson, declaring himself bored, chose that moment to focus on his solo career.

That reached similar heights with 2014’s acclaimed The Raven That Refused To Sing. In recent years he’s also been employed by several of his heroes, including Robert Fripp and Ian Anderson, to remix some of their classic albums.

How did you create the biography for the woman that Hand.Cannot.Erase. is about?

Every time I create a fictional character there’s a lot of autobiography and empathy there. I did live in London for nearly twenty years, and I can understand how that isolation is possible. It’s a choice of some people to be isolated and they’re happier that way. And there are times in my life when I definitely enjoy being on my own and not having to interact with other human beings.

Are some of the details of your heroine’s life in these songs memories of your own childhood?

They are. Like going down to Blackbirds Moor in the town where I grew up, to watch barges going down Grand Union Canal in the twilight. Nostalgia for childhood runs through pretty much all my music. A lot of my songs are about trying to recapture those wonderful moments of everything being fresh – the first time you heard The Beatles, or first heard Led Zeppelin, or Kate Bush. You can only ever hear those things once in your life. And that element of nostalgia can be a well of power. I’ve always clutched on to my childhood and its naïvety and innocence as something that I wanted to keep. I want to live my life like a child. Still wanting to be a rock star and make these records at the age of forty-seven is quite childish.

What impact did first hearing those records have on you?

When I was a kid, those records and those bands were like friends to me. They were largely responsible for defining my personality. I think that’s what’s missing from so much modern music – the quality that music had when I was growing up, when it was like a manifesto for living in my mind. It made me feel like there was something I could do with my life that would validate it. Things that really touch you feel like they’ve come from another planet.

Now that you live on that planet where music is made, has it lived up to your expectations?

Yes, in one respect. But of course the music business does not exist in the way that it did when I was growing up, when there was this mystique of the rock star. I don’t think it’s possible to be a rock star any more. We’ve all just become one of the guys. But music, when it really affects people, transcends the era it’s in, and you can’t plan that. I know some of my albums are going to be rediscovered – not just in this era, but hopefully for decades to come. I already feel that with The Raven That Refused To Sing. I’m not sure an album could ever have the same degree of legend as those albums I’m talking about, though. I can’t see rock ever reaching that critical mass again.

You’re using the same PR company as Pink Floyd for the new album. Are you hoping to finally reach the mainstream?

This album has songs on it that I could definitely imagine would start to get more mainstream attention. But I’ve been in this position many times before. I could write the greatest pop song of all time tomorrow but it wouldn’t make any difference because I’ve been put in this box labelled ‘progressive rock’. It doesn’t stop me and my record company trying.

Does it feel like a slap in the face sometimes, that there’s some invisible barrier preventing you from getting through?

Yes. I’ve seen many bands hailed as the next great breakthrough in rock, and within the space of one album leapfrog all my achievements and reach a mainstream audience. But most of those bands have fallen by the wayside, whereas I still have a career. There’s the story of the tortoise and the hare. The frustration is still there.

When I was starting off, I had these massive aspirations and ambitions. And the moment you come up against those brick walls for the first time, it’s heartbreaking. But things have begun to change. There is this grudging acknowledgment by magazines that used to laugh at me that I’m one of the biggest and most important cult artists the UK’s produced over the last twenty years. I feel like there’s been a war of attrition, and gradually the ice is starting to melt. In 2015 I feel more a part of the zeitgeist than ever before, because it seems conceptual rock is more acceptable. I think that’s partly because rock has itself become a marginalised form of music.

You’re an atheist and believe we’ve only got one shot at life. Is that why you seem to make music all the time and in so many different directions?

I do believe that human beings have this weird gift of whatever years we’ve got, to try to give life some significance, so it’s not just pointless. To some people that’s having kids. For me it’s trying to create a musical legacy that has meaning and will live on after me.

Do you feel that there’s not enough time, and wear yourself down to get things done?

I do feel everything is against the tick-tick-tick of the clock. It’s astonishing to me to even acknowledge that I’m the age I am. I feel like I’ve just started to do things in life, and make records that I’m a hundred per cent proud of, and I feel like there are things I haven’t even had time to start. But there aren’t enough hours to do it all.

Hand. Cannot. Erase. is released on February 27 on Kscope.