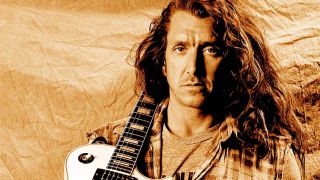 I’ve already demanded enough statues be erected in this column, but honestly, I sincerely hope that before he waddles off this mortal coil, Mr. Steve fucking Jones gets the accolades he deserves. I know, if you were in New York in ‘76 or in Detroit in ‘68 or Seattle in ‘64 or Memphis in ‘55 you think it’s a joke that the Sex Pistols ‘invented’ punk rock but whatever, man. The point is this: Never Mind the Bollocks is one of a tiny handful of truly revolutionary rock’n’roll records that not only changed the way people looked and sounded and felt forever, but also sounds as raw and vital now as it did the day it was released.

A hundred years from now some kid is gonna plop his space needle down on Holidays In The Sun and it’s gonna blow his head to smithereens. Sure, Johnny’s sneer had a lot to do with the album’s nuclear bomb capabilities but so did Jones’s brutal guitar sound, a smashed-transistor rush of belching distortion that sounded exactly as mean and tough and defiant as the man who wielded it. Seriously, the guy’s biggest influence was clearly Johnny Thunders, he pretty much stole all of Thunders’ moves, and then he wrote a song about what a “poor little faggot” Johnny was. The balls on this guy. That’s schoolyard bully shit right there.

After the predictably quick and eventful demise of the Pistols, Jonesy kept things rolling with decades of great rock’n’roll, all of it thoroughly under the radar and much of it well worth rediscovering. Along with Pistols drummer Paul Cook, Jones formed the Professionals in 1979, a sorta Hanoi Rocks-esque neo-glam power-pop band that lacked the ragged aggression of the Pistols but made up for it with big, chewy bubblegum hooks. Drugs wrecked them fairly quickly but they managed to squeeze out some great singles before going tits-up in ‘82.

Next he formed Chequered Past with three of the dudes from Blondie and Silverhead frontman Michael Des Barres. Hilariously, they were calling this one a ‘supergroup’ even though nobody remembered Silverhead and most people thought Blondie was just Debbie Harry. They released a self-titled album full of AOR-y pseudo-flash metal that was thoroughly out of step with the times and really just sounds like a particularly limp Des Barre solo record.

As the 80’s wore on, Jones was drifting further and further away from his punk rock roots. In ‘87 he released his first solo album, Mercy. And even though he grew his hair long and found his old leather jacket, he was still out there peddling bullshit soft rock.

And then, thank Christ, he bumped into Iggy. Iggy Pop was making Instinct, his biker-metal opus. He got Jones to crank out some seriously ugly guitar on that album and Jones even co-wrote a few of the songs, including the gloriously snotty rebel anthem Squarehead. It was the victorious roar of the godfather of punk and his snarliest illegitimate offspring reigniting the fire in their bellies with spit and swagger and Circus of Power riffs. Hanoi guitar-slinger Andy McCoy ended up doing most of the Instinct tour, but Jones rode along on a few dates too. After a few years in the reeds Steve Jones was back and helped Iggy make the gnarliest flash metal record of ‘88. It was basically the best summer any of us has ever had, let’s face it.

So naturally, Jones wanted to keep the motor revving. And as we rolled into the last gasp of the 80s, biker metal was where it was at. COP, Warrior Soul, Zodiac Mindwarp, Spread Eagle, Horse London, Two Bit Thief, The Cult, Four Horsemen, I mean, everybody had long hair and dangling earrings and black biker boots and snorted whiskey and guzzled gasoline in ‘89. Biker metal was glam metal gone Mad Max, basically, and 1989 was truly the Year of Manly Living. And you know what? Jones nailed it. He did exactly what you’d expect him to. Fire and Gasoline is Instinct II, basically. Ian Astbury co-produced it. Axl shows up on Jones’ cover (is it a cover if it’s his old band? Tough call) of Pistols’ rarity I Did U No Wrong. Billy Duff throws a guitar solo on one of the tracks, and there’s a Rose Tattoo cover.

I mean, c’mon. If I wanted to show a space alien what 1989 was all about, I’d play them this record. I’m not sure why it didn’t land. I didn’t even like it at the time. But it has become clear to me over the decades that Fire and Gasoline is actually one of the best albums of the era. It’s a chest thumper end to end, and thoroughly erases any ill-will Mercy may have caused.

The rest of the story is mostly thumbs-up. In the 90s he formed the excellent Neurotic Outsiders with Duff Mckagan and Matt Sorum and cashed in on his legacy with a few Pistols reunions. He also became a radio DJ, and he’s great at it. No complaints, really. So can we get this statue built now? Fat or skinny version, he looked cool either way.

Next week: WTF is a bulletboy?